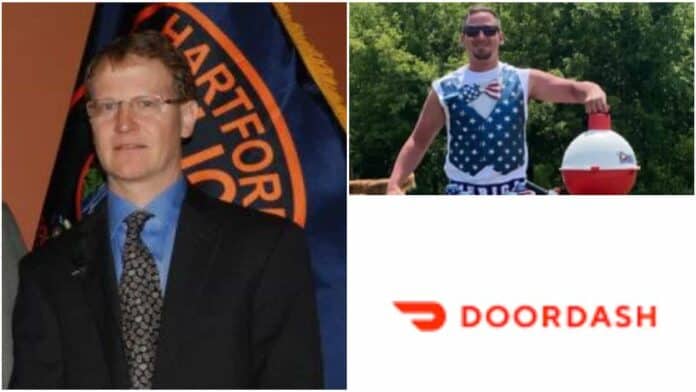 DA Mark Bensen doesn’t want to talk about the low bail in two pending felony cases for the man accused of blasting a shotgun at a DoorDash delivery driver.

Washington County District Attorney Mark Bensen is refusing to comment on the low bail that allowed the DoorDash shooting suspect John Norman to be free on two pending felony cases before the shooting.

“No comment from District Attorney on prior bonds,” Bensen’s legal secretary responded to us after we requested comment from Bensen.

Wisconsin Right Now reached out to Bensen for comment after learning that suspect John Norman was released on a signature bond and then $300 bail in two serious pending felony cases, including one for a violent crime and one for bail jumping.

In the second case, which occurred less than a week before he’s accused of blasting a shotgun at a DoorDash driver who delivered pizza to his home, Norman was released on $300 without even seeing a judge because his initial appearance was not scheduled until March 10 in the Feb. 10 case. That means that Bensen’s prosecutors likely did not recommend a bail amount in that case, although we wanted to ask Bensen questions about how that was set and why the initial appearance was so delayed. However, in the first case, also a felony, the court records say the assistant prosecutor who appeared for the state from Bensen’s office recommended the signature bond even though it involved a charge of endangering safety.

In that pending case from 2021, Norman was charged with felony vehicle operator/flee/elude an officer; third-offense OWI; and felony second-degree recklessly endangering safety. Judge James G. Pouros ultimately set the signature bond, which means that Norman was released without posting any cash at all.

The driver, who was delivering a pizza to the home, was not injured but was left deeply shaken.

The criminal complaint against Norman, obtained by WRN from Bensen’s office, says that officers were dispatched to 7462 Werner Road on Feb. 16, 2022. The DoorDash employee was in the process of delivering food to the residence when the “front door of glass shattered in her face,” the complaint says.

You can read the complaint here.

When officers arrived, they found the DoorDash driver “in severe distress as she was shaking feverishly and crying hysterically at what she just witnessed.”

A deputy approached the home and observed the front glass storm door shattered completely with glass pieces from the door all over the front porch. The deputy noticed that the main inner door had a large hole in it, which indicated something had come from inside the residence at a high velocity, causing damage to the door.

The deputy ordered Norman to exit the home with his hands up, but at first he refused. Eventually he exited. He had numerous small lacerations on his legs due to the glass shards. His eyes were watery and severely bloodshot. His speech was slurred, he was unbalanced while walking, and strong odor of intoxicants was smelled.

In the squad, Norman repeatedly asked for a cigarette and when the deputy said no, Norman said, “just DoorDash it to your squad,” explaining he had “DoorDash’d pizzas earlier” in the evening.

The complaint continues to allege:

Norman was given a field sobriety test and “showed six of six clues.” He held his arms to his side like an airplane to maintain his balance. The results of a blood draw are pending.

A search warrant was executed on his home, and a shotgun was found on the floor in front of the couch. Officers also found alcohol, including a ¼ full vodka container. A loaded Glock handgun was found.

The woman said she had been a DoorDash delivery driver for a year. “Jack N.” had ordered two pizzas. She pulled into the residence. Just as she lifted her foot up onto the step that leads to the front door, the front door exploded and glass was flying everywhere, and she didn’t even know what was happening. She ran out to her car.

Norman then told authorities that his shotgun accidentally discharged and denied knowing a deliver person was at his residence.

“You saw what happened to the house, you can figure it out,” he allegedly said.

Norman’s Facebook page says he is from Cedarburg and is owner-operator at Norman Services. He also goes by the name Jack Norman.

Bail reform has been a topic of interest in Wisconsin since the Waukesha parade attack. Much of that controversy has focused on Milwaukee County. The cases in this story are all from Washington County. Assembly Republicans voted last week to change the state Constitution because it limits judges to setting bail based on the amount needed to ensure a defendant comes to court.

The change would allow judges to consider a defendant’s past record. Some Democrats opposed the bail reform bill. It would require voters to approve the measure via a Constitutional Amendment. See the Democrats who voted no on the bail reform measure here. They include David Bowen, who is running for Lieutenant Governor, and Milwaukee’s Evan Goyke Jonathan Brostoff.

Our review of court records shows that Norman had these pending cases, with the following bail amounts:

Case 2: Norman also has a pending case in Washington County that was filed on Aug. 13, 2021. He was charged with felony vehicle operator/flee/elude an officer; third-offense OWI; and felony second-degree recklessly endangering safety.

The court ordered a $3,000 signature bond. After that there were various hearings, such as an arraignment and a Feb. 2, 2022, hearing where it was indicated that more charges were anticipated.

On Feb. 10, 2022, Norman also received citations for failing to take a breathalyzer test on an ATV, and for operating an ATV while intoxicated.

He has a prior record of resisting and 2nd offense OWI (misdemeanors) from 2011 and for misdemeanor receiving stolen property in 2008. He was convicted of misdemeanor bail jumping in 2007.

The Sheriff Says the Victim Is ‘Lucky to Be Alive’

The DoorDash driver “is lucky to be alive this morning, and a thirty-two-year-old Barton man is in custody at the Washington County Jail after an incident occurred on Werner Drive in the Town of Barton on Wednesday night,” the Washington County Sheriff’s Department wrote in its initial news release.

Washington County Sheriff Martin Schulteis said, “We are thankful that the victim is physically okay, however, our thoughts go out to her as she processes this traumatic event that easily could have resulted in tragedy. This suspect’s recent pattern of behavior is extremely concerning and we are working diligently to uncover how this could have occurred and hold him accountable.”

“The Washington County Sheriff’s Office received a 911 call from the driver who reported that she was shot at as she attempted to deliver pizza to a customer,” the release said. “Sheriff’s Deputies responded and were able to take the man into custody without further incident.”

The investigation revealed that the suspect ordered pizza which was to be delivered by a door dash driver. The driver arrived at the house and approached the front door when a shotgun blast was fired through the door by the suspect. The driver immediately fled the area and called for help.

The suspect told investigators that he had ordered pizza and accidentally fired the shotgun upon the driver’s arrival. Washington County Sheriff’s detectives executed a search warrant on the house early Thursday morning and collected evidence. The case remains an active investigation but the suspect will face several felony charges including 1st-degree reckless endangering safety, felony bail jumping, and operating a firearm while intoxicated.