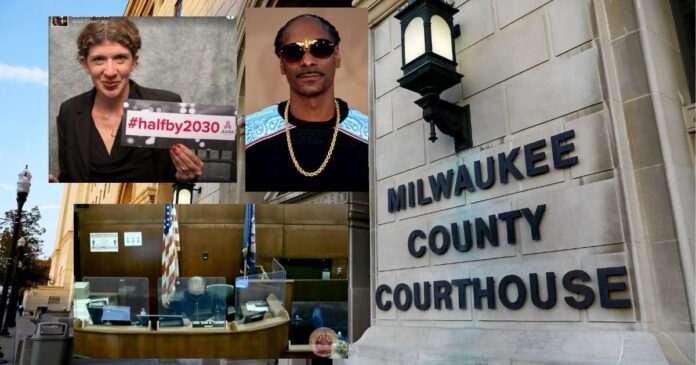 The conference attendees will be treated to a documentary film, executive produced by Snoop Dogg, about Attorney Kimberley Motley’s husband, Claude Motley’s struggles after he was injured during a shooting.

Milwaukee County’s judges and court commissioners are being urged by top court officials to attend a race and equity conference in which the key speaker is a woman who pushes defunding and abolishing police and prisons and advocates “redistribution of resources” to render enforcement “obsolete,” even in cases of violent and gun crime.

How radical is keynote speaker Danielle Sered? She doesn’t even support criminal justice approaches that involve social services AND police/prisons. She opposes the latter entirely, arguing that they are racist and increase violence.

Deputy Chief Judge Carl Ashley, who sent an email to all Milwaukee Judges and Court Commissioners, asked them to clear their court calendars for the day so they and/or attorneys can attend, writing, “We are committed and focused on long-term solutions to criminal behavior and public safety from a racial justice perspective.” We’re told that prosecutors and public defenders are usually among those who attend as well.

The judges and others will watch a documentary movie named “Claude is Shot.” It’s a documentary executive produced by Snoop Dog, which is about the shooting of Attorney Kimberley Motley’s husband, Claude Motley. Motley is currently involved in a high-profile Milwaukee County case involving former Wauwatosa police officer Joseph Mensah in which a perceived conflict of interest already exist.

The talk is funded through a grant that focuses on “reimagining and rebuilding local criminal justice systems — reducing jail incarceration and increasing equity for all.” Its goal is to reduce jail populations across the county by 50%. This comes at a time when the Milwaukee County Jail is in a staffing crisis, leaving police district stations to house arrestees, sometimes for days, and tying up police resources as a result.

This comes despite the court system facing lengthy backlogs, including in felony cases, that have repeatedly imperiled public safety as defendants are released on the street as violent crime cases dating to 2020 languish with repeated delays. It also comes at a time of skyrocketing violent crime and homicide, which is outpacing even last year’s record high. The event also features a panel with the former and current directors of the City of Milwaukee Office of Violence Prevention.

Previous Milwaukee County “Race, Equity and Procedural Justice Conferences” have featured such topics as “the shared history of racial division in America,” “the science of implicit bias,” a performance called “White Privilege,” and more.

“Our Race, Equity and Procedural Justice Conference is scheduled for Friday, April 8th at the Milwaukee Library’s Centennial Hall, 733 N. Eighth Street. At this time, we are planning on our conference being in-person in the morning and virtual in the afternoon. Please note that our featured presenter, Danielle Sered (author of ‘Until We Reckon’) will appear virtually in the morning session as well as a panel discussion after her presentation. This will be the seventh conference since 2014. See attached PowerPoint that outlines our previous programs. If COVID for whatever reason prevents any in-person programming, we will proceed virtually.”

“The planning committee is keenly aware of the backlog of cases and the rise in violence in our community, but we are committed and focused on long-term solutions to criminal behavior and public safety from a racial justice perspective. Although, I sent a notice, back in November to some of you, I should have sent an additional reminder sooner. If you have a calendar on April 8th, we would ask that you consider clearing same because it impacts others who would like to attend and participate in the conference, particularly attorneys.”

A 2019 article by the State Bar of Wisconsin called Ashley a “leader in evidence-based diversion programs in the justice system.” He’s a former public defender who became a Milwaukee County judge in 1999.

Who is Danielle Sered, the keynote speaker?

Danielle Sered is featured prominently in the report, “Solutions to Violence: Creating Safety Without Prisons or Policing.” Her group, Common Justice, argues that police and prisons don’t keep people safe. The group works to “foster racial equity without relying on incarceration.” Her group doesn’t even believe more police will help stop the surge in gun violence.

In October, her group wrote, “A system that incarcerates Black children for nothing is a system that will never keep us safe. We have to reimagine public safety without police and prisons, the future of our youth depends on it.”

Of incarceration, Danielle Sered tweeted, “I recognize that my standard for what entitles a society to put its own people in cages is higher than average.” Of police, she tweeted, “Enforcement-focused responses to violence presume incorrectly that people involved in crime will be deterred by threat.” Her group also pushes “supervised injection sites” for drug users.

She wrote recently, “Cooperating with the police should not be a prerequisite for access to basic medical, safety, and healing resources for survivors.” On Twitter, Sered referred to Kyle Rittenhouse as “dishonest, racist, excuse-ridden, victim-blaming.” She wrote, “Jacob Blake is beginning to heal through the trauma and violence he endured at the hands of police,” even though a District Attorney later cleared the officer.

In June, she wrote, “This past year we have seen a growing appetite for safety solutions that do not rely on police and prisons. As we see a painful increase in gun violence nationwide, it is critical we do not turn backward. We have to double down on the solutions that will keep people alive.”

On January 5, Danielle Sered tweeted that she wasn’t in favor even of the “social services PLUS incarceration approach to gun violence…it fails to account for the ways incarceration GENERATES violence. It’s like having a water PLUS lighter fluid approach to fire.”

“Danielle thinks some people who are concerned that defunding the police will lead to a
rise in violence fundamentally misunderstand what most policing does: a recent study
found that an average of 4 percent of police time was spent addressing violent crime,” read a report by her organization.

In Danielle’s view, “This vision of safety, to be fully realized, includes and requires the
redistribution of resources from the criminal penal methods to more productive, reliable
measures of producing safety: investments in health care, in education, in housing, in living wages, in violence interrupters and intergenerational interventions that draw on the moral authority of those most respected by their neighbors, in conflict resolution and restorative and transformative justice, and in a social service infrastructure and safety net that “in time will render enforcement not just less dominant, but obsolete.”

We asked Chief Judge Mary Triggiano and Judge Carl Ashley how the conference is funded. They said it was funded by a MacArthur Safety & Justice Challenge Grant. They estimated the cost would be “anywhere from $1,150-$2,500 including Sered, movie panelists, movie screening fee.” There is not public money involved. Sered is being paid between $500-$1,500.

We asked, “Who chose her and why?”

The answer: “The Race Equity and Procedural Justice Committee – a multi-stakeholder, criminal justice group- has put on conferences over the past 7 years touching on a variety of topics. The committee tries to have a variety of individuals present with differing viewpoints to spark dialogue. The conversation engendered has been broad, deep and, at times, contentious. Ms. Sered spoke at Turner Hall and a committee member suggested that she present.”

We asked, “She’s a big advocate of opposing incarceration even for violent crimes. Is that the right message to send judges and prosecutors in an era of historic crime highs? Why?”

They wrote: “As a survivor of violence, Ms. Sered is a proponent of restorative justice and that any response to violence should adhere to four core principles: our responses should be survivor-centered, accountability-based, safety-driven, and racially equitable. This is what peaked the committee’s interest in her. The conference also will feature the movie, ‘When Claude Got Shot’ about a shooting victim from an attempted carjacking in Milwaukee and his medical, financial and emotional struggles.”

We looked up “When Claude Got Shot.”

“Persisting through multiple surgeries, catastrophic health care bills, and the lingering emotional aftermath of that traumatic night, Claude finds himself torn between punishment for Nathan and the injustice of mass incarceration for Black men and boys. For Claude, the path to recovery ultimately leads to forgiveness. But that path proves to be a fraught one, paved with all the complexities that race, violence, justice, and healthcare can possibly present,” the filmmakers’ website explains.

Here is the full schedule for the event: