State of the State Marked by Failure Under Tony Evers 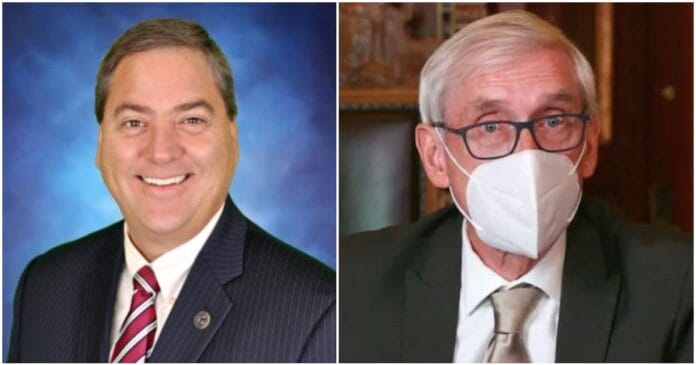 Each year, Wisconsin’s governor addresses state legislators and the public in the State of the State Address. Usually, this represents an opportunity for governors to tout their accomplishments and their vision for Wisconsin’s future.

In 2022, there is more at stake for Tony Evers with this address than ever before – but unfortunately for him, he has no accomplishments to tout.

As Wisconsin has dealt with two years of historic challenges, Tony Evers has been asleep at the wheel. He has refused to provide real leadership while leaving the work of governing to liberal staff and political operatives in his administration, and on every issue that matters, Evers has chosen to serve the interests of the far-left – not working-class Wisconsinites.

Yet Evers continues to ignore parents who are concerned about the quality of their children’s education – instead siding with his teachers union donors in backing divisive critical race theory ideology, while vetoing bipartisan literacy and curriculum transparency bills. After a year of failing to ensure that kids returned to the classroom, he even had the audacity to call local education decisions “messy” – if only they had benefitted from some leadership from their governor!

Evers’ anti-parent strategy is reminiscent of that which sunk Terry McAuliffe’s campaign for Virginia Governor. As parents across the country rise up and demand involvement and transparency in their children’s education, is Evers so tone-deaf that he can’t empathize with their concerns?

Meanwhile, crime is rising across Wisconsin, and Tony Evers has failed to provide real solutions to keep the public safe. In October, Evers designated federal dollars (i.e. his taxpayer-funded re-election slush fund) towards some vague “violence prevention” effort. He announced it at a press conference that was interrupted by gunfire! And yet as of January 2022, none of that money had actually been spent.

Instead, Evers has literally dodged questions and refused to take any real measures to ensure public safety – culminating in his refusal to hold Milwaukee County District Attorney John Chisholm accountable for his office’s role in allowing the Waukesha Christmas Parade attack suspect back on the streets for just $1,000 bail.

Tony Evers is also failing to help our economy return to normal. Wisconsinites won’t forget that one of Evers’ first initiatives as governor was to take down Governor Walker’s “Open for Business” signs, and he hasn’t looked back. His anti-business policies have been consistent throughout his tenure.

Small business owners and employees paid the price of Evers’ costly lockdowns that shuttered Main Street businesses for nearly two months. Now, after declaring over the summer that the outcry from small business owners didn’t constitute enough “proof” to act, Evers is standing idly by as national Democrats push vaccine mandates and other policies that are exacerbating labor shortages in Wisconsin and nationwide.

This comes after Evers failed to get unemployed Wisconsinites the benefits they were promised during the height of the pandemic – resulting in over 100,000 backlogged cases and thousands of cases stuck in the appeals process well into 2021.

And of course, in one of his most egregious offenses, Evers proposed a $1 billion tax hike while our economy was still recovering from the pandemic. Thankfully, it was blocked by Republicans in the State Legislature, yet he tried to claim Republicans’ tax cut as his own! Does he think that Wisconsinites aren’t paying attention?

The fact is that Evers has no record of accomplishments to run on. While he has made his campaign about opposing Republicans in the Legislature, he is running on their accomplishments. He has resurrected 2018 campaign pledges, like fixing Wisconsin’s roads, and yet is silent on major promises on which he has failed – like his “fair maps” that were ultimately blasted by members of his own party as “a perversion of justice,” a “con,” and “stealing minority representation rights.”

If Evers couldn’t deliver results during his first term, why should he deserve a second? And if he can’t even unite Democrats, how can he claim to be able to unite Wisconsin?

Wisconsinites deserve better than a governor who kowtows to Madison liberals and the far-left while failing to lead the rest of us. The Republican Party of Wisconsin is working hard to ensure that we defeat Tony Evers and elect a commonsense conservative for governor in November. We encourage all Wisconsinites concerned about the direction of our state to join us.

Paul Farrow is the volunteer chairman of the Republican Party of Wisconsin. He can be found on Twitter at @PaulFarrowWI.