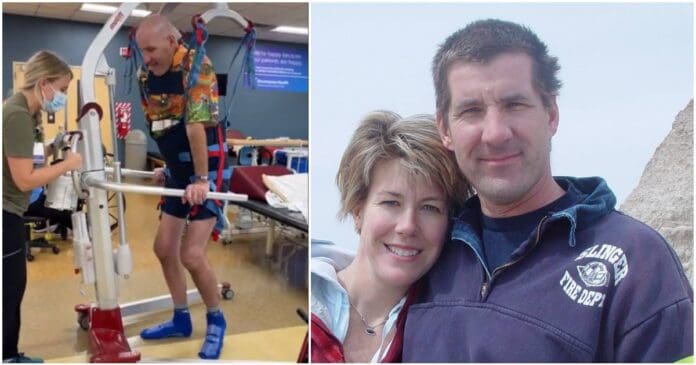 Steve Wenger is 55 and never had any kind of health problems until he got the COVID-19 vaccine. He loved hiking and pickleball, rode a Harley, and worked job sites.

“I was healthy as a horse prior to getting this. It literally hit me like a freight train. It came out of nowhere. I’ve never been dependent on anybody for anything. Now I was dependent on someone for everything,” he says.

Steve Wenger is a former Slinger, Wisconsin, firefighter, who received the Johnson & Johnson vaccine shot for COVID-19 on May 18, 2021, and, on May 25, he started having issues with walking.

But that was only the beginning. He ended up paralyzed from the neck down, on a ventilator, and completely dependent. He needed nurses to feed him, bathe him, and dress him. “For a month, I was helpless,” he said, calling it “horrific.”

In November 2021, he spoke publicly about vaccine side effects – and was still in a wheelchair. He said he tried to get the media to tell his story, but they wouldn’t.

He agreed to speak to Wisconsin Right Now about his journey.

“I had really heavy legs; I was having difficulty walking and going up a hill,” he told Wisconsin Right Now in an interview.

Wenger’s story is statistically rare, but he’s speaking out because he believes the media falsely paints vaccine side effects as a “conspiracy theory.” He’s living vaccine side effects. And it’s a horror story. Although his experience is not common, it’s real.

It got steadily worse.

“The next day, I was in a restaurant, got out of the booth and turned. I lost balance and almost fell on another table, and from there is just progressed,” he told Wisconsin Right Now.

He was able to walk shorter and shorter distances as it progressed. He fell several times, and his fatigue levels were “astronomically high.”

He went to the hospital when he fell on his face at a job site. He was walking across the driveway when his knees collapsed.

“I had been doing a lot of research on the symptoms,” he said. “Guillain-Barré Syndrome kept coming up.”

What is Guillain-Barré Syndrome? According to the CDC, it’s “a rare, autoimmune disorder in which a person’s own immune system damages the nerves, causing muscle weakness and sometimes paralysis. GBS can cause symptoms that last for a few weeks to several years.  Most people recover fully, but some have permanent nerve damage. Some people have died of GBS.”

It’s a recognized side effect of COVID-19 vaccines, but it’s a rare one. A research study published on Lancet says, “Guillain-Barré syndrome after vaccination against COVID-19 has been reported worldwide. Albeit rare, Guillain-Barré syndrome after vaccination is of great public concern given that it could potentially result in life-threatening paralysis.”

According to CDC, studies found a slight risk in increased GBS in people who got the swine flu vaccine in the 1970s.

In July 2021, after Steve Wenger got the vaccine, the FDA released a warning that there was an increased risk of GBS from the Johnson & Johnson COVID vaccine. “Based on an analysis of Vaccine Adverse Event Reporting (VAERS) data, there have been 100 preliminary reports of GBS following vaccination with the Janssen (Johnson & Johnson) vaccine after approximately 12.5 million doses administered. Of these reports, 95 of them were serious and required hospitalization. There was one reported death.”

Steve Wenger went to the hospital and was tested for all kinds of things, including MS. He was given treatments for GBS, and he was sent to rehab. He ended up going back-and-forth between the hospital and rehab.

“After that, I was for the most part stuck in the wheelchair. That was around the 23rd or 24th of June,” he says. “I went into the hospital on June 15, on the 25th I lost my ability to walk and became wheelchair bound.”

Exercises got harder until he couldn’t even do them.

Numbness spread back up his leg. “My legs were completely useless from the waist down. I was essentially paralyzed.”

“I started having numbness in my fingers, right in the tips of the fingers. It was getting into my hands and arms now.”

He was sent to the Mayo Clinic. If another person gave him three fingers, he couldn’t even squeeze them. He eventually became paralyzed from the neck down for almost a month. They gave him a chemo drug and said he had the worst form of GPS. The chemo drug eventually turned the corner for him in September. But at first, he struggled.

“I couldn’t even pick up the phone,” he said.  “Feeding myself has gotten to be a major ordeal. I wouldn’t wish it on anybody. It’s crazy. I’m dependent. The neurologists say the vaccine absolutely caused this; it activated it.”

He said his antibodies started attacking his own nervous system and eating away at the covering of the nerve.

“It can be caused by a flu shot, by a pneumonia shot,” he noted.

He said that some versions of GBS run their course in 30 days. But by day 81, he was still struggling, although he felt it was slowly starting to recede.

“When the vaccine kicked it off, the way it kicked off my immune system, it did something unique, different. It messed up my life.”

Typically, people have a full recovery from GBS. But a neurologist voiced concern that because it was going on for so long, he might not get everything back.

“Likely I will have residual side effects from this, whether that be a limp, inability to run, fatigue when I walk, hopefully, I’ll get to walk,” he said.

He’s 55 and never had any kind of health problems. “I was healthy as a horse prior to getting this. It literally hit me like a freight train. It came out of nowhere. I’ve never been dependent on anybody for anything. Now I was dependent on someone for everything.”

He worked as a project member in telecom, going to job sites to monitor work crews. He is from Wisconsin but moved to Phoenix a couple of years ago. He has asthma so his pulmonologist recommended he get the COVID vaccine. He said the air quality in Arizona due to wildfires was making it hard to breathe.

He was born in Madison and grew up in Grafton and lived in Slinger for 25 years. He was on the Slinger Fire Department for 15 years. He lives in Surprise, Arizona with his wife.

He believed more warnings of side effects should be given.

“They shoot you in the arm and away you go; there’s no disclosure that it might harm you, even if it might be rare,” he said.

He mentioned that U.S. Sen. Ron Johnson had a town hall with people who had “horrific reactions to these COVID vaccines. It can be life-altering.”

The media painted it like a “conspiracy theory.” But for Steve Wenger, it is incredibly real. He believes the government and media are “trying to ram this (vaccine) down everybody’s throats.”

He praised the nurses and the RNs for helping him. When he got out of the hospital, he had lost all of his muscle mass. He was sent to rehab. Eventually, he was sent home. It was the beginning of October. He works out at the gym five days a week to get his strength back. He’s built back his legs, and on Oct. 18, he was able to stand again, holding onto a wall at the gym. He was able to walk his first steps.

In January 2022, he got COVID-19 on top of all of it. He started blogging and writing about his story on Facebook.

“So glad I got the Corona vaccine! Not only did I get a 3-1/2 month stay in the hospital, I got to relearn how to eat, dress myself, walk, and everything else you do in an average day, now I got the F*CKING Corona virus,” he wrote in a January post.

But he’s getting stronger. By November, he was stable but still lacked enough strength in his feet to walk.

“I’ve worked up from there. I keep getting stronger….I spent a lot of nights where I was terrified.”