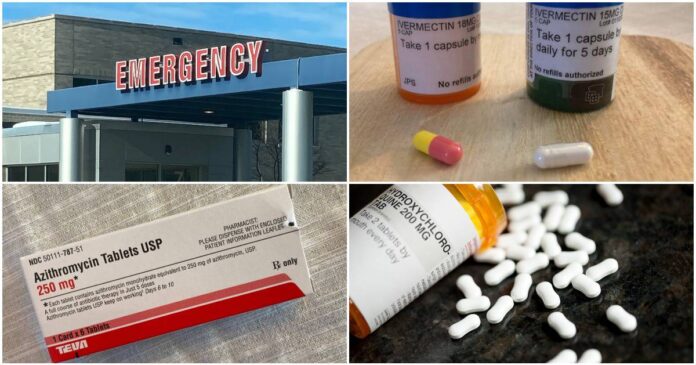 “We had to do this! It was life or death!” He took the first dose and started to feel better within a few hours.

As we look around the world and even right here in the United States of America, it is clear that there has been an overall effort to take away our freedoms under the guise of keeping us safe. When it comes to COVID, only the government-sanctioned experts know best—even though they’ve been wrong and flip-flopped many times the past two years. One could easily argue that more harm than good has been done by restricting our freedoms in order to “keep us safe.”

It is alarming when debate about what treatments work best is shut down and the government will decide what doctors and “science” you should trust and listen to. alternative COVID treatments including inexpensive repurposed drugs like Ivermectin and hydroxychloroquine that have been approved for human use by the FDA for decades have been suppressed and made difficult to obtain for the purposes of treating COVID.

And expensive treatments like Remdesivir are pushed as one of the only drugs used for the treatment for COVID. Yet in November 2020 the WHO came out with a study claiming Remdesivir should not be used to treat COVID patients in hospitals because it was ineffective.

According to an article from NBC News: “In light of the interim data from the WHO’s ‘Solidarity’ trial — which included data from more than 11,200 people in 30 countries — “remdesivir is now classified as a drug you should not use routinely in Covid-19 patients,” the president of the European Society of Intensive Care Medicine, Jozef Kesecioglu, said in an interview with Reuters.” Yet it’s the main drug still being pushed by the CDC and many hospitals in the US today. Why?

I suppose nothing has disturbed me more than hearing about the first-hand accounts of patients being refused alternative COVID treatments they request, even after being told by the hospital that nothing else can be done for them and they will likely die. On top of that, some of these hospitals have refused to release patients when they or their families request to be released in order to get a second opinion or alternative COVID treatments somewhere else. Second opinions have saved people’s lives at times and a patient has the right to get a second opinion or try another treatment in order to potentially save their lives.

There are stories right here in Wisconsin of families who have suffered because of hospital protocols. One such story comes from a woman who shared the heartbreaking story of her husband, who died last year at the age of 55 after being admitted into a Milwaukee area hospital. Out of respect for her family’s privacy she asked to remain anonymous. Her husband became sick in late September 2021 and tested positive for Covid shortly after.

After about a week of not getting better on his own she took her husband to the hospital. Shortly after being admitted his oxygen levels dropped and he was transferred to the ICU. She says she was unable to go into the hospital to be with him during this time and the communication between her and the hospital was poor. He was given 4 treatments of Remdesivir before his liver started being negatively affected. She requested they stop using Remdesivir and try other potential alternative COVID treatments such as ivermectin, hydroxychloroquine, and monoclonal antibodies but was told that wasn’t allowed because of hospital protocol (based on the CDC guidance).

She says once she became power of attorney she requested to have a meeting of care for her husband but the doctor refused. They continued with four more treatments of Remdesivir. A little more than a week after being admitted to the ICU he was put on a ventilator. His kidneys were failing, which is a potential side-effect of Remdesivir. Disagreements occurred among doctors about whether or not he should be transferred and he ended up being transferred to another hospital and sadly died the next day.

She believes (with good reason) that treating him with Remdesivir and the hospital not being willing to try alternative COVID treatments is what truly took his life. She hopes telling her husband‘s story will help raise awareness and help other people avoid similar tragedies.

Another woman I talked to named Debbie tells the story of her father who was diagnosed with Covid and Pneumonia last year December. He wasn’t doing well so he was admitted into a hospital in northeast Wisconsin where he was sent to the ICU and put on oxygen, plus they started treating him with Remdesivir.

But this family was desperate and decided to get a prescription for ivermectin along with a Z pack from a doctor in Michigan. They couldn’t get the prescription filled initially because the pharmacy they went to refused, so thankfully they found a pharmacy out of town that would fill it.

They ended up hiding the treatment for her dad with some of his belongings they sent into the hospital. When recalling what they did Debbie’s words were “We had to do this! It was life or death!” He took the first dose and started to feel better within a few hours. He took a second dose the next day and within 24 hours his oxygen levels were improving and he was ready to go home within days of taking the treatment and was home by Christmas.

The family strongly believes that had they not given him the treatment they snuck into the hospital he likely would have died. How sad that they had to hide what they were doing because the hospital refused to allow this type of treatment.

As I am writing this article, two men on ventilators—Daniel Pisano, 70, in Florida and Stephen Judge, 69, in Arizona—died within a day of each other, even as their families were still fighting with hospitals for the chance to try alternative treatments including Ivermectin.

There are many great healthcare facilities and doctors out there. But there are many other stories like this of families battling hospital protocol over their loved one’s lives.

We have to ask ourselves why isn’t there more of a willingness to try alternative COVID treatments, especially when other efforts have failed? Why are some hospitals ignoring the family‘s wishes and telling them “it’s protocol directed by the CDC” as if there’s no other choice?

Why is our government working with big tech to suppress the voices of doctors, scientists, and others who disagree with certain government protocols, even as those protocols fail at times?

According to an editorial in the Association of American Physicians and Surgeons, “The CARES Act provides incentives for hospitals to use treatments dictated solely by the federal government under the auspices of the NIH, providing hospitals with bonus incentive payments for all things related to COVID-19 (testing, diagnosing, admitting to hospital, use of remdesivir and ventilators, reporting COVID-19 deaths, and vaccinations) and (2) waivers of customary and long-standing patient rights by the Centers for Medicare and Medicaid Services (CMS).”

We have to ask ourselves why these incentives were put in place.

Thomas Jefferson once said, “Every government degenerates when trusted to the rulers of the people alone. The people themselves, therefore, are it’s only safe depositories.” We should not be putting such blind faith in what our government or big tech tells us is right. Our government has too much control over what we can watch and listen to, what we must inject into our bodies, and what type of treatments we are allowed to use even if our own doctors disagree with the government’s protocols.

I wonder how many lives could have been saved if alternative COVID treatments and information weren’t being suppressed. We must demand more transparency and accountability from our government, and we must fight for our liberties before it’s too late.