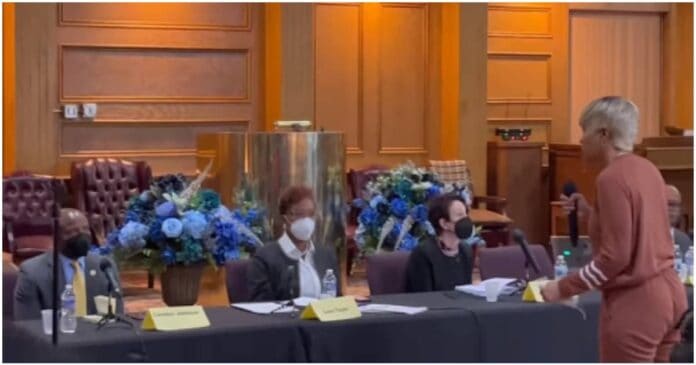 A Milwaukee woman named Desiree Brown eviscerated Acting Milwaukee Mayor Cavalier Johnson at a north side mayoral forum, saying he “didn’t show up” and reach out when her house was shot up. He was her alderman at the time.

Cavalier Johnson stayed silent throughout it all, and the woman was eventually stopped from speaking further during the question-and-answer period in the Feb. 4, 2022, Milwaukee mayoral debate at a north side church, El Bethel Church of God in Christ, 5401 W Good Hope Rd.

“Now it’s a time for a position of self-interest. I want to know why you didn’t reach out when you got a crime report to know that I got my house shot up,” she said to Johnson.

A man said, “Please cut the mic. We’re trying to get order so everyone can ask questions.”

The woman continued chastising Johnson. “I did my job. Cavalier Johnson didn’t show up,” she said.

“Because he’s the acting mayor,” someone said.

“No. My house got shot up July 25 2021. He was my alderman. He was my alderman,” Brown retorted. “Why didn’t you show up? Why don’t reach out? Why?” Before we started filming, she also accused him of “acting” in his campaign commercials.

Brown wasn’t the only person who excoriated Johnson at the event. A black pastor did so as well, challenging him to not become “lie-alier” on the issue of taxation of black churches, which is called “tax and take.”

You can watch that encounter here starting at about 11:32 in.

The pastor said to Cavalier Johnson: “You just said yes about tax and take; what are you doing? You have the power to change it today. Now you are my alderman also. You was elected in ’16, and I voted for you twice.. your name is Cavalier. I don’t want you to be Lie-alier Johnson.”

“Don’t lie to us in this church. What are you going to do about tax and take,” the pastor continued. “..Quit taking our churches…and putting us on the tax roll… you have the power to change that… tell us the truth. Do something about it.”

Cavalier Johnson responded, “I didn’t even know this was happening until it was brought to my attention” by multiple pastors. He said he went and met with them “and tried to put forward some solutions.” He said they are putting together a list of affected churches. “It was an administrative issue. Not an aldermanic issue.” He said his chief of staff is working with pastors right now.