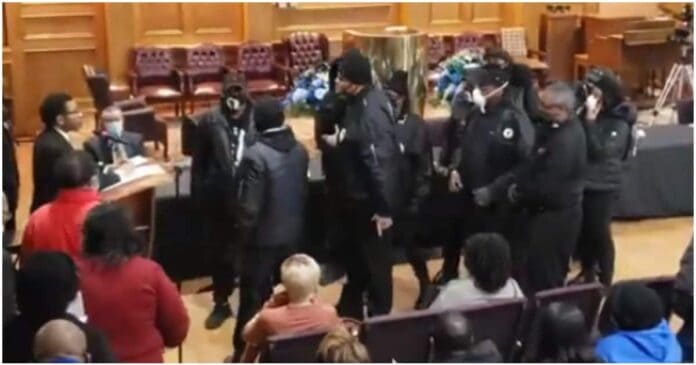 The Milwaukee Black Panthers briefly took over a Milwaukee mayoral debate on Feb. 3, leading to a raucous scene in which their leader, King Rick, yelled at Acting Mayor Cavalier Johnson.

King Rick and the other Panthers first stood in front of the bank of television cameras before storming to the front of the room and the table where the candidates sat.

They were then removed from the Good Hope church by police. Johnson told the crowd that he didn’t ask for the group to be removed; he said they showed up at another church to similarly confront him the other day, and he said they are suing him. Indeed, they are suing Johnson in federal court, claiming he barred them from a previous town hall.

We previously wrote about the Panthers’ confronting employees at an Asian nail salon. The leader in the mayoral forum video is “Darryl King Rick Farmer II,” whose Facebook page proclaims him as, “LEADER AND BLACK GENERAL OF THE ORIGINAL BLACK PANTHERS NATIONWIDE AND OTHER COUNTRIES!” Farmer was once involved in a failed effort to recall Mayor Tom Barrett.

Farmer told the Journal Sentinel previously that he was suing Johnson because the Black Panthers “wanted to bring a light to how Milwaukee continues to be the most racist and hyper-segregated cities in America. There is no economic development plan in place for the impoverished Black and brown communities.”