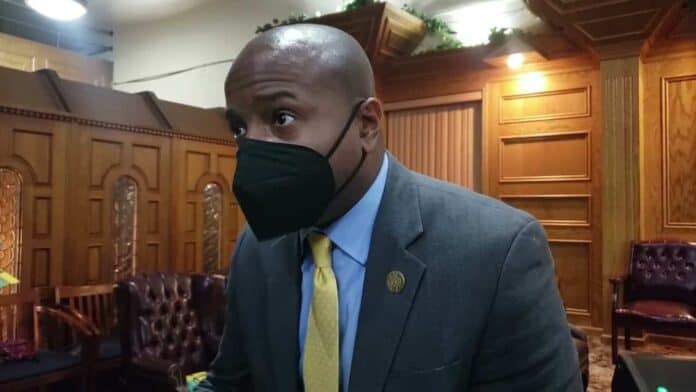 Acting Milwaukee Mayor Cavalier Johnson said on Thursday that he won’t “commit” to increasing the number of officers on the shrinking Milwaukee police force because the city needs to take care of other “challenges” instead, such as plowing snow, funding libraries, and picking up garbage. His comments are on video, which you can watch below.

Mayor Cavalier Johnson did say he supports “bail reform,” but he walked away to speak to someone else without clarifying what exactly he means by that.

He repeatedly said, during the interview with Wisconsin Right Now’s Jessica McBride and Jim Piwowarczyk at a northside mayoral forum on Feb. 3, 2022, that he would consider adding more officers only if the state gave Milwaukee more money. Asked why he advocates sending millions of dollars to the city’s Office of Violence Prevention instead of using existing resources to add more police, he said public safety needs to be “multi-pronged.”

We’ve previously reported that the size of the Milwaukee police force has decreased 18%  since 1995. The number of sworn officers is the lowest in at least 25 years. That’s occurring at a time of record homicide numbers, escalating recklessly driving, and skyrocketing auto thefts.

Although Mayor Cavalier Johnson has touted adding 200 officers to the force recently, he admitted in the interview that this was NOT an increase in the force size because of retirements and resignations.

McBride: “Do you support, will you commit to increasing the size of the police force in terms of the number of officers percentage-wise?”

Johnson: “If we get additional support from the state of Wisconsin to increase the police officers, I’d be interested in exploring that, yeah.”

McBride: “But you won’t say yes; you won’t commit to using existing resources to percentage-wise increase the number of officers.”

Johnson: “I’m not going to commit to doing that right now because we’ve got so many challenges facing the City of Milwaukee. We’ve got to make sure we keep our libraries for our kids, we have to make sure garbage gets collected, we have to make sure that during times like this that our snow get plowed. In order for us to increase the police presence by the number of officers on the force, we need additional support from the state. So I can’t commit to an additional amount of police if we don’t have additional support from the state.”

McBride: “Why not use the millions you want to give to the Office of Violence Prevention and use it to increase the number of officers in an era of historic homicide numbers?”

Johnson: “As I said before, public safety is multi-pronged. Police certainly play a role, I absolutely 100% believe that. That’s why I worked to make sure we funded over 200 police officer positions.”

McBride: “But that’s the status quo, that’s maintaining the size because of retirements and people leaving and all of that, that’s not increasing.”

Johnson: “I didn’t say that was increasing. I’m…trying to make sure we don’t make a reduction in staff for the police department. I’d be interested in doing that if we had additional funding. I can’t commit.”

McBride: “But you’re putting funding to the Office of Violence Prevention instead. What does that do for public safety or to reduce violent crime?”

Johnson: “As I said public safety is multi-pronged, it’s not just police  Police certainly play a role in that. I believe in that; that’s why I made those fundings. That’s why I additional dollars, federal dollars, into the traffic safety to go after reckless drivers. I’m supportive of the police effort to tow vehicles that are driving recklessly.. and do all of this stuff, but it’s got to be multi-pronged.”

McBride: “Are you for bail reform?”

Johnson: “Yes, yes I am. There needs to be reform. If individuals harm our community, then they should be held to account.”

McBride: “What would you change though specifically?”

Johnson walked away to talk to someone else without answering.