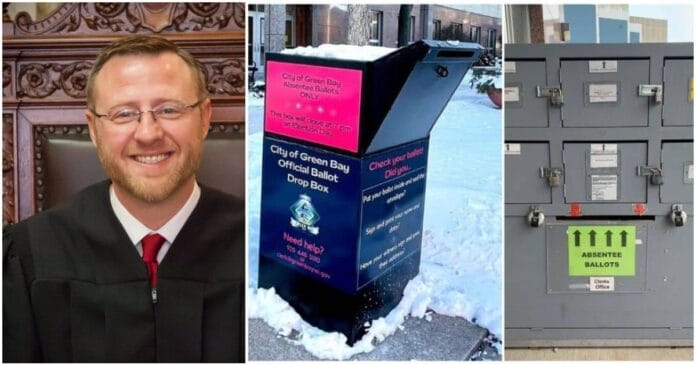 Justice Brian Hagedorn was the deciding vote in the four to three ruling. The other three conservative justices dissented, deciding the stay should have been lifted.

The Wisconsin Supreme Court ruled that absentee ballot drop boxes will be allowed for the spring primary election.

In a 4-3 ruling, the court ruled drop boxes must be allowed for the Feb. 15 primary in order to avoid confusion—as absentee ballots were already mailed out to voters, some with instructions indicating voters could use drop boxes.

The court also agreed to hear an expedited appeal of the case to rule on the legality of absentee ballot drop boxes for future elections in Wisconsin.

According to Wisconsin Public Radio, Hagedorn explained that it was too close to an election to change the rules for voting, saying, “Whether the circuit court’s decision to deny a stay constituted an erroneous exercise of discretion or not, further judicial relief would be inappropriate at this time.”

“As a general rule, this court should not muddy the waters during an ongoing election.”

Justice Rebecca Bradley dissented, using her opinion to reprimand Hagedorn. She said the state Supreme Court was wrong to let drop boxes be used in the February primary.

Bradley said, “Astonishingly, Justice Hagedorn says it doesn’t matter whether the circuit court properly denied a stay of its order or not; apparently, once again, it’s simply too close to the election to undo the court of appeals’ mistake,”

“In Wisconsin, there is always an impending election.”

On Jan. 10, Waukesha County Circuit Judge Michael Bohren sided with the Wisconsin Institute for Law and Liberty (WILL) and ruled that absentee ballot boxes would not be permitted in the primary.

On Jan. 24, the District 4 Court of Appeals suspended Bohren’s order.

Wisconsin state law says ballots can be returned in person or by mail only.