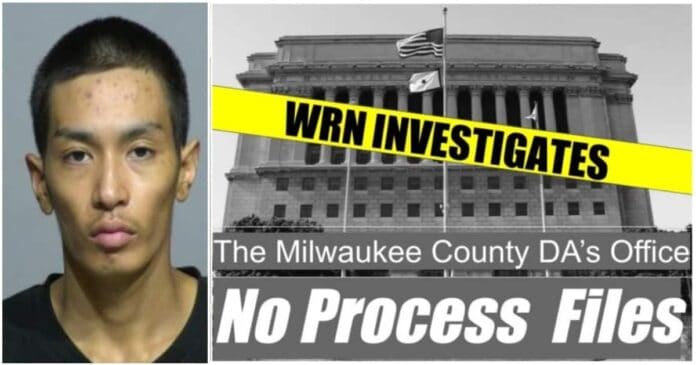 This is another chapter in Wisconsin Right Now’s investigative series – the “No Process Files” – exploring the Milwaukee County DA’s high percentage of non prosecuted cases. If you would like us to feature a case from that or another county, email [email protected] We keep all of our sources strictly confidential.

Jetrin Rodthong, the accused shooter of a Milwaukee Police Officer, was arrested on Sept. 23, 2021, with two other men by Wauwatosa police. Police reports obtained exclusively by Wisconsin Right Now show that the Milwaukee County District Attorney’s office refused to prosecute Rodthong and a second suspect after Tosa police say they found their car loaded with guns and drugs outside an auto parts store.

Employees of the store believed that Rodthong, armed with a gun, and one of the other suspects, were “casing” the auto parts store.

Rodthong was arrested by Wauwatosa police on the felony charges on Sept. 23, 2021, according to state Department of Justice records. However the charges – felony bail jumping, misdemeanor carrying a concealed weapon, and felony methamphetamine possession – were not prosecuted by the Milwaukee County District Attorney’s office in a decision that came down four days later, the records show. 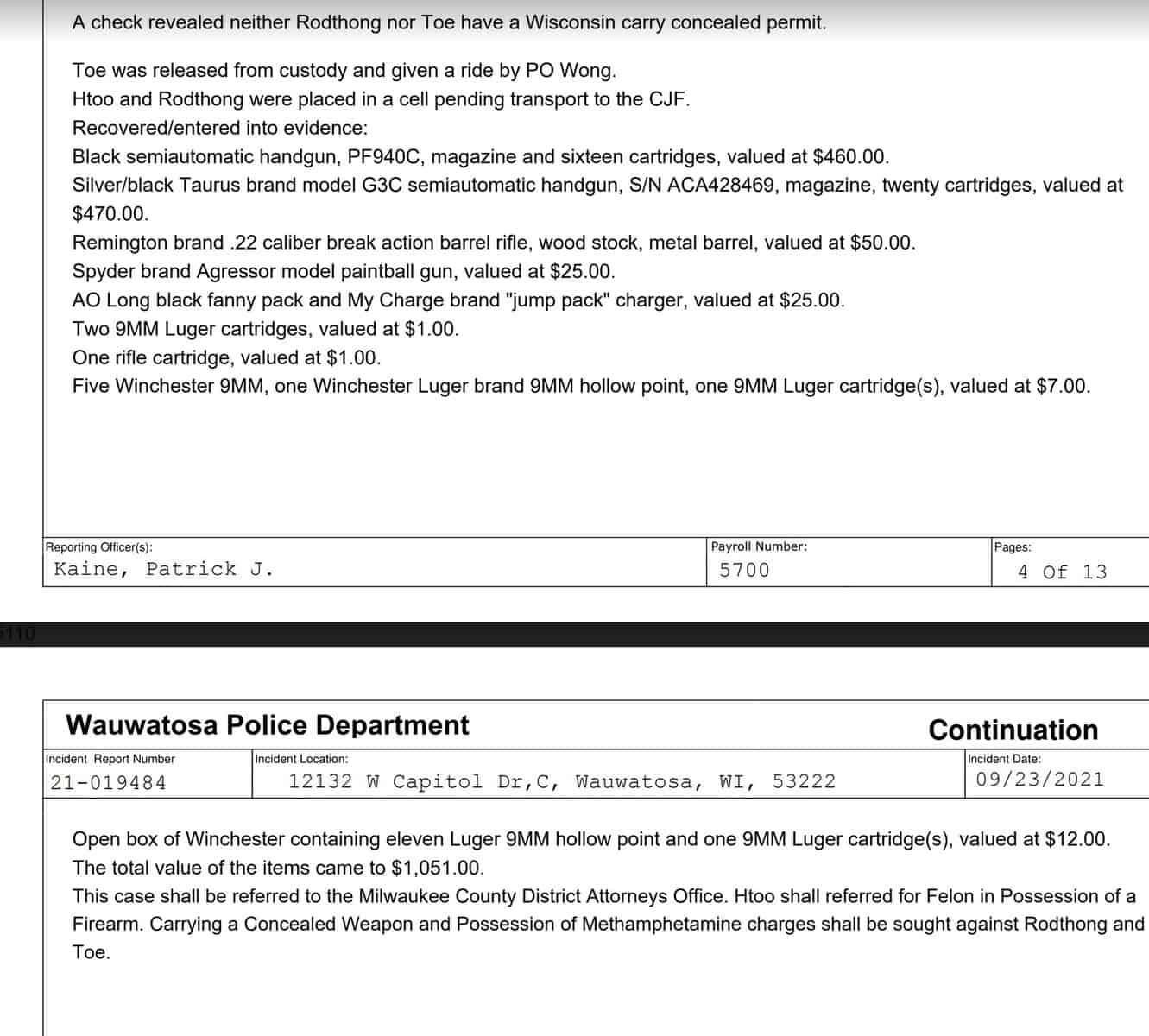 This is despite the fact that Rodthong had THREE other pending felony cases dating back to 2020 at the time of the Wauwatosa arrest. We will explore those felony cases in another story. Those cases are STILL pending and he was released on low bail amounts for them and was wanted on warrants.

This story is focusing on the non-prosecution in the September arrest because it’s a pattern; we previously reported that Milwaukee County District Attorney John Chisholm’s office has refused to prosecute about 60% of felony cases referred by local police, a growing number. Since we did that story, Chisholm has stopped posting his non-prosecution data online.

On Thursday, January 27, 2022, according to the Milwaukee police chief, an MPD officer responded to a report of a sick or injured person slumped in a vehicle at N. 21st St. and West St. Paul Ave. It was, numerous sources tell WRN, Jetrin Rodthong, who, the chief says, exchanged gunfire with the officer. Both were shot; the officer is expected to survive. Rodthong is then accused of stealing the officer’s squad and crashing it, before being taken into custody. It’s the third time in about two weeks that a Milwaukee area officer was shot multiple times but survived.

However, why was Jetrin Rodthong on the streets at all? Here’s what the Wauwatosa police reports say of the September arrest that was no processed by the DA’s office. We asked Deputy DA Kent Lovern, Chisholm’s spokesman, why the case was no processed and didn’t hear back.

ADA Thompson charged the third man, Poe Toe with one count of possession of methamphetamine and one count of carrying a concealed weapon.

However, Toe was never booked into the jail at all. Instead, court records show, he was given a “summons” and basically told to show up for his initial appearance. Chisholm told WRN in an interview last fall that his office has been issuing summonses for many non-violent crimes, a response to court and jail congestion and COVID-19. That means arrested people aren’t booked into the jail or given bail immediately upon arrest; they are simply told to show up for their first court appearance at a later date. Guess what happened when Toe’s initial appearance rolled around?

He didn’t show up. There is currently a warrant for his arrest.

We’ve obtained the incident report via an open records request to Wauwatosa police. It says:

On Thursday, Sept. 23, 2021, a police officer was sent to Advance Auto Parts for a suspicious circumstances complaint. Two employees explained that, the day before, a woman entered the store, walked to the back wall, and then exited. A short time later, a man entered the store and milled around a bit. A second male then entered, and they pretended to not know each other. The employee believed they were casing the store to rob them and added that she saw one of them had a pistol in his right front pants pocket.

They made small talk, explaining to the men that other employees were right outside and the parts driver should be back at any moment and said there was a Wauwatosa police squad parked in the lot. One of the men then made hasty selections and bought the items and left the store, the reports allege.

One of the suspects gave the employee a name. Police then ran the plate of the men’s Dodge Charger and realized it was registered to a convicted felon.

The officer remained parked in his marked squad in the parking lot of the auto store. Within 10 minutes, the Charger returned and a man entered the store. The officer called out to the man who exited the store and said he needed to talk to him about his visit to the store the day before and pat him down. The man (who was not Rodthong) consented and had no weapons.

At that point, the officer saw there were two people “sleeping” in the Charger. The front seat passenger was Jetrin Rodthong. The officer asked him to open the window, and he rolled it down a bit. The officer saw in plain view what he believed to be the grip of a handgun or small rifle by his knees.

He asked Rodthong to exit the car and patted him down for weapons but found none.

The rear passenger was patted down but had no weapons on him, but police saw a rifle in the rear portion of the car.

They were handcuffed but not arrested at this point. The officer decided to pat them down due to the alleged “casing” of the business the day before coupled with the employee’s statement that one of them had a partially concealed pistol.

The officer grabbed the gun and believed it to be a handgun.

All of the men denied ownership of the gun.

The officer inspected the gun in the passenger door and found that it was a 9mm cartridge in the chamber and 15 cartridges in the magazine that was inserted.

The officer removed the rifle and learned it was a Remington break action .22 caliber rifle.

They all denied ownership.

The officer believed the rifle fires pellets not live ammunition.

The officer looked through the vehicle and found a black fanny pack in the middle of it that had a handgun in it. All denied ownership. The handgun was a silver/black Taurus 9mm semiautomatic. There were 19 cartridges in it, including one in the chamber.

The employee identified one of the men and Rodthong as being in the store the day before and alleged that Rodthong was the one in the store with the handgun in his pocket.

Officers also found what they believed to be methamphetamine in the car, as well as a container of bullets in the glove box and two rounds in the center console.

One of the men gave consent to search the trunk. They found a rifle cartridge in the trunk.

The handgun from the front passenger door panel did not have a serial number.

The handgun from the fanny pack had a serial number.

Police confirmed that there was methamphetamine in the car.

They attempted to interview one of the men, but he refused. They interviewed a second man (not Rodthong) who admitted the gun and meth in the fanny pack belonged to him.

There was a paintball gun and a rifle capable of firing a .22.

A records check revealed that Rodthong had three open felony cases in Milwaukee county and did not have a Wisconsin carry concealed permit; nor did the other man in the car.

“This case shall be referred to the Milwaukee County District Attorneys Office. Htoo shall referred for Felon in Possession of a Firearm. Carrying a Concealed Weapon and Possession of Methamphetamine charges shall be sought against Rodthong and Toe,” the reports say.

Later in the report it says that Rodthong was arrested for allegedly carrying a concealed weapon, felony bail jumping and methamphetamine possession.

Rodthong told police he was currently homeless and living on the streets. He said he had been abusing heroin for a while but couldn’t remember for how long. He sometimes stayed with his sister, but she has a family and he did not want to bring problems around her.

He knew the two other arrested subjects from the neighborhood because they are all unemployed and living on the streets. Asked why he was at Advanced Auto Parts earlier in the day, he said he did not know why because he was sleeping. He said he was with the other two all night because they are in the streets.

He could not answer questions when asked specifics and continued to change his story which appeared to be deceptive, the reports allege. Once questioned on why he was at Advanced Auto Parts the previous day, he requested a lawyer and the interview ended.

The second man, Toe, claimed they were at the store to get paint. He said the fanny pack with the gun was his. He said he had it for protection and bought it off of someone in Milwaukee for $800. He admitted that the meth was his. He said the other guns and drugs in the vehicle were not his, including the rifle. He denied planning to rob the store.

An ATF trace on a Taurus G3C showed it was purchased in Brown Deer by a different man.