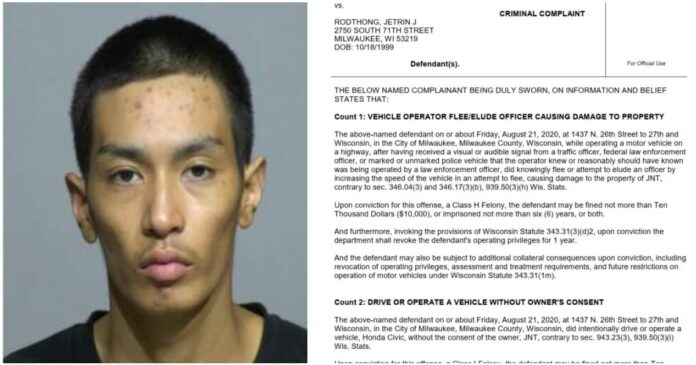 The criminal complaints into Jetrin Rodthong’s three open felony cases show that the man accused of shooting a Milwaukee police officer on January 27 has endangered officers before, allegedly leading them on dangerous chases in stolen cars, prompting one to take “evasive action to avoid being struck.”

Yet he continued to be released on low bail amounts by Milwaukee County court commissioners Rosa Barillas and Alexis Liggins: a signature bond, $300 cash bail, and then $3,000 cash bail, and the backlogged court system delayed resolution of his multiple cases (pending since 2020) due to “congestion” and COVID-19 policies. As a result, Rodthong, who was wanted on warrants at the time of his arrest, allegedly was on the streets to shoot the police officer, who had responded to a report of a man slumped in a vehicle. Rodthong is also accused of stealing the officer’s squad car before crashing it. He’s in custody, and the officer is recovering and expected to survive.

We obtained the criminal complaints in Rodthong’s three pending felony cases. We discovered:

The first criminal complaint, from a March 2020 incident, charges Rodthong with fleeing or eluding an officer, a felony. In the first complaint, Rodthong is accused of leading police on a dangerous pursuit for 4.5 miles in a stolen car before crashing into a curb, and was allegedly in possession of two MDMA pills when arrested.

In the second case, Rodthong was accused of driving a stolen car and giving police a false name when stopped. The complaint said they found 30 additional car keys, some shaved down, in the stolen car, along with a window punch, saw blades and other tools.

In the third case, also in August 2020, Rodthong was accused of fleeing officers in a stolen car in a dangerous scene in which an officer had to take evasive action to avoid being struck. He then allegedly led officers on a dangerous chase. When caught, they found heroin in his sock, the criminal complaint says.

“At approximately 10:10 p.m., two Milwaukee police officers were patrolling in a marked MPD squad car equipped with emergency red-and-blue lights and siren. The officers observed a gray automobile bearing no registration plates, eastbound in the 3000 block of W. Cherry Street. The gray car was traveling at a high rate of speed, and failed to stop (or even to slow) at the stop signs at Cherry and N. 30th Streets and again at N. 30th and W. Galena Streets. The officers activated their squad’s red-and-blue lights and siren in an attempt to stop the gray car to investigate the reckless driving. The gray car however sped up and fled westbound on Galena.”

“The fleeing car disregarded the red light at Galena and N. 35th Streets, and then turned south onto N. 40th Street. The fleeing car then headed east onto W. Vliet Street with the police car still in pursuit. The officers observed the fleeing car drive against oncoming traffic on Vliet, and then disregard another red light at Vliet and N. 20th Streets. The officers continued pursuing the gray car until it ultimately crashed against the curb at the intersection of N. 29th Street and W. Meinecke Avenue. The pursuit covered approximately 4.5 miles and lasted over four minutes.”

Continues the complaint: “The officers observed a male subject exit the gray car by the driver’s door. The officers ordered this person to the ground at gunpoint and arrested him. The driver was subsequently identified as the above-named defendant. The defendant was found to be in possession of two MDMA pills. Using the VIN on the gray car, the investigating officers learned that the vehicle had been reported stolen on March 11th, 2020 by its owner. The officers observed that the steering column was peeled. The front seat passenger stayed in the car after it crashed. This person was subsequently identified as BK (02/05/1983 d.o.b.). BK told the investigating officers that the defendant was driving the gray car, and saw the police at 30th and Vliet Streets. The defendant at this point said ‘Oh sh*t’ and started driving really fast and making quick turns. BK stated that he obviously knew the police were chasing them, and figured the car was stolen because the column was peeled, and because the defendant was fleeing from the police.”

The second complaint charges Rodthong with driving or operating a vehicle without owner’s consent, felony bail jumping and obstructing an officer for an August 2020 incident.

“Upon arrival the officers observed a blue Honda CR-V bearing WI registration plate #617-PBB stopped at the above location. The left rear window was broken out. A records check showed that the registered owner of this particular vehicle is MS (08/22/1953 d.o.b.). MS advised the investigating officers that he has been missing the vehicle since July 31st, 2020. MS further stated that he did not give anyone permission to take or drive his automobile. The officers approached and observed two occupants in the stolen car, a driver and a front seat passenger. The driver told the officers that his name was ‘Lumpoon Phetvisay.’ The front seat passenger was identified as SH (04/01/2002 d.o.b.). SH stated to the officers as follows: The driver is SH’s friend. The driver picked him up in the Honda CR-V, and drove SH from the north side to the south side.”

According to the complaint: “The driver was arrested. Officers observed the driver was wearing a single glove. From around the driver’s neck officers recovered a shaved-down car key on a lanyard. A search of the stolen car resulted in the recovery of over thirty additional car keys (some of which were likewise shaved down), a window punch, multi-tools, saw blades, and other tools. The investigating officers recognized this array of tools as consistent with tools used to break into and steal cars. At MPD District 2 station house, the driver was fingerprinted as part of the booking process. Fingerprint comparison showed that the above-named defendant is the person who identified himself as ‘Lumpoon Phetvisay,’ and who was found in the driver’s seat of the stolen car. I further base this complaint as to Count 2 upon a review of official Milwaukee County Circuit Court records in case #2020CF001226. Said court records show that on the above date the defendant Jetrin Rodthong was out of custody and subject to conditions of bond pursuant to Wis. Stat. Chapter 969, having been charged with Fleeing, a Class I felony offense contrary to Wis. Stat. § 346.04 (3). A condition of the defendant’s release on bond in any criminal proceeding is that he not commit any additional crimes.”

The third open case charged Rodthong with fleeing an officer, causing damage to property, drive a vehicle without owner’s consent, possession of narcotic drugs, and two counts of felony bail jumping, for another August 2020 incident.

The complaint continues to allege:

“Officer Humitz pursued the Civic which was having mechanical issues as it turned southbound on 27th Street at about 20 miles per hour. The Civic then went west on McKinley, north on 28th, east on Vliet and then south on 27th, where it disregarded a stop sign. The Civic began to accelerate and reached speeds of approximately 50 miles per hour. The Civic encountered traffic at Wisconsin and attempted to drive in the parking lane. The Civic then attempted to flee between two cars but ended up striking one of the cars, disabling and damaging the Civic at 27th and Wisconsin, in the City of Milwaukee, Milwaukee County, Wisconsin. The driver/defendant then exited the Civic and fled on foot. Officers Cabral and Kowalik were able to apprehend the defendant on foot about a block away.”