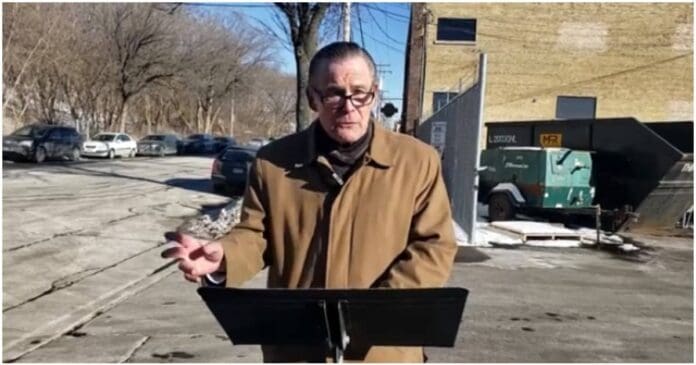 Milwaukee Mayoral candidate Bob Donovan, speaking at the site where a Milwaukee police officer was shot Thursday, called the “crisis this city is facing…unprecedented in our 175-year history,” and slammed Acting Mayor Cavalier Johnson’s “anti-violence” plan, differing sharply on the approach to restoring law-and-order in Milwaukee.

Donovan noted that Johnson proposed an additional $5 million for the Milwaukee Office of Violence Prevention. Donovan called that office a “questionable agency,” saying, “I can’t even tell you in all my years at City Hall what they’ve accomplished substantively to reduce violence.” Yet, Gov. Tony Evers has also proposed funneling $8 million to that office, said Donovan.

And, in sharp contrast to Johnson, Donovan called for more Milwaukee police officers on the streets and more detectives to solve crimes. Johnson has called for maintaining the current staffing level of the Milwaukee Police Department as violent crime and homicides escalate.

The problems, Donovan said, are not caused by police; they are caused by criminals and the “soft-on-crime” judges and District Attorney who aren’t holding them accountable. Reduced staffing levels at MPD are not helping, he said.

Donovan, who is 2nd and 3rd in two recent polls even though they were sponsored by Johnson’s campaign and a Democratic polling company, held the press conference on Jan. 28, 2022 at N. 21st and W. St. Paul Avenue. That was Donovan’s former aldermanic district, and it’s the site of Thursday evening’s shooting of a third Milwaukee law enforcement officer in two weeks. Wisconsin Right Now has reported that the accused gunman in Thursday’s shooting, Jetrin Rodthong, was out on bail in three open felony cases that were pending since 2020.

In the press conference, Donovan stressed, “Public safety is a crisis situation in the City of Milwaukee; in the last two weeks, we have seen three law enforcement professionals shot while protecting this community. That is unprecedented.”

He said he “can’t believe how much Milwaukee has deteriorated, from reckless driving to record-breaking homicides.” The city has seen historic homicide numbers two years in a row, and homicide numbers are way outpacing last year so far in January 2022.

“We lead the nation in stolen vehicles,” Donovan said. “And yet what do we hear from our elected leaders? Essentially nothing.”

Added Donovan: You can’t shoot a cop or an innocent person if you’re behind bars and in jail and that’s what needs to occur.”

Donovan called on the state Legislature to “move forward quickly on mandatory bail legislation” and to work closely with “our partners in the federal government.” He said the community needs to be told what the FBI, DEA and ATF are doing “in conjunction with our Police Department to get this crisis under control.”

He said that Milwaukee County District Attorney John Chisholm “needs to come forward and tell this community precisely what’s going on and why these individuals, one after another after another, have been let out on our streets to continue to terrorize this community.”

Donovan said he was pleased by his standing in the two polls which, although they are biased, still showed him in 2nd or 3rd place. The top two vote-getters in the February primary will move on to the April general election.

He said the Milwaukee Police Department has “reduced manpower…by hundreds. Those officers need to be restored first and foremost. This department needs an appropriate level of staffing to maintain order and stability in our neighborhoods. They can not keep up.”

He said people now have a “50-50 chance of getting away with murder” because the MPD is “50 detectives short and simply can’t investigate these crimes.”

He said the county has a “district attorney and judges who are soft-on-crime and don’t hold people accountable.”

Donovan said Chisholm needs to explain “why criminal after criminal is let loose on our streets. If he doesn’t do that, yes he needs to step down.”