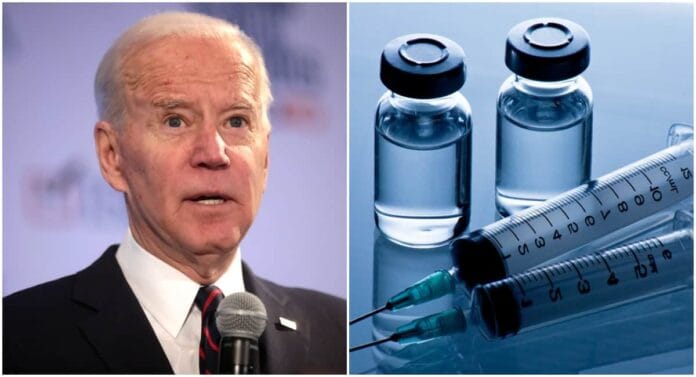 According to NBC, the Biden administration’s sweeping rule would have given “more than two-thirds of the country’s workforce” two months to make sure their employees were fully vaccinated or tested weekly.

The Supreme Court struck down that new regulation in a 6-3 vote.

However, in a 5-4 decision, the court left standing a mandate for medical facilities. Brett Kavanaugh and John Roberts joined the liberal justices in that decision.

“Requiring the vaccination of 84 million Americans, selected simply because they work for employers with more than 100 employees, certainly falls in the latter category,” the court wrote.

The nation’s highest court had agreed Wednesday to hear oral arguments Jan. 7 on the Biden administration’s separate executive branch mandates that most health care workers and those employed by private businesses with 100 workers or more be fully vaccinated against COVID-19, be tested regularly, or face losing their jobs.

Dozens of lawsuits were filed challenging the constitutionality of Biden’s vaccine mandates, which he put in place without Congressional approval.

The private sector mandate, which would impact more than 80 million workers in the U.S., initially was ordered halted by the 5th Circuit Court of Appeals in New Orleans, which cited “grave” constitutional concerns over potential executive branch overreach.

After more than a dozen lawsuits against the mandate on private businesses were consolidated and sent to the 6th Circuit in Cincinnati, the Ohio-based federal court reinstated it last week. The reinstatement ruling was immediately appealed to the Supreme Court by multiple plaintiffs across the country.

Biden also mandated that the employees of all health care companies that receive Medicaid and Medicare dollars be vaccinated against the coronavirus. This mandate affects more than 2 million American workers.

Conservative groups and free-market advocates argued the president doesn’t have the authority to unilaterally make health care decisions for individual American citizens. The Biden administration has said it’s confident it does have that authority.