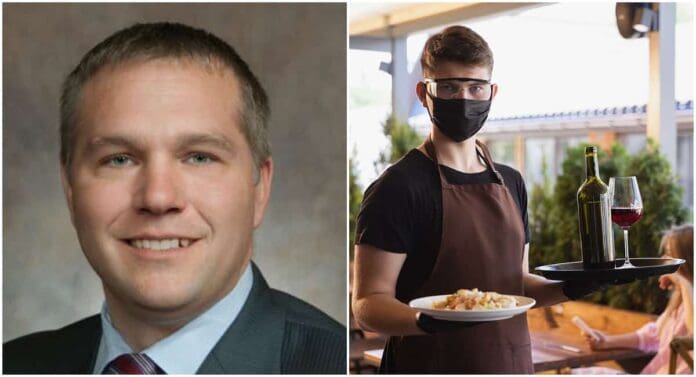 Adam Jarchow is turning the Attorney General’s race into a conservative dumpster fire, attacking a fellow Republican with a deranged website. But Jarchow once supported COVID restrictions on businesses in podcasts.

Republican Attorney General candidate Adam Jarchow once argued in a podcast that “places like bars and restaurants” should require people to wear gloves and masks during the early days of the COVID-19 pandemic. You can listen to the audio below.

We don’t know about you, but we’d prefer not to wear gloves to drink a beer in a corner tap.

Jarchow, who is running one of the most bizarre campaigns in state history, is basically a single-issue candidate, who is trashing Fond du Lac District Attorney Eric Toney, a Republican, who is also running for AG, over his COVID-19 prosecutions, which he later dismissed. Jarchow has simplified Toney’s record on COVID-19; for example, Toney did refuse to enforce Evers’ mask mandate and created a task force to get his county reopened.

WRN was the first to report Eric Toney’s COVID prosecutions; you can read that investigative piece here. We’ve covered all of the candidates thoroughly because we believe voters have a right to know where they really stand.

We understand why those prosecutions cause some people concern. However, we’ve discovered that Jarchow’s own positions are far from pure on COVID-19 restrictions. He even pushed, on audio, for Republican legislative leaders to reach a deal with Evers, urging the Democratic governor to get the GOP to “buy-in” to a compromise. It’s a far cry from his fire-breathing pronouncements since (sort of) running for AG. And it’s somewhat reminiscent of the last candidate to trash Toney in similar tone – Ryan Owens, who sounded a lot more pro-Evers in old podcasts than he did on the campaign trail.

At least Adam Jarchow’s podcasts didn’t disappear… as far as we know.

What Jarchow doesn’t explain: If the restrictions he pushed were not followed, how would HE have enforced them if the businesses refused? 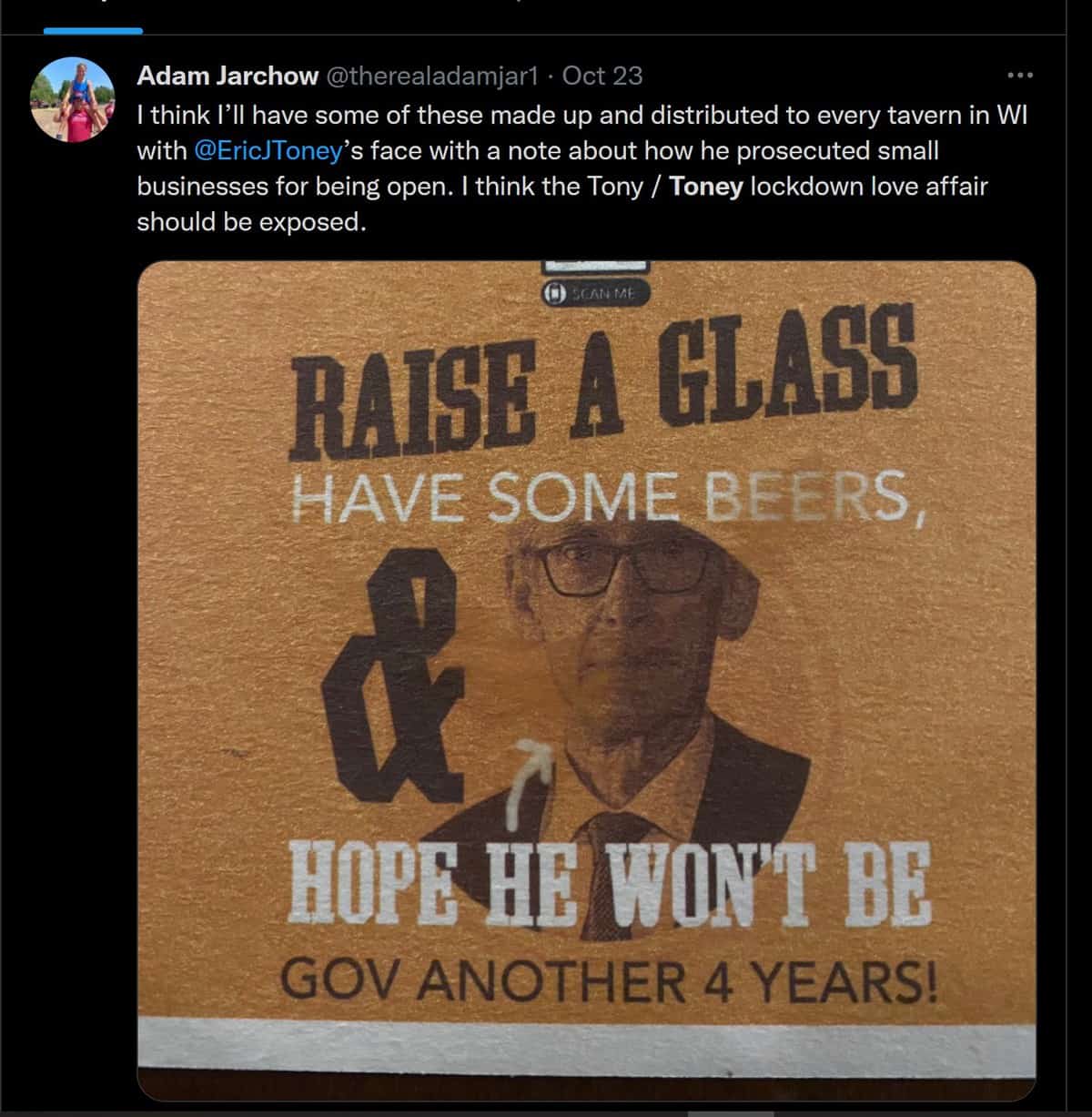 Jarchow’s past support of Professor Ryan Owens for AG also raises questions. In a podcast analyzing Evers’ Safer at Home actions, Ryan Owens criticized people “on the right” who are “saying the governor is a tyrant and all this,” calling it “that nonsense.” Owens said it’s regrettable that “we hear more from the loudmouth at the end of the bar than we do from anybody else over stuff like this,” yet Jarchow wrote him a big $1,000 check.

Jarchow announced after Owens quit the race that he was running to try to get someone else to run against Toney because of Toney’s COVID-19 record, but all he’s done since is bash Toney, even creating a juvenile website that turned Toney into an Evers’ marionette and running attack ads against his fellow Republican, whose significant prosecution experience gives him a real chance to defeat ideological Democrat Josh Kaul.

Jarchow was speaking a different tune on the DrydenWire podcast in April 2020. He pushed a regional “reopen plan” but thought there should still be “limited capacity” for bars and restaurants. He pitched a compromise between Evers and Republican legislators. He wanted more restrictions for small businesses in Milwaukee.

But now he calls Evers’ actions “illegal.” Why was he pushing for restrictions he considers illegal?

“The right place to be is to find that sort of sweet spot where we’re protecting people; we’re doing a regional reopen plan,” Jarchow said in the podcast.

“When we are reopened we’re limiting capacity to some extent, we’re requiring gloves and masks to be worn at, you know, places like bars and restaurants, and so we can balance this. We can do this, and we can do it right, and we can protect the elderly and the most vulnerable but we can’t just keep the economy closed.”

The host also asked Jarchow what advice he would give Evers on COVID. Jarchow, a former two-term legislator and business lawyer who has never handled a criminal case, argued for social distancing “rules” that include “rules for washing hands and touching face.”

“So, I would say no later than the end of this week there should be a plan in place that’s released to the public on a stage 3 opening,” Jarchow said.
Now he writes things like this:

He believed there should be even more rules in Milwaukee and that the Legislature should compromise with Evers.

“In Milwaukee I think you take a different approach, right, and it goes a little bit slower.  And we maybe have to have the restaurants have a little bit more buy-in. But if I’m Tony Evers, I put that plan together at the table with Robin Vos and Scott Fitzgerald, and I get the legislature to buy in because the worst part about all of this is having one person under what I think are very, very tenuous statutory authorities for him,” he said.

“I think he’s way out on a limb, and I suspect that if this continues the courts will get involved and show him just how far out on a limb he’s been. So, he should work with the legislature, get buy-in for a reopening plan, and I think once you have that and the legislature has worked with him then most people will buy-in, Republicans will start buying in more. But if he just keeps doing this the way he’s doing it all on his own you’re going to start seeing Republicans across the state continue to say ‘I’m not for this, I’m against this,’ and it makes it more and more partisan, and more and more difficult to implement.”

Now Jarchow is a lot more strident on COVID.