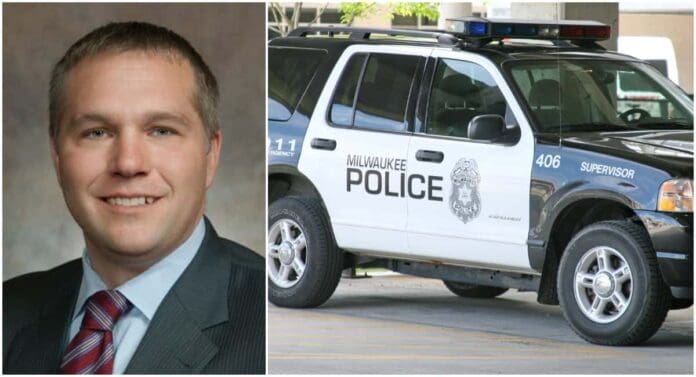 Just months ago, Adam Jarchow tossed Milwaukee and Madison cops under the bus suggesting they probably needed to be reformed.

Republican Attorney General Candidate Adam Jarchow believes police reform in Wisconsin’s bigger urban areas is probably necessary. He also admitted in a podcast that he doesn’t know much about “urban policing,” yet he wants to be the state’s top cop.

The Clear Lake business lawyer’s statements on policing have hardened now that he’s running for AG. But a candidate’s statements before they were courting voters can be most revealing. Republicans learned that lesson with Professor Ryan Owens, who positioned as a fire-breathing conservative in the primary but had a lot of squishy positions on Tony Evers, COVID, and Donald Trump on podcasts.

Now that Owens is out, Jarchow is gearing up to run in the Republican primary against Fond du Lac County DA Eric Toney. Sort of. He said he was running to find someone else to run against Toney, but now he’s got a campaign website, attack ads, and a juvenile website mocking Toney as a puppet. We decided voters have a right to know where he stands on the issues.

He’s writing things like this now, “Make no mistake, the violent crime spilling out in to formerly safe neighborhoods is 100% to blame on the ‘defund the police’ insanity of Josh Kaul and his liberal friends.” He’s right on that point. The problem is that his comments on police reform were a lot more nuanced before.

And not long after he was admitting he knows nothing about urban policing (hardly a selling point for an AG candidate), he was promising to fix Milwaukee, saying, “I love Milwaukee. It could be one of the greatest American cities. But we have to be serious about addressing crime & poverty. #MakeMilwaukeeGreatAgain.”

So what does Jarchow really believe on police reform in big urban areas like Milwaukee and Madison?

The host of the DrydenWire, a northwestern Wisconsin website and podcast, asked him, “Do you believe Wisconsin needs police reform?”

“Um, you know not really. I don’t know what that means as far as police reform. Look, I live a long way from Milwaukee and Madison and larger areas. If you would ask me, does the Polk County Sheriff’s Department need to be reformed or the St. Croix Sheriff’s Department or Amery Police Department. I would say no. They do a great job. If you’re going to reform them, give them more money. They are fighting this meth epidemic with one hand behind their back.”

But then he added, “But you know, are there things that happen in bigger urban areas that call for some reform? Probably. I just don’t know exactly what they are. I don’t know enough about what happens in urban policing to have an opinion on it.”

Jarchow’s statements are made about 31 minutes into this video from April 15th, 2021: