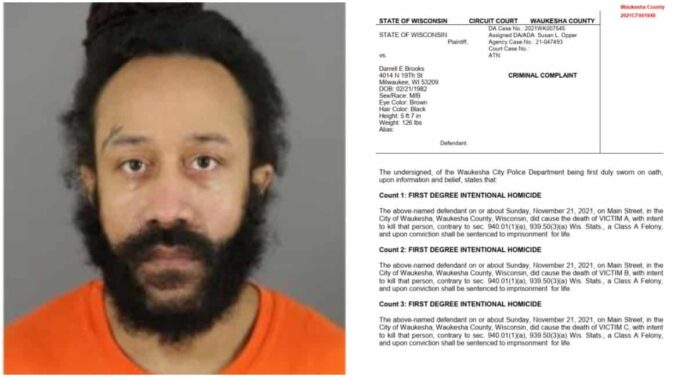 The Waukesha parade massacre suspect, Darrell Brooks Jr., was in court on Nov. 23, 2021, where he was charged with five counts of first-degree intentional homicide. A 6th victim has died, Jackson Brooks, 8, so he will be charged with a sixth count. At least 60 people were injured when Brooks plowed into the crowd at the Waukesha Christmas parade, authorities say.

Brooks is a registered sex offender in Nevada, she said, but he’s been non-compliant with that state’s sex offender registry since 2016, and there is an active warrant for his arrest there as a result. She said he was also arrested in May 2021 for battery, family violence – while out on $500 bail in the first pending Milwaukee felony case.

Darrell Brooks’ criminal record is extensive: He has two open felony cases in Milwaukee County from 2020 and 2021 and a lengthy string of criminal arrests across multiple counties and states. He also has a social media history with posts about BLM and against Scott Walker and other politicians. He also had anti-police rhetoric. This thread rounds up the posts, which are now deleted.