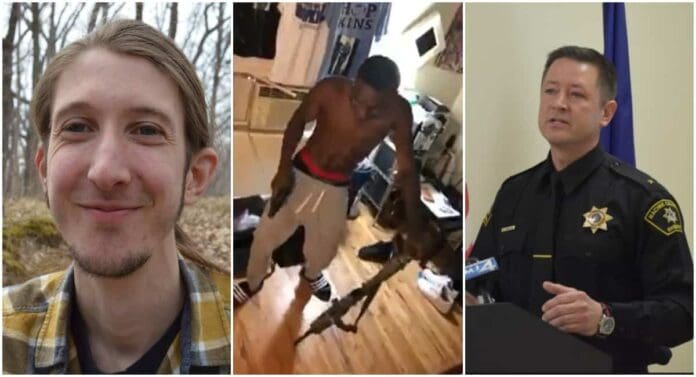 According to Sheriff Schmaling, Adrian “Jefferson is a dangerous criminal with access to high-powered weapons and a large amount of ammunition.” Yet he’s been released on low bail in three different counties, the latest with an elected official’s help.

Racine County Sheriff Christopher Schmaling is calling for the immediate removal of Racine County Board Supervisor Nick Demske for posting cash bail for a man the sheriff called a “dangerous criminal.”

According to the Racine County Sheriff press release,

On Wednesday, Nov. 24, 2021, Supervisor Demske posted $10,000 cash bail for Adrian O. Jefferson, which released him from the Racine County Jail.

According to Sheriff Schmaling, “Jefferson is a dangerous criminal with access to high-powered weapons and a large amount of ammunition.”

In response, Demske, who also works for the Racine Public Library, trashed the Sheriff, calling Schmaling’s release his “latest alarmist reactionary political stunt,” but he didn’t deny posting the bail. Instead, he solicited more donations for the bail fund and signed his statement “peace and unrest.”

Demske revealed that he posted the bail using money from the “Joshua Glover Justice Fund, in collaboration with the Milwaukee Freedom Fund.

The Sheriff noted in his release that Jefferson has pending felony cases in three counties; this is the THIRD time Jefferson has been released on bail despite allegedly committing new crimes. Before he landed in the Racine Jail on the recent offenses, he was released on only $750 bail in Waukesha County, set by Court Commissioner Linda Saafir for a still-pending felony theft and auto theft case (her low bail amounts in another case drew the ire of talk show host Mark Belling). He was released on $2,500 bail in a Milwaukee case that has been pending since 2018 by Judge Michael Hansher. And now Demske helps spring him again.

Schmaling’s press release on Demske comes after bail “reform” efforts in Wisconsin generated national outcry after it was revealed the Waukesha parade attack suspect, Darrell Brooks, was released on $1,000 and $500 bail for serious pending felonies in Milwaukee, freeing him to commit the attack.

When the Joshua Glover fund was announced, the Racine Journal Times reported that its money was managed by a non-profit called Wisconsin Alliance for Women’s Health.

That story, from April 2021, indicated the bail fund was organized by a group of “reform advocates and elected officials,” quoting a different Racine County supervisor, Eric Hopkins, who also works for the Kenosha Unified School District (he’s listed as a special education case manager.) It says that a panel reviews bail applicants. “Single donations can contribute to the freedom of multiple people over a long period of time,” Hopkins said in that story.

The Wisconsin Alliance for Women’s Health pushes liberal causes, such as abortion, in the state. Among other sources, the Alliance has received funding from a foundation run by the UW-Madison School of Medicine and Public Health that administers money generated by the conversion of Blue Cross/Blue Shield United of Wisconsin to a for-profit enterprise. In August 2021, the foundation gave the alliance $200,000 “to further its mission of empowering youth to be advocates for themselves and their peers, including in regards to their mental, social and physical health.”

The bail reform money that the Alliance controls specifically comes from “donated dollars,” the Racine Journal-Times reported when the fund was established; the story did not say who made those donations, however.

The group’s executive director has praised Gov. Tony Evers. “We are so proud to have Governor Evers standing strong with us, fighting for women’s access to abortion care at a time when we see governors across our nation slamming that door shut,” the group wrote in a 2019 press release. It did not list government grants in its most recent 2020 tax form here. However, the group did get government money via federal PPP dollars totaling more than $52,000 for payroll.

Theft of High-Powered Weapons and Ammunition

“On July 5, 2018, into the early morning hours of July 6, 2018, a Racine County Sheriff’s Office SWAT Operator was the victim of someone breaking into his locked vehicle, attempting to burglarize his home, and stealing some of his SWAT issued equipment. Some items stolen were:

• A Glock 27 .40 caliber pistol
• A Armalite AR-10 Rifle .308 caliber with a suppressor (Sniper Rifle)
• A Colt M16A1 .223 Caliber (Fully Automatic)
• 13 total magazines for the three firearms, some of which contained armor piercing ammunition

On July 8, 2018, the Sheriff’s Office was notified that the Milwaukee Police Department had taken Jefferson into custody for a carjacking and that Jefferson was armed with a pistol that had a piece of equipment attached to the pistol that had come from the stolen Colt M16A1, the release says. After Jefferson’s arrest, the Milwaukee Police Department located magazines consistent with the stolen AR10 magazines in Jefferson’s bedroom, Schmaling wrote.

A forensic examination of Jefferson’s phone provided GPS information showing that on the night of this theft, Jefferson traveled from Milwaukee via I94 and proceeded to the subdivision where the victim’s home was located, says the sheriff. At least five other homes in that subdivision had vehicles entered, some of which had their garage door openers stolen, but no other significant property loss was reported from the other homes.

On July 10, 2018, Jefferson stated to investigators that he was not involved in the thefts, but he alleged an acquaintance was trying to sell him the stolen firearms. Adrian Jefferson refused to tell the authorities where the dangerous weapons and ammunition were located, the sheriff says. These stolen items have still not been located.

The Sheriff’s Office continued its investigation and was able to review the videos, pictures, and other data on Jefferson’s phone… On July 15, 2021, Jefferson was arrested and was being held in the Racine County Jail on a $10,000 cash bond.

That’s when County Supervisor Nick Demske posted $10,000, so that Adrian Jefferson, who is extremely dangerous to the public, could be released. Jefferson is currently out of custody in the community despite his long and dangerous arrest record.”

In response, Nick Demske posted on his Facebook page:

On this day of thanks, I am grateful for unexpected opportunities disguised as hurdles and grateful that so many people are newly learning about the bail resources offered in Racine Milwaukee and entering into the larger conversation about the injustices of the cash bail system.

Many by now have seen the latest alarmist reactionary political stunt aimed in my direction by the Sheriff. Breaking news: the bail fund bailed someone out. The Joshua Glover Justice Fund is a community resource for people who can’t afford bail. The JGJF, in collaboration with the Milwaukee Freedom Fund, secured the amount set by a judge for release of an individual pre-trial.

If it were my bail, I would have been out the first day because I have access to financial resources. The cash bail system is a poverty tax, which is why Illinois and a number of other states and localities have reformed or abolished it. It’s is centered on wealth much more than culpability and it criminalizes poverty.

I’m sure I’ll be releasing a formal statement eventually with much more details, but in the meantime if you know anyone who could use bail assistance or you would like to contribute, go to bailoutracine.com. Thanks to those who have reached out in support. And thanks to those who have responded by providing generous donations to the fund. Have a meaningful holiday. Peace and unrest.

On September 6, 2019, Jefferson posted his bond and was released from custody. Jefferson is still awaiting a jury trial on Milwaukee County Case File 2018CF3275. Jefferson’s next court appearance is set for January 14, 2022, for a Status Conference.

It should be noted that, for reasons unknown to the Sheriff’s Office, no Bail Jumping charges were issued against Jefferson. The court set Jefferson’s bond at $750, which was posted that same day. Adrian Jefferson’s next court appearance is set for January 6, 2022, for a Jury Status hearing.

On February 12, 2021, an arrest warrant was issued for Adrian Jefferson in the amount of $10,000 in regards to the original July, 2018, theft of firearms that occurred in Racine County. On July 15, 2021, Jefferson made his initial appearance in Racine County Case File 2020CF646 where he was charged with the following crimes:

“The Racine, Wisconsin, based Joshua Glover Justice Fund was established in 2021 and exists to provide bail support primarily for those incarcerated at the Racine County Jail.

Mass incarceration is recognized by many today as the evolution of slavery, and the 13th Amendment of the US Constitution codifies it as such. The JGJF aims to continue the strong abolitionist legacy that the city of Racine and the state of Wisconsin as a whole both hold. As our ancestors were accomplices to Glover in regaining his freedom, we ask that you continue their legacy today by being an accomplice in regaining the freedom of the 2.2 million people in the US being enslaved in the system of mass incarceration today. And we ask that you start by doing it right here in Racine County.”

The Wisconsin Alliance for Women’s Health appears on its face to support women’s health issues. according to its vision statement:

“Every Wisconsin woman – at every age and every stage of life – is able to reach her optimal health, safety and economic security. We aim to achieve this vision by informing, involving and inspiring individuals to be effective advocates.  Because at the end of the day, policy should happen WITH us and not TO us!”

But what it champions includes abortion. A past press release trashed “white male legislators” for their stances on abortion.

A page on the website instructs, “How to be a white warrior.” 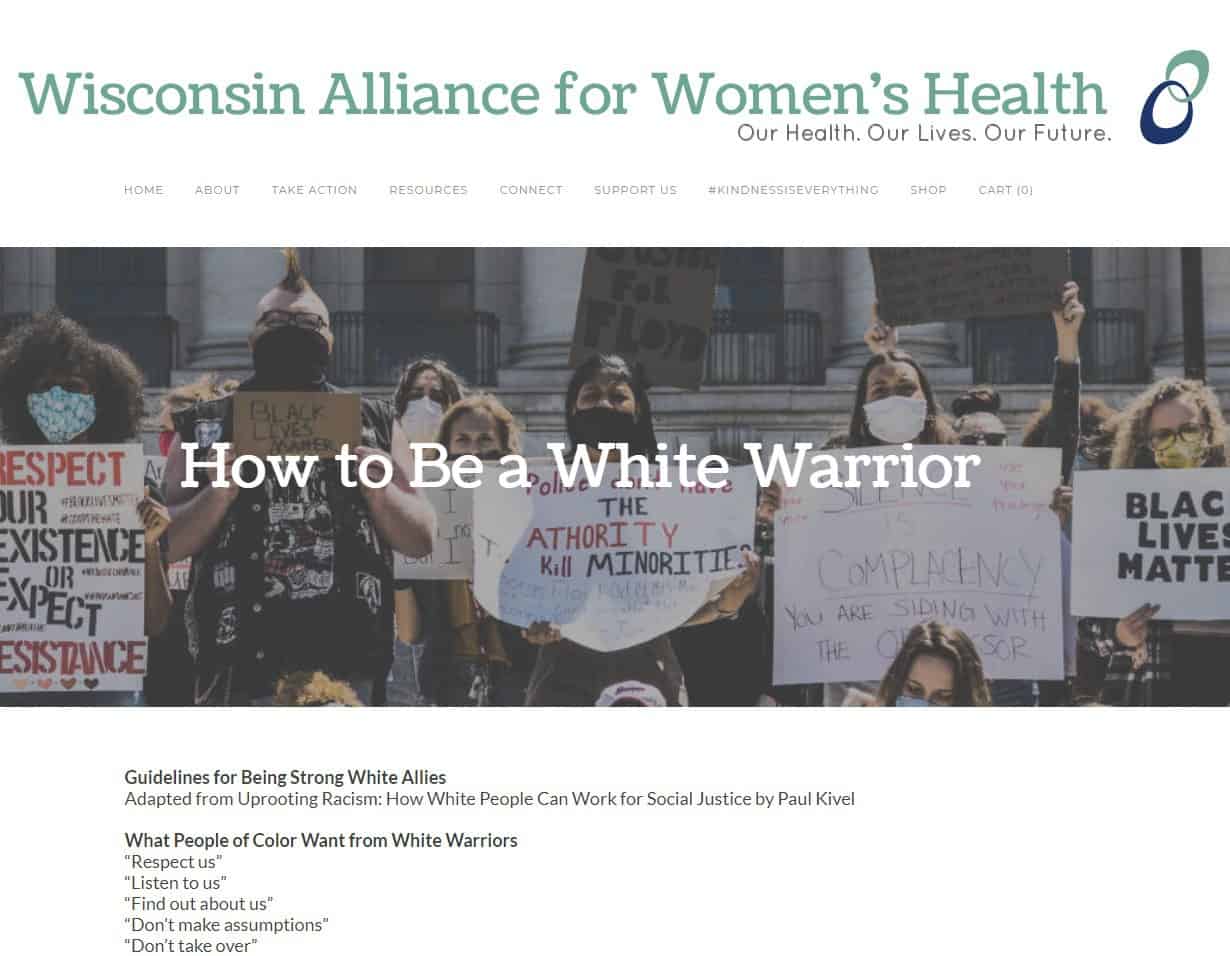