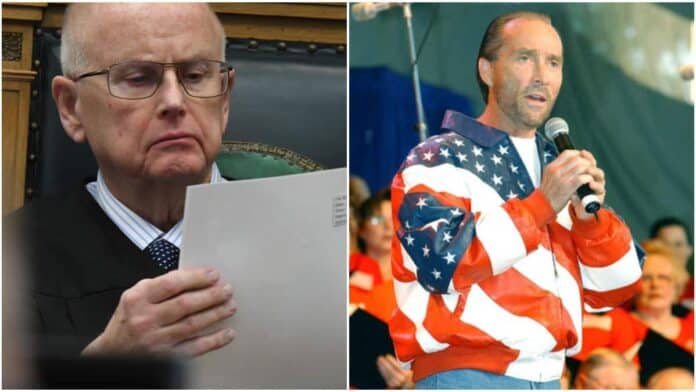 Wisconsin Right Now suggests: Everyone should make their ringtone “God Bless the USA” in support of Kenosha County Bruce Schroeder. Doing so expresses support for the rule of law. Post on social media when you do! Let’s make this go viral.

As the prosecution’s case against Kyle Rittenhouse spectacularly crumbles, some in the media and left are ridiculously trashing Kenosha County Judge Bruce Schroeder for… strictly adhering to the rule of law. The criticism of the judge has gotten so absurd that he’s actually being attacked for having a cell phone ringtone that plays Lee Greenwood’s iconic tune, “God Bless the USA.”

The judge’s ringtone, which briefly went off in court, made big national headlines in liberal sites that pretend they’re objective, like the Daily Beast and Raw Story. They tried to attach Donald Trump to the apolitical 75-year-old judge (who was appointed by a Democratic governor decades ago) because, non-sequitur here, Trump has used God Bless the USA in rallies!

Guess what? Lots of people like God Bless the USA. It’s a moving song that is about pride in America and freedom. Lee Greenwood wrote it in the 1980s after the Soviets shot down Korean Air Lines Flight 007. What’s really going on is that the judge is too old and too close to retirement to care what the New York Times, Daily Beast, and MSNBC pundits think of him. He’s not using this case as a stepping-stone to higher office. That drives them crazy because he’s impervious to public pressure and, thus, he’s kept the case focused on what happened that day in Kenosha, Wisconsin, the Constitution, and the rule of law.

The criticism is so absurd and Bruce Schroeder has done such a great job adhering to the rule of law (in pretrial hearings he sided both with the defense and prosecution in motions), that we suggest everyone in America change their ringtones to God Bless the USA in support of Schroeder but more so in support of what he stands for: The rule of law. The consistency in his rulings: A desire to cut out the extraneous to keep the jury focused on the defendant’s actions that night. He has expressed repeatedly that he wants a fair trial, not a political show, in either direction.

They also brought up Trump. The horrors! An MSNBC pundit called on the judge to be removed because of his rulings adhering to the law, and people have falsely called him a racist on Twitter. Vanity Fair snarled, “The Kyle Rittenhouse judge is the actual worst.”

How ridiculous is the public commentary from liberals against the judge? One guy on Twitter called the judge a “Nazi – P***y Grabbing – Cult loving – White Supremacist Dumbas* Judge.” Actually, at a previous hearing on Rittenhouse, the judge soundly rejected an attorney’s attempt to inject a racial argument into the case, telling her firmly that he doesn’t make decisions based on race.

This judge clearly loves America: The Constitution, the rule of law. So what? He lives in America. Why is that controversial? It’s entirely consistent with his ethical mandate as a circuit judge to adhere to the rule of law, to case law, and to the U.S. Constitution.

“Any veterans in the room?” he asked on Nov. 11, 2021, as court started. “It’s Veterans Day.” People, including the jurors, applauded the veterans who stood up. He did the same thing on the Marine Corps’ birthday. That’s surely to cause liberal heads to explode all over Twitter. But so what? He respects veterans. They fought and died to protect the freedoms we all have, including the rights afforded to all defendants in his courtroom, such as due process. It’s interesting how “criminal justice reform advocates” are so quick to dispense with those when it comes to Kyle Rittenhouse.

It’s not surprising that the judge’s adherence to the rule of law and love of America would be controversial, though. This situation – starting with Jacob Blake resisting arrest while wanted on a sexual assault warrant and continuing with the rioting and arson fires – has always been about disrespect for the rule of law.

The left, prosecution, and media have constantly tried to shoehorn falsehoods and elements into this case that have nothing to do with the legal questions in the case, namely, self-defense.

“This is not and won’t be a political trial,” Judge Bruce Schroeder said in court. He has a reputation as a tough, no-nonsense judge who keeps control of his courtroom, which is exactly what’s needed here.

He is the longest serving sitting judge in Wisconsin, a position he’s held with distinction and with minimal controversy for decades. He was appointed in 1983 by a Democratic Governor, Tony Earl. What he does believe in is keeping politics OUT of the trial. He’s said repeatedly in court that he is strictly following the rules of evidence.

“He has a reputation for doing what he believes is the right thing and being an independent thinker,” said William Lynch, a retired attorney who served on the board of the ACLU of Wisconsin, to CNN.

According to Ballotpedia, he was a District Attorney in the 1970s and then worked for years in private practice, so he’s practiced law on both sides of the legal equation. He’s been on the bench since 1983.

He has only had a few controversies in almost 40 years on the Wisconsin bench.

Some people are all aflutter that the judge, in the 1980s, ordered “a convicted child molester who also engaged in prostitution to get an AIDS test,” in the words of CNN. He expanded the orders to other sex workers, saying, according to a Chicago Tribune story from the time: ”I’m concerned about the man who patronizes a prostitute who has AIDS and then goes home and transmits the virus to his girlfriend, or to his wife, and there is a baby born who later dies of AIDS. What about the rights of that child?”

Also controversial, his ruling in the case of Mark Jensen, who was convicted years ago of poisoning his wife Julie with antifreeze; Jensen maintains she committed suicide. The judge allowed a “letter from the grave” by Julie Jensen and voicemails she left a police officer. The state Supreme Court and a federal appellate court much later said Jensen had a right to confront witnesses against him. Schroeder ruled that Jensen forfeited that right by killing Julie Jensen so she couldn’t testify against him. An appellate court agreed with him initially; Jensen is now being retried.

In the letter, Julie indicated, “I would never take my life because of my kids – they are everything to me!” and said, “If anything happens to me, he would be my first suspect. She wrote, “I pray I’m wrong + nothing happens … but I am suspicious of Mark’s suspicious behaviors + fear for my early demise.”

Which rulings have the left and media in such a tither? We recap them.

Schroeder strongly chastised prosecutor Thomas Binger for questioning, in front of the jury, Rittenhouse’s post-arrest silence, which is a right afforded by the Fifth Amendment of the U.S. Constitution.

“The problem is this is a grave constitutional violation for you to talk about the defendant’s silence,” Schroeder said. “You’re right on the borderline, and you may be over, but it better stop.” Got that? People are angry at Schroeder for adhering to the Constitution. He explained in court on Nov. 11, “I was talking yesterday about the Constitution and how the Supreme Court has interpreted it for 50 years.”

The judge chastised Binger for trying to sneak in references to a video that he ruled couldn’t come into court. Got that? People are angry at Schroeder because he expects lawyers to follow his judicial orders in court. Schroeder ruled the video was too dissimilar to the crimes (it allegedly shows Rittenhouse making a comment about shooting at shoplifters he saw at a CVS drug store, if he had his gun.) But this incident happened before the Kenosha shootings and had absolutely nothing to do with them. Furthermore, you can’t see Rittenhouse on camera; technically the judge withheld a ruling on it. “He (Rittenhouse) doesn’t do anything,” defense attorney Corey Chirafisi said in court. “He doesn’t open his window, he doesn’t honk the horn, he does nothing but passively sit and watch.” He also ruled out a video, before the shootings, that the prosecution claims showed Rittenhouse “striking a girl who was fighting with his sister in June 2020.”

In other words, Schroeder is trying to make sure the jury rules on Rittenhouse’s actions in Kenosha on the night in question, not clouding their judgment with past incidents that aren’t related.

He also, which the left leaves out, for the same reason, barred the defense from bringing up the criminal record of Joseph Rosenbaum (the defense wanted to tell jurors about Rosenbaum’s child molestation history.) Schroeder said no; he wants the jury to make its decision based on what Rittenhouse did THAT NIGHT. This was a victory for the prosecution.

In another ruling that favored the prosecution, Schroeder refused to dismiss the illegal firearm charge against Rittenhouse.

Schroeder said the men shot by Rittenhouse could not be called “victims.” However, this is a long-standing rule in his courtroom in every case, not just for this trial, that he deploys because the word “victims” presumes that the defendant is guilty, and he’s trying to make sure the trial is fair. Got that? People are angry at Schroeder for making sure the trial is fair. “The word ‘victim’ is a loaded, loaded word. And I think ‘alleged victim’ is a cousin to it,” Schroeder said at the time.

They’re equally upset that he, in contrast, allowed the shot men to be referred to as rioters, looters, or arsonists. However, and this is key: The lawyers were only allowed to do so if the men actually participated in those activities. Those terms describe behavior, whereas the word “victim” is a subjective label that applies judgment. If someone starts a dumpster on fire, they’re an arsonist, right?

The left is also trashing the judge for not allowing the jury to learn that Rittenhouse met some Proud Boys in a bar months after the shootings. The defense presented evidence that a thorough examination of Rittenhouse’s cell phone did not “establish that the user belonged to or even had any interest in any militia-style organizations.” Schroeder, who said in court that he had never heard of the Proud Boys before, said a meeting months after the shootings was not relevant. There’s no evidence Rittenhouse had any connection to the Proud Boys before the shootings whatsoever. In fact, the evidence in the trial has indicated no evidence of white supremacy, organized militia membership, or any of the other false narratives used by some in the media and left.

The judge also ruled that he wouldn’t order the defense to turn over a list of Kyle’s donors, when the defense said they didn’t possess it. He said prosecutors could subpoena the information if it was relevant.

Schroeder turned down Kenosha County Assistant District Attorney Thomas Binger’s request for an arrest warrant in the case early on, as well, because, he said, the DA was asking him to do something that’s against the law. Binger would have to show that Rittenhouse has committed a new serious crime and hadn’t, said the judge.

That’s the pattern. The judge upholds the rule of law. The left and media go crazy about it. Let God Bless the USA ring.