Kevin Nicholson: America is Worth Fighting For 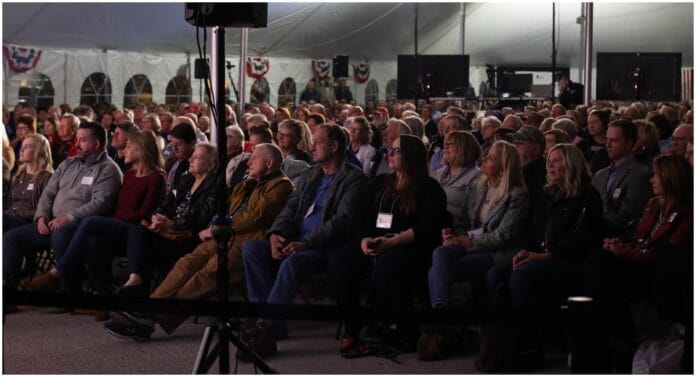 WEST ALLIS, Wis. – It was hard to miss the big white tent in the parking lot of the Hampton Inn-West Allis last week – especially as the voices of over one thousand people enthusiastically cheered on the speakers at No Better Friend Corp.’s (NBFC’s) first ‘Fight for America’ event.

The message was clear: Wisconsinites are fed up with how their purported leaders have managed our society – everything from Afghanistan to school curriculums.  The ‘Fight for America’ rallies and the No Better Friend Corp. ad campaign provide tactical methods to get involved – from supporting law enforcement, to fighting Critical Race Theory, to supporting pregnancy resource centers throughout Wisconsin.  The No Better Friend Corp. website features a variety of resources to help Wisconsinites figure out how to get involved in these issues and more.

Thursday’s ‘Fight for America’ speakers focused on everything from attacks on free speech through social media censorship, to the plague of wokeness in our schools, corporations, and governments. They emphasized the importance of the conservative grassroots right now, while arming and motivating the crowd to fight back and move beyond the mess we are facing as a state and nation.

Buck Sexton – a nationally syndicated talk show host who now occupies the “Rush Limbaugh spot” on daytime radio – started off the evening. It was his first time in Wisconsin, and he discussed the assault on freedom, the plague of wokeness and cancel culture on our society, and noted that, “Wokeness is the weaponization of political correctness.”

Sexton encouraged the crowd to reject the self-censorship invoked by wokeness, which he described as a tool that is meant to “Shut you up, and shut you down.”

Sexton noted that, “We have over 1,000 people in this tent outside of Milwaukee, Wisconsin.  You are not alone!  There are many people just like you.”  He emphasized, “It was the mobilization of the conservative grassroots that gave us this win in Virginia that is really stopping the bleeding of our freedom, in a sense.”

Sexton further highlighted the importance of the conservative grassroots fighting back right now as the established “GOP is sometimes weak on the culture war issue.”

Sexton urged: “They want to destroy your country as you know it.  Say no. Show resolve.  Stand up and fight. All of you. You want to win this fight? It’s actually pretty simple.  Defend the truth.  Support what is good. Fight what is bad … Love your country and your family and your God.  We fight for this nation win or lose because it is worth fighting for.  America while we can keep it – it is righteous to fight for it as it is.”

Vivek Ramaswamy, the son of Indian immigrants, a highly successful biotech entrepreneur, and an anti-woke author, explained the current culture of identity politics and woke cancel culture that exists within the walls of many corporations.  He also discussed the political indoctrination occurring within our schools.  Ramaswamy further discussed the three avenues through which to implement solutions to our nation’s challenges: first, through legal and policy resolutions; second, through private enterprise itself; and, last, through education.

Ramaswamy described “wokeism” as a new secular religion within our country that attempts to center Americans’ permanent, immutable identity on things such as race and gender, before all else.

Ramaswamy went on, “Our schools have been teaching our kids to be ashamed of our history, rather than to be proud of it. Faith in this country is on the decline.  Patriotism has nearly disappeared.  We have an entire generation – my generation – millennials and younger – who are hungry for a sense of purpose.  Hungry for a cause.  Hungry for a meaning.  Hungry for identity.  But the kinds of things that used to fill that void in our hearts – like faith and patriotism and hard work and family have nearly disappeared such that we have a God-sized hole in our heart and when something like God doesn’t fill that void, something else fills it instead. That is what makes wokeism the equivalent of our modern opium for the American soul.”

Ramaswamy closed by reminding our audience: “The American Dream: the idea no matter who you are or where your parents came from or what your skin color is, you can achieve anything you ever want in this country with your own hard work, your own commitment, and your own dedication – that is the American Dream.”

Closing out the evening was Wisconsin native, Ivory Hecker, who spoke about her experience working within corporate mainstream media and the current assault on free speech, social media censorship, and what ultimately drove her to stay true to her values and not allow herself to be compromised by corporate media.

“Free speech and censorship, historically, in America, were never even partisan issues,” Hecker said. “The new narrative is that too much free speech is a bad thing.”

She went on to note that, we have seen a dramatic culture shift in the past couple of years in our country that sacrifices individual liberty in favor of “safety,” as now certain words and actions aren’t considered “safe.”

Hecker implored our audience to, “Have the courage to take action.  Our country needs that badly right now. Your courage will have a ripple effect on others and one by one we can preserve liberty in this great nation of ours.”

‘Fight for America’ Rallies to Continue

Each of our speakers cogently described the challenges faced by our nation, but also the path forward to solving these challenges.  They armed our attendees with the tools to fight back against the forces that seek to undermine our society.  As Buck Sexton said, the American Left will face an “annihilation” if they continue their attack on common sense and reality.

I urge you to join us for No Better Friend Corp.’s second ‘Fight for America’ rally that is happening this Veterans Day, November 11th, in Neenah, Wisconsin.  Featured speakers for the second ‘Fight for America’ rally will include: NBFC Volunteer President & CEO Kevin Nicholson; Benghazi veteran Mark “Oz” Geist; special forces veteran Greg Stube; pro-American activist Scott Presler; and Wisconsin radio host, ‘Regular Joe’ Giganti. We hope you can join us, and look forward to seeing you soon!