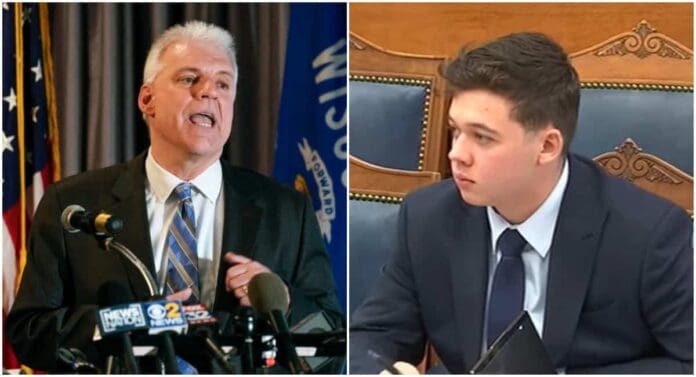 You’d think an elected district attorney would personally handle one of, if not THE, largest and most significant criminal cases in his county’s history. But, no, Kenosha County DA Mike Graveley has been completely MIA on the Kyle Rittenhouse case.

He pawned the case off to his unfortunate assistant district attorney, Thomas Binger, who was left to spin gold out of a pile of self-defense straw. It was clear from the start, and it’s still clear today, that the prosecution has NO COHERENT argument to counter the Rittenhouse defense team’s self-defense claims. None whatsoever.

We wrote Graveley and asked him why he didn’t prosecute the case himself. He didn’t respond.

We think the answer is clear: The case had loser written all over it from the start, so Graveley let his underling take the fall. The charges were NEVER justified by the facts of the investigation; they were a bone tossed to the mob that had just burned down parts of Kenosha, and the media, which had already constructed a false narrative of Rittenhouse as a white supremacist card-carrying militia member (there is no evidence of that). It was appeasement, not justice.

In fact, it’s not even clear what the prosecution’s theory is, other than to throw so much at the jury that maybe, just maybe, they will think, we better convict Rittenhouse of something. But that’s not the law.

Don’t give all the blame to the hapless Binger, who has been trotting out witness after witness who end up only making the case for the defense (two cases in point: Gaige Grosskreutz, who admitted pointing a gun at Rittenhouse and advancing toward him when he was shot, and Richie McGinniss, who testified that he saw Joseph Rosenbaum chasing Rittenhouse and then lunging for his gun when Rittenhouse shot him.)

No, don’t blame Binger for that. Binger is just the DA’s fall guy. He can’t change the facts. They are what they are. This is a weird case in which self-defense is being claimed in three sequential shootings, two of which resulted in deaths. But the facts were always clear. It WAS self-defense, and clearly so. Heck, it’s on VIDEO. You could have gone on YouTube months ago and figured out it was self-defense.

The blame belongs squarely with DA Mike Graveley. As the woeful prosecution case has unraveled day by day, witness by witness and video by video, into an embarrassing heap, it’s become clear: It should never have been charged in the first place.

That’s a decision that rested with DA Mike Graveley, the elected DA, Binger’s boss, and the guy who has been conspicuously absent from the whole thing. There are no press conferences on the steps. No media interviews. No appearances in court. It’s like a trap door opened and the DA fell down it.

Except he managed to go to Wisconsin Dells to get a “District Attorney of the Year” award on Thursday, as McGinniss’s testimony torpedoed the state’s case back at home.

Here’s the thing. DA Mike Graveley did an excellent job handling the investigation into Kenosha Police Officer Rusten Sheskey, whom he declined to charge for the shooting of Jacob Blake. His presentation explaining that decision was incredibly thorough, painstaking and presented well. And he did the right thing there against the forces of political pressure. Still, there are those who felt he should have charged Blake.

But on Rittenhouse he failed, and he needs to own it. Will the prosecution still eke out a conviction? Maybe on the illegal gun charge, but that’s just a misdemeanor (and he didn’t charge Gaige Grosskreutz for carrying a concealed weapon without a permit.) The only way the prosecution convicts Rittenhouse on more is if the jury ignores the facts, disregards the law, and rules on fear and emotion. That doesn’t excuse the fact that this prosecution was unconscionable.

Kenosha County Eye previously reported on the strange story that DA Mike Graveley was texting with Whitney Cabal, a BLM activist known as Billy Violent. The texts lasted almost six weeks, sometimes after 10 p.m., and involved the DOJ investigation into the Blake shooting and the Kenosha riots.

He is a Democrat who was a deputy DA before being elected DA in 2016. He was a long-time prosecutor who handled 200 jury trials, according to the Kenosha News.

Trials are searches for the truth, but it’s not justice to charge a person with homicide when the facts don’t fit. If DA Mike Graveley felt there needed to be a public airing of the facts, he could have held a public inquest (like Milwaukee County DA E. Michael McCann used to do years ago in every police shooting). Then, if the inquest jury didn’t recommend charges, he could have hung his hat on that when the protect class came calling for his head.

Have the political courage to do what is right. Every day, it becomes clearer what that was, and the buck stops with Graveley.