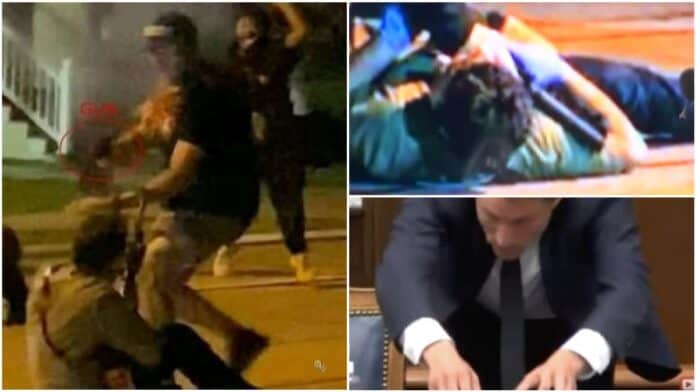 The Rittenhouse case has had a lot of dramatic moments. But these are the 7 bombshell moments for the defense in the Kyle Rittenhouse trial. They sank the state’s case.

That leaves the lone charge of possession of a dangerous weapon by a person under age 18. But that’s only a misdemeanor punishable by up to nine months in prison. It also leaves a “failure to comply with an emergency management order of state or local government” count (curfew), but that’s only a citation that carries no jail time (and it seems like selective prosecution besides.)

The entire prosecution case has been a train wreck in search of a theory. What’s the prosecution’s theory that it’s NOT self defense. They haven’t articulated it, and that’s a big problem. The case should never have been charged. The only wildcard is whether the jury will vote on fear or emotion, as opposed to the law and established fact.

Still, these 7 moments stood out.

1. Gaige Grosskreutz Admits Pointing His Gun at Rittenhouse as His Bicep ‘Vaporized’ 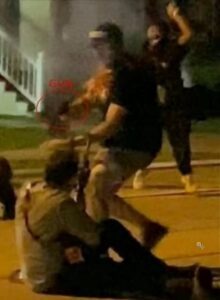 Grosskreutz, the only man to survive being shot by Rittenhouse, shredded the prosecution’s case when the defense got him to admit that he was pointing his loaded gun at Rittenhouse and advancing toward him when he was shot.

Especially since Rittenhouse had fallen and was sitting on the ground in the more vulnerable position, it’s hard to see how that’s not self-defense. The slimy Grosskreutz came across like a snake on the stand who wasn’t forthcoming to police about that weapon, and who was carrying it concealed without a permit, which is a violation of state law. But it was this moment in which Grosskreutz handed the defense its case.

Even more compelling, the defense showed the jury a photo of the moment Grosskreutz’s bicep “vaporized.” He was standing 3-5 feet away from Rittenhouse, and the gun is clearly in his hand.

Defense attorney: “You would agree your firearm is pointed at Mr. Rittenhouse correct?”

Defense: “Once your firearm is pointed at Mr. Rittenhouse, that’s when he fires his gun, yes?”

Defense: “Sir, look…Does this look like right now your arm is being shot?”

Grosskreutz: “That looks like my bicep being vaporized yes.”

Defense: “It’s being vaporized because you’re pointing a gun directly at him, yes?”

Defense: “When you’re standing 3-5 feet from him with your arms up in the air he never fired. Right?”

Defense: “It wasn’t until you pointed your gun at him, advanced on him with your gun, now your hands down, pointed at him, that he fired, right?”

2. Richie McGinniss Demonstrates in Court How Rosenbaum Was Lunging for Rittenhouse’s Gun

Richie McGinniss, a journalist, was the only eye witness close enough to see what happened in the second before Rittenhouse shot Joseph Rosenbaum.

There’s video in that first shooting death too, but it’s grainier and from a distance. So what McGinniss saw is key, if not everything.

And what he said torpedoed the state’s case.

McGinniss testified that Rosenbaum, who was chasing Rittenhouse “lunged” for Rittenhouse’s gun and “threw his momentum toward the weapon.”

“It was very clear to me that he (Rosenbaum) was reaching specifically for the weapon because that’s where his hands went,” McGinniss testified. He then stood up in the courtroom, putting both of his hands out, and demonstrated the lunge. He said Rosenbaum was in an “athletic position” as if he was “running as fast as he could.” The rifle was aimed lower than Rosenbaum’s hands, which were also going lower. Rittenhouse “dodged around it,” and then leveled the weapon and fired, he testified.

The prosecutor tried to get McGinniss to say maybe Rosenbaum was falling from being shot instead of lunging, but he just repeated that he thought Rosenbaum was lunging and trying to get the gun. 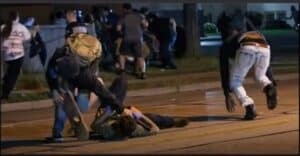 Good old Gaige Grosskreutz. For all of his subtle sniping at the defense, and refusal to admit obvious points (his twisted semantics on whether he was chasing Rittenhouse), he handed the defense its self-defense argument in the Anthony Huber death.

That’s because Grosskreutz admitted that even he feared for RITTENHOUSE’S safety because Huber was 1) hitting Rittenhouse with a skateboard and 2) “wrestling” for Rittenhouse’s gun.

If even Grosskreutz feared for Rittenhouse’s safety at the hands of Huber, why shouldn’t Rittenhouse have reasonably feared for his own safety? And that’s the test for self-defense.

4. A Photo Shows Huber Got His Hand on Rittenhouse’s Gun 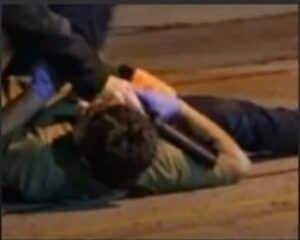 In opening statements, the defense presented a screenshot that proved Huber got a hand on Rittenhouse’s gun. That’s a big deal because the defense is arguing he was trying to disarm him.

Video also shows Huber attacking Rittenhouse and hitting him with a skateboard, but this photo, zoomed in, was very damning.

The Huber case seems the most clear-cut for self defense of them all. And that’s saying a lot. 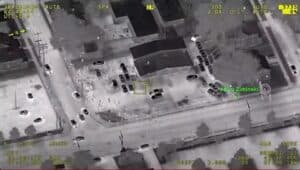 There are two videos that, while grainy and from a distance, clearly establish that Rosenbaum was chasing Rittenhouse, not the other way around, when Rittenhouse fired. 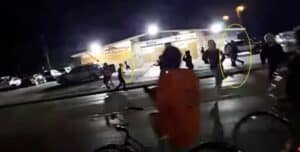 One was taken by a citizen, and one was an infrared video taken by an FBI spy plane. This is key because it harms the prosecution’s ability to argue that Rittenhouse provoked the attack, which would give him an extra hurdle to prove self defense (he’d have to show he exhausted all avenues for escape.) Instead, he was being chased down and then, according to McGinniss, cornered in a “dead end.” 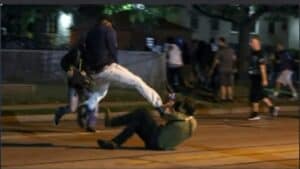 Remember Rittenhouse is charged with endangering jump kick man’s safety. Photographic evidence shows it’s the other way around. Jump kick man went first, too. The star witnesses have been video and the photos/screenshots that show Rittenhouse under attack from a mob.

7. A Belligerent Rosenbaum made a Threat to Kill 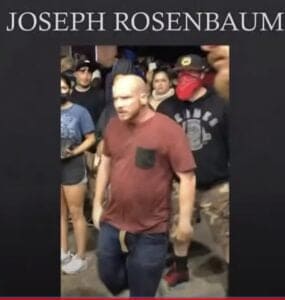 Witness Ryan Balch, a combat veteran hanging around Rittenhouse that night, testified that an agitated Rosenbaum threatened to kill him and Rittenhouse before he chased down Rittenhouse.

For good measure, the video showing Rosenbaum using the N word and telling someone to shoot him hurt the prosecution case too by showing it was Rosenbaum who was belligerent and agitated that night, not Rittenhouse.