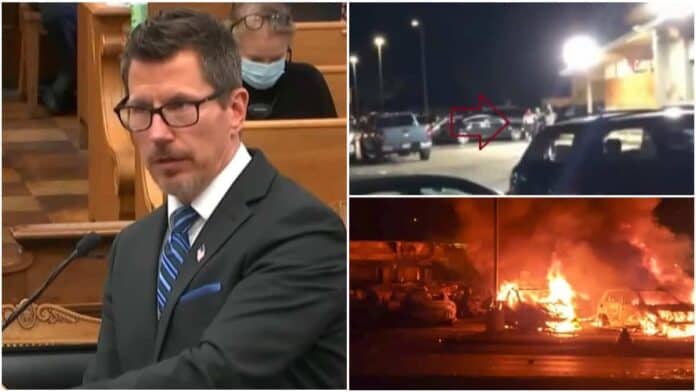 Kenosha prosecutor Thomas Binger continued his bizarre approach on Wednesday in the Kyle Rittenhouse trial, playing video after video that showed Rittenhouse being chased and attacked before opening fire. Binger only served to prove anew how lawless and dangerous the riots were in Kenosha the night that Rittenhouse shot three people.

Indeed, Assistant District Attorney Binger helped make the case for self defense, which continues a pattern that’s been present throughout the trial. The Kenosha County DA’s office decision to charge Rittenhouse, 18, with homicide does not align with the facts. That the charges don’t fit Rittenhouse’s actions (especially the first-degree intentional homicide count) was clear from the start to anyone who had watched the videos that were already public. The trial is only reinforcing it. It’s almost painful listening to Binger present testimony that builds the case for acquittal. But it is revealing.

In fact, a key prosecution witness, a Kenosha police detective, turned into a net gain for the defense. Indeed, Rittenhouse yelled, “friendly, friendly, friendly,” at approximately the start of Rosenbaum chasing him, the detective revealed for the first time under cross examination.

Inundating the jury with riot videos Wednesday was also an interesting choice. The scenes were not in any way shape or form a “peaceful protest.” They don’t paint the shot men in a good light. Binger has to deal with the facts. He’s lacking strong facts to contest self defense. That much has become clear, although, of course, you never know for sure what a jury will do, especially in a high-profile case.

The video is the star of this trial, more important than the testimony. Roving independent videographers told the tale, outside the filter of mainstream media, and there’s enough video to make the Rittenhouse trial feel like an immersion experience or a movie. It’s like having 10 different versions of the Zapruder film, hours long each.

But it doesn’t help the prosecution. Meanwhile, the defense raised a series of questions about how thoroughly police and the DA’s office investigated the matter.

“Get his as*,” a woman shouted at Rittenhouse in one video.

“Ain’t nobody coming to help,” a woman says in another moment, a telling comment about the failure of officials, from Gov. Tony Evers and AG Josh Kaul on down to local liberal politicians, to protect the city from rioters, creating an environment where armed men felt they were the only line of defense for small businesses and residents. “They don’t give a f*** about nobody out here,” says a woman, of officials at another point. 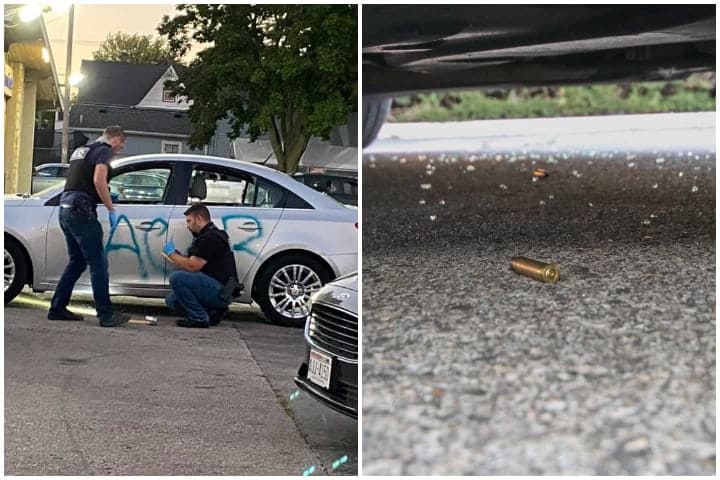 The Kenosha detective, Martin Howard, testified that Wisconsin Right Now’s Jim Piwowarczyk found two shell casings in the case and alerted police so they could confiscate them. “Because of the chaos,” all of the evidence was not collected the night of shootings, defense attorney Mark Richards said. “It wasn’t the standard thorough investigation.”

The detective admitted it wasn’t routine to not find all of the shell casings immediately. Richards also revealed that the FBI wasn’t able to get into Rittenhouse’s phone, but his lawyers offered them the code to get into it anyway. He also revealed that authorities had a search warrant to look into Gaige Grosskreutz’s phone, but his phone was never taken, and the search warrant wasn’t executed. The detective revealed that concerns over Marsy’s Law, a victim’s rights amendment, stopped police from searching Grosskreutz’s phone. Authorities also didn’t tape an interview with Grosskreutz. Grosskreutz is the man shot in the arm by Rittenhouse; Grosskreutz, a member of the People’s Revolution, was moving toward him with a gun in hand at the time, and he’s well-known to other police agencies due to a past prowling accusation.

Howard admitted that no one in authority went to the initial Car Source arson fire to put it out because police were not responding to property damage at that time. Rittenhouse was guarding another Car Source outlet after the first one was torched, so this helped explain to the jury why armed men felt they needed to go to Kenosha to do what authorities would not: Protect businesses.

Richards said one live streamer was arrested and had marijuana on his person, but police decided not to go forward on that matter. “We wanted the video more than to cite him for curfew or marijuana,” Howard explained. Kenosha Eye is reporting that Howard’s co-detective on the case, Benjamin Antaramian, is the nephew of Kenosha’s Mayor John Antaramian, who has been criticized for officials’ weak response to the rioting.

Richards also asked Howard a series of questions about whether it’s dangerous for a person to be disarmed of a weapon (which is the defense theory on behalf of Rittenhouse). “Correct,” he said.

Making the case for self defense

Prosecutors continued to demonstrate, through videos and live streamer testimony that Joseph Rosenbaum was an agitated and unsavory character and Rittenhouse was trying to protect a business. Howard acknowledged that Rosenbaum was armed with a chain at one point during cross examination and was starting a fire. (We broke that story here.)

Rittenhouse said in one video played by Binger that he didn’t have “non-lethal” rounds, and was prepared to protect businesses. He then called for medical and said someone had been pepper sprayed. That may be enough to help get him convicted of the misdemeanor illegal weapons charge perhaps, since he’s 17, but it doesn’t get you to homicide.

The evidence largely came from videos with witnesses, a live streamer, a cop, simply being asked to narrate or point out things in the videos.

“People are getting injured and our job is to protect this business,” Rittenhouse said in another video played by the prosecutor. He said he had a rifle to protect himself, and that he was there to help people as a medic. “We’re running medical, and we’re going in and getting people,” Rittenhouse said. He said he wanted to “provide medical attention” to injured people. “That’s about it.” He said rioters started a fire and deescalated a situation at a church, saying that he thought that EMS was unwilling to come in, and things would be more dangerous if the police tried to engage the rioters. He said that, as a result, citizens needed to help each other.

That shows Rittenhouse wasn’t there to cause trouble. He wasn’t with the people lighting fires and who painted F the police on government buildings and who were destroying small businesses – all scenes shown Wednesday to the jury by the prosecutor as well.

New videos were played that just buttressed what we already knew: Rosenbaum was chasing down Rittenhouse when he was shot. They included the FBI infrared video that was briefly discussed on Tuesday. But it just shows Rosenbaum chasing Rittenhouse at the critical moment too. The prosecutor claimed in opening statements that the video showed Rittenhouse running after Rosenbaum first, but it’s hard to tell from the video he played on Wednesday; it’s possible Rittenhouse was just moving down the street in the direction of Rosenbaum, who was near several cars, but wasn’t targeting or chasing Rosenbaum. 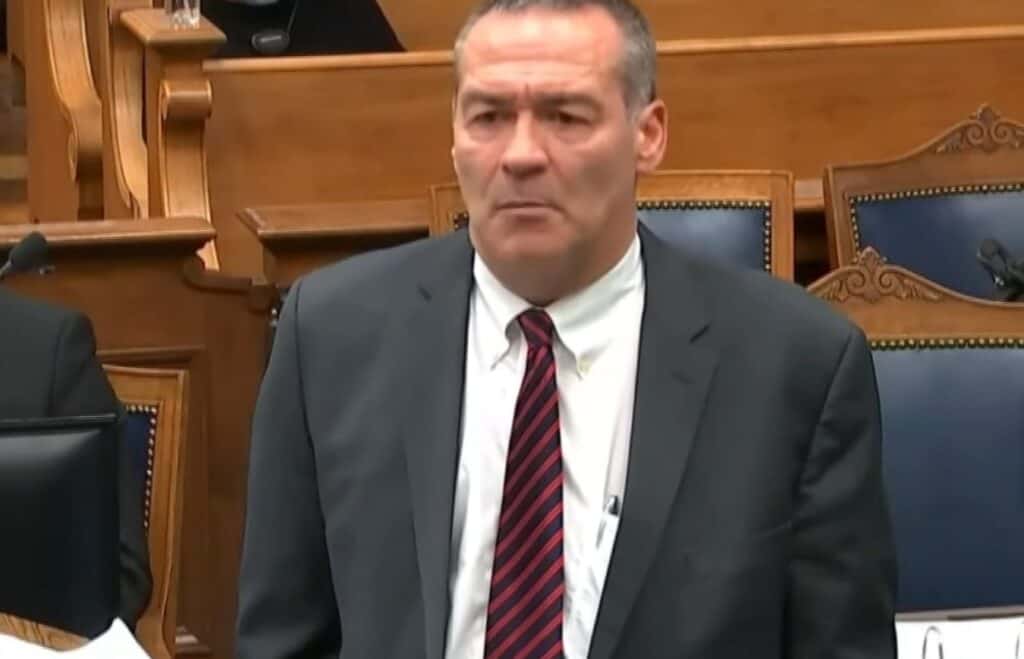 The video of Rosenbaum lying dying on the ground is horrific; it’s emerged publicly before. It also does nothing to disprove self defense, although it may be designed to shock and disgust the jury.

Videos from the shooting scene of Anthony Huber and Gaige Grosskreutz just proved that a group of people were chasing after Rittenhouse after he shot Rosenbaum. “Why’d you shoot him,” Rittenhouse is asked as Gaige Grosskreutz runs along side him. “Stop him,” someone shouts as a crowd runs after Rittenhouse. Another video, which has been widely seen before, showed Rittenhouse fall down and then shoot Huber (who was hitting him with a skateboard, rushing him and grabbing his gun) and then shoot Grosskreutz (who was moving toward him with a gun). He then tried to surrender.

It’s almost like the prosecutor was trying to overwhelm the jury – there’s so much violence, blood, and chaos – maybe they should convict Rittenhouse of something. But that’s not the law. At one point, Binger, narrating the video, said an unidentified man was about to try to “kick” Rittenhouse.

“Does anybody need medical?” Rittenhouse shouts out as he walks down the street in another scene, this one videotaped by Richie McGinniss of the Daily Caller.

“So the white dude I was talking to, had his phone slapped and blindsided,” one live streamer, Regg Inkagnedo, narrated as people vandalized cars in the Car Source parking lot. Then the shooting of Rosenbaum occurs.

Sneaking in a reference to “militia”

The prosecutor, Thomas Binger, who is trying the case instead of the county’s elected DA Mike Graveley, came across like a snake at some points in the trial, repeatedly playing snippets of video in which a live streamer not in court  referred to Rittenhouse and the men he was hanging around with that night as a “militia.”

That’s despite the fact that the defense has asserted Rittenhouse was not part of an organized militia, that a review of his cell phone showed no evidence of militia activity, and that he and a Kenosha friend had gone to clean up graffiti, act as medics, and protect a local business. They then met up with assorted other strangers who arrived in Kenosha to do the same after nights of arsons. No evidence has been presented to dispute this.

Playing endless live streams of the chaos leading up to the shootings, with snippets of Rittenhouse periodically appearing in them, only served to give the jury the context for why he was there. The videos played by prosecutors showed Rittenhouse running with a fire extinguisher (there were arson fires erupting) and just standing around guarding a gas station.

The most entertaining part of the day, perhaps, came when the no nonsense judge Bruce Schroeder went off on CNN’s Jeffrey Toobin. He asserted that people in the media were “saying things that were totally bizarre,” saying Toobin and another lawyer said one of the judge’s rulings was “incomprehensible,” even though Schroeder says “it’s our law.”

He also lit into Binger’s argument that he needed to play the live streamer’s narrating, including the unsupported “militia” commentary to establish the state of mind of Rittenhouse. The judge retorted, “This doesn’t make any sense whatsoever.” The defense objected on the grounds of hearsay for starters; as the live streamer wasn’t a witness, they weren’t able to cross examine him. Defense attorney Mark Richards said, “It’s a ridiculous argument” unless the live streamer “can read minds.”

Binger agreed to play most of the video without audio but kept conveniently turning it back on just in time to capture the word “militia” being said repeatedly (this arguably taints the jurors by painting a negative picture of Rittenhouse that isn’t supported by evidence.)

The judge also went on a tangent about another high-profile case he handled, saying, “One of the things I’ve read over and over and over again was how I messed up” the other case. “I had it 100% correct.” At another point, he used a Biblical reference to explain the right of a person to confront their accuser.

The defense got one live streamer witness to admit that there were fewer fires in downtown Kenosha after the armed men showed up to guard businesses and put fires out.

Wednesday’s tale of the tape: Net gain for the Rittenhouse defense.