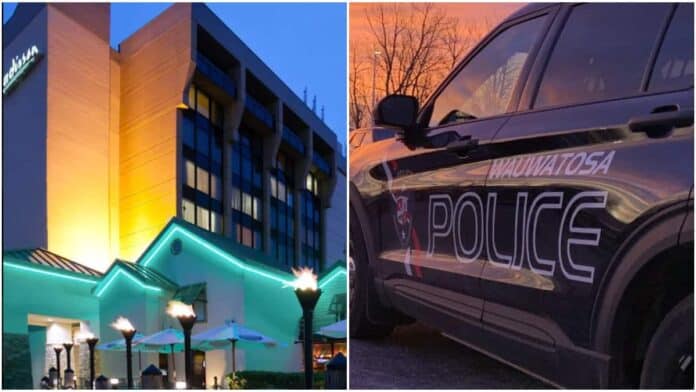 The Radisson shooting reports on the police scanner described a dangerous scene.

We’re getting reports that two officers may have been shot in Wauwatosa during a shooting at the Wauwatosa Radisson Hotel.

That comes from police radio reports and a law enforcement source, and it’s preliminary information. The Radisson is located at 2303 N. Mayfair Road. Our law enforcement source said that one of the officers appears to have been wounded in the arm and is expected to be okay. The other officer’s condition is not clear.

“Subject in custody,” an officer said at one point.

Authorities have not formally confirmed what happened or whether any officers were wounded, however, but videos did emerge showing the massive law enforcement presence at the scene.

On the scanner traffic, an officer said, “Our shooter is on the north side of the building, second floor.” The incident broke out around 11:15 p.m. on Saturday, November 6, 2021.

“If we move to that stairwell we’re directly across from him,” an officer said. “Step back even further. We have an eye on the room,” an officer responded, saying they wanted officers out of the crossfire. Scanner traffic indicated that a team of officers responded to the hotel.

“The southeast stairwell,” an officer indicated.

Officers spoke about calling a woman’s room to make sure she was okay. “Shooter is on the north side,” the dispatcher said at another point. There is a room “where the bullet went through. Check on her as well. Her husband is also in the lobby,” an officer said at one point, while another said, “have her get down on the ground,” referring to another person.

Mutual aid was called in. Civilians were trying to come up the stairs at one point. Police were blocking off streets.

They were seeking the name and information for the occupant of a room on the second floor of the Radisson. At one point a person was trying to come out of a hotel room, and was “pretty scared,” but the handle was broken and there was a hole in it. Police were trying to “work him through it.”

Officers were clearing rooms at the hotel, per the scanner traffic.

We will update this story when more information is known.