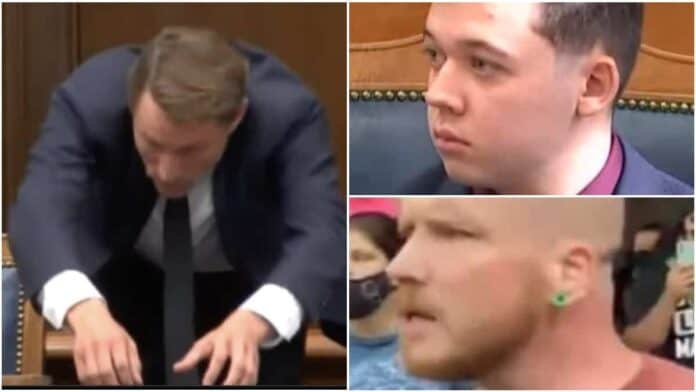 Richie McGinniss, the Daily Caller video editor who was running behind Joseph Rosenbaum when Kyle Rittenhouse shot Rosenbaum, testified in court on Nov. 4, 2021, that Rosenbaum “lunged” for Rittenhouse’s gun and “threw his momentum toward the weapon,” bolstering the defendant’s self-defense argument and blowing a major hole in the state’s case.

“It was very clear to me that he (Rosenbaum) was reaching specifically for the weapon because that’s where his hands went,” McGinniss testified. He then stood up in the courtroom, putting both of his hands out, and demonstrated the lunge. He said Rosenbaum was in an “athletic position” as if he was “running as fast as he could.” The rifle was aimed lower than Rosenbaum’s hands, which were also going lower. Rittenhouse “dodged around it,” and then leveled the weapon and fired.

“It appeared he was lunging for the front portion of the weapon,” McGinniss said, adding that Rosenbaum yelled f*** you, sounding “very angry.”

“He said f*** you, and then he reached for the weapon,” insisted McGinniss as the prosecutor questioned him on redirect. Prosecutor Thomas Binger asked whether there could be other reasons Rosenbaum would reach for a gun pointed at him, but McGinniss insisted that, no, rather than being pointed, the gun was at a 45-degree angle when Rosenbaum lunged, reaching about six inches up the barrel. He said Rosenbaum was in a low position running.

McGinniss, who was probably the witness closest to the shooting and who was positioned to see more than even the dramatic videos in the case show, was called to the witness stand by the prosecutor, Thomas Binger, but his testimony turned into a likely cornerstone for the defense team’s self-defense argument. It’s early, but McGinniss’ testimony is shaping up to potentially be THE key witness testimony in a trial in which the prosecutor has offered little evidence to counter a claim of self defense. However, none of this was a surprise; it’s consistent with what McGinniss told police at the time. Still, it was a dramatic moment.

“As Rosenbaum was lunging forward, my eyes were on the gun,” Richie McGinniss said many times. He said he believed that Rosenbaum was trying to get Rittenhouse’s gun. “He was going for the barrel of the gun?” asked defense attorney Mark Richards. “Correct,” said McGinniss, who is the video editor of Daily Caller.

Under state law, Rittenhouse must have reasonably believed that he or someone else was in imminent danger of great bodily harm or death when he opened fire, killing Rosenbaum and, a short time later, Anthony Huber, and Gaige Grosskreutz. Grosskreutz survived his wounds, but Huber died. Rosenbaum was not armed, but Huber was hitting Rittenhouse with a skateboard and touching his gun when shot, and Grosskreutz was moving toward Rittenhouse with a gun, according to videos and previous testimony in the case.

In other developments in the trial on Thursday, Judge Bruce Schroeder dismissed an elderly male juror in a scooter who was accused of making a tasteless joke about Jacob Blake’s shooting. The man declined to repeat the joke but said it had nothing to do “with Kyle,” but Schroeder said he wanted to make sure the public trusts the proceedings.

“I realized that Mr. Rosenbaum was continuing to advance and Mr. Rittenhouse was standing still, and based on the way Rosenbaum was running and lunging for the portion of the rifle, it was clear to me that something with the weapon was going to happen,” Richie McGinniss said. On cross-examination, he confirmed he told police that Rittenhouse was “trying to evade these individuals,” including Rosenbaum.

He said that he later discovered he wasn’t recording video when the shooting occurred. He did record a gruesome video after the shooting of CPR efforts to save Rosenbaum’s life, which failed. The prosecutor admitted while questioning McGinniss that a large crowd was “bashing the crap out of those cars” in the gas station parking lot where Rittenhouse ran.

He wasn’t sure what would happen – Rosenbaum grabbing the weapon or Rittenhouse shooting it – so he changed his trajectory. His eyes were focused on the barrel of the weapon. It was angled 45 degrees to the ground when Rittenhouse first stopped. “When Mr. Rosenbaum lunged…that’s when it was leveled at Mr. Rosenbaum and fired,” said McGinniss. He felt Rittenhouse had stopped because he reached a “dead end” with nowhere else to go (video shows he was cornered back among cars, and there were a lot of people clustered in the area on the other side of him.)

Binger played a previous television interview with McGinniss in which McGinniss said that Rittenhouse was “falling forward.” The prosecutor was trying to see if McGinniss would clarify that Rosenbaum’s forward motion was due to him being shot versus it being a lunge right before he was shot. That’s a critical difference because the defense’s self-defense argument in the Rosenbaum shooting hinges on convincing the jury that Rittenhouse feared Rosenbaum would disarm him of his gun and use it against him.

But McGinniss rejected Binger’s implication that his comments now and then are contradictory.

McGinniss said that, as the shots were fired, he looked down at his own legs. He felt a sound or sensation like something went past his legs. He looked down and then back up. He said that he did feel he was in danger by Rittenhouse discharging the gun. Rittenhouse is also charged with endangering McGinniss’s safety, but, again, a finding of self-defense would nullify that charge too.

McGinniss did say he couldn’t tell whether Rosenbaum actually made contact with Rittenhouse’s gun.

“At any point did you see Mr. Rosenbaum touch the defendant’s gun?” Binger asked.

“It’s hard for me to say whether he made contact with the gun but what I can say is they were extremely close, and if he did, it didn’t alter the trajectory of the weapon,” said McGinniss, adding, of Rosenbaum, it wasn’t like “got a hand on it” but, if anything, would have grazed Rittenhouse’s weapon. But he said Rosenbaum’s body was partially obstructing the barrel of the gun. “it was hard for me to say definitively that he (Rosenbaum) actually made contact. I couldn’t say definitively whether or not there was contact made,” said McGinniss.

McGinniss told Binger, “If shots had not been fired, it’s not clear to me if he would have fallen.”

Binger asked whether Rosenbaum was already falling forward. “Momentum was going forward. This term falling, I’m not going to say that,” McGinniss responded.

“Mr. Rosenbaum fell forward. It was as if if you were to lunge at somebody… shots were fired at the exact moment his momentum was going forward,” he said.