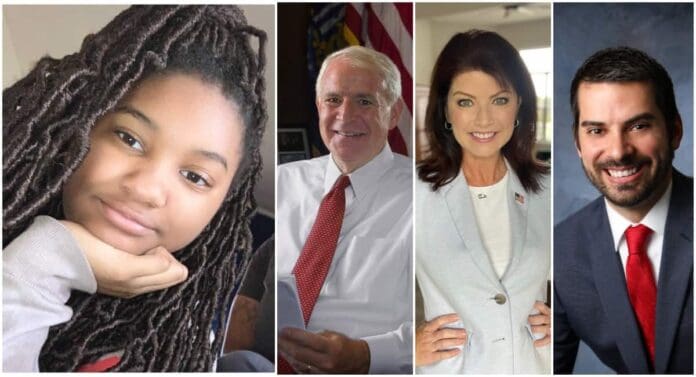 “I didn’t know what to say” –Milwaukee Mayor Tom Barrett

Kleefisch is running for governor and Toney is running for Wisconsin attorney general, both as Republicans. Toney singled out for criticism a comment Barrett made to Fox 6 about the death of an 11-year-old girl in Milwaukee, Ta’Niyla Parker. In that comment, the mayor said, “I didn’t know what to say,” explaining a day’s lag in making comment.

“Tom Barrett didn’t know what to say because like Josh Kaul, he has essentially defunded the police and ignored the homicide and violent crime epidemic in Milwaukee and Wisconsin,” Toney told WRN in a statement. “Kaul has reduced the effectiveness of the crime lab and left key law enforcement and prosecutor positions unfilled. Barrett has proposed a budget that will have 25 less police officers. We need more police, not less, to end this homicide epidemic.”

Kleefisch released a press release that said: “On the heels of another deadly weekend in Milwaukee where two children were shot, leaving one dead, Tom Barrett pushed the blame on state leadership and refused to take any responsibility. As violence in Milwaukee continues to spike, Tom Barrett has one foot out the door.”

“Milwaukee needs new leadership, and the people need it now. Milwaukeeans deserve better than a leader who has already checked out,” she said. “Mayor Barrett hasn’t done enough to stop out-of-control crime. He has one foot out the door while he waits for Washington to confirm him to his ambassadorship. Wisconsin families continue to pay the price.”

“If we want to stop crime in Wisconsin’s largest cities from spilling into the rest of the state, we need to get serious about this problem now. That means we need to hire more law enforcement officers and surge State Patrol into high crime areas. Wisconsin liberals like Tom Barrett aren’t taking crime seriously — as governor, I will.”

Toney added: “Crime in Milwaukee is personal to me because Milwaukee has become like a second home for me with my girlfriend living one block outside of Milwaukee. No parent should be afraid to let their children play in a park for fear of stray bullets but that’s exactly what we’re seeing in Milwaukee. Wisconsin needs an experienced Attorney General that we can trust, that knows how to fight violent crime, and will fight to keep our communities safe. This crime epidemic must end.”

Kleefisch’s press release listed the following facts about crime, including the lack of prosecutions reported first by Wisconsin Right Now: