Jason Church: Afghanistan Chaos ‘Rocks Me to the Core’ 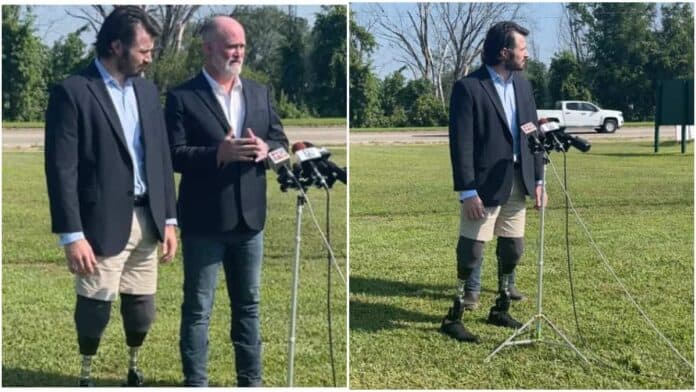 If ever a person had standing to speak on Afghanistan, it’s Jason Church. The Afghanistan veteran from Wisconsin lost two lower legs to an IED but finished law school, ran for Congress, and works for a U.S. Senator. He gave an emotional speech at a news conference this week, saying that what he is seeing on television now “rocks me to the core.”

“This has been some of the hardest days of my life,” said Church. “Four days ago when I saw what was going on, I reached out to one of my men who served with me in Afghanistan. I knew based on our mission that there was a videotape of me being injured, of my men coming up to me and putting their lives on the line for their brother in arms. And for nine years I buried the scene. I knew it existed, and I didn’t want to watch it.”

Church described how, the other day, he watched the video at long last with his wife. “We watched that boy, who was a graduate of ROTC, at an institution in this community. A boy on the ground. When I looked at myself in that video, I saw a kid. I saw a young man whose life had changed instantly. Who because he believed so much in what this country could be, he was content with dying.”

Church spoke alongside Derrick Van Orden, a former Navy SEAL who also served in Afghanistan and who is running for Run Kind’s seat in Congress as a Republican. Church has endorsed Van Orden for Congress. “We have seen the tip of the spear. We have seen bad decisions from leaders lead to deaths that could simply be avoided,” said Church.

These issues “are real to us,” said Van Orden. “…This means something to us…I am going to go to Washington D.C. and I am going to fix this, because I know what it means…It means the life and death of American men and women and our allies. And it has got to stop.”

“This is possibly the greatest foreign policy debacle in the history of the country,” added Van Orden. “Certainly in my lifetime. Certainly, this did not need to happen. The incompetence of the Biden administration in handling this crisis, it’s impossible to really quantify that, how large of a foreign policy failure this has been. A complete lack of planning and showing in real time how important it is to have competent leaders in Washington D.c. in the executive branch….This did not need to happen…we have 15,000 American citizens unaccounted for in Afghanistan. That’s 288 times the amount of hostages we had in Iran…that stopped the world.”

The National Security Advisor, Secretary of State, Secretary of Defense and Chairman of the Joint Chiefs of Staff should resign immediately, said Van Orden, saying they have all underperformed and failed. Van Orden said he is concerned how the Biden debacle is affecting the veterans in the community and in the United States, so he asked Church to come by.

Van Orden called Church an incredible, patriotic American. “He served his nation and has a right to speak to every human being in the Biden administration and all the way down to make sure these things don’t happen again in the future,” said Van Orden.

Church said of what is in that video, “I told my men to aid the others who were screaming around me because I loved them so much and I love this community so much and I love this place so much and to see what is happening on the television right now rocks me to the core. It rocks veterans across this nation to the core. We as a country failed to give them a proper mission. This cuts across political lines. When I laid there and I looked at myself, I forgot what that felt like. The politics of the last few years has eroded our competence in our own institutions, I allowed it to erode in myself. I forgot about it. But there is a way. When I asked the other day whether losing my legs was worth it or not. I can give you an answer. There will be people who are coming into this country down the road from here. They fought for this country. They did it believing in us, on our word, on our integrity as a nation. That to me goes far beyond politics.”

It’s been announced that thousands of Afghan refugees could be coming to Fort McCoy in Wisconsin. Van Orden stressed the importance of screening the refugees.

Church said: “We need to embrace them. The ones that come here and have fought for their country and love their country and who were betrayed by the actions I’m seeing on TV today. You owe it to them and you owe it to us, all of us who have bled over there and who have seen their brothers and sisters in arms die. We all owe it to them and to us. I implore you all…that we don’t isolate them, don’t treat them like second class citizens. We treat them like the Americans I went over and fought in Afghanistan to die for. It’s about time this country grew up. This place is amazing. It’s worth fighting for…prove it to us. This place is amazing. It’s worth fighting for. It’s worth dying for. I ask you all as these events unfold over the next months to keep what I have said in mind.”

Church also ran for U.S. Congress as a Republican. The Wisconsin native was deployed to Afghanistan. On August 23, 2012, in Panjwai (Pan-JA-Way) province, “Jason and nine other members of his platoon were involved in an IED explosion. The IED blast resulted in the amputation of both legs below the knee. Jason went through 21 surgeries at Walter Reed National Military Medical Center in Bethesda, MD. On July 31, 2014, First Lieutenant Church received his promotion to Captain and medically retired from the U.S. Army,” his website says. He went on to earn a law degree and serve as State Counsel and Northwest Regional Director for U.S. Senator Ron Johnson.

Van Orden is running as a Republican for Ron Kind’s Congressional seat in western Wisconsin. He lost to Kind by only 11,000 votes in the last election and is considered one of the Republicans most likely nationally to pick up a Congressional seat for the GOP. His combat deployments were to Bosnia Herzegovina and multiple combat tours to Afghanistan and Iraq. Additionally, he served in the Horn of Africa, Asia, Europe, and South and Central America. He starred in the motion picture Act of Valor.