Milwaukee County Sheriff: Inmates Shall Now Be Called ‘Person in Our Care’

The Milwaukee County Sheriff’s Department is now calling “inmates” in the county jail “person in our care” and “occupants,” according to an internal memo obtained by Wisconsin Right Now.

It’s labeled “Agencywide Changes in Terminology,” and it was signed by Denita R. Ball, chief deputy, Milwaukee County Sheriff’s Office. It says, “to be read at all roll calls and posted. Members to read and understand.”

On the question of inmates, it says, “The phrase ‘inmate’ will be changed to Person in our Care or Occupant except in certain legal or policy contexts.” The change is coming at a time of skyrocketing violent crime in Milwaukee. 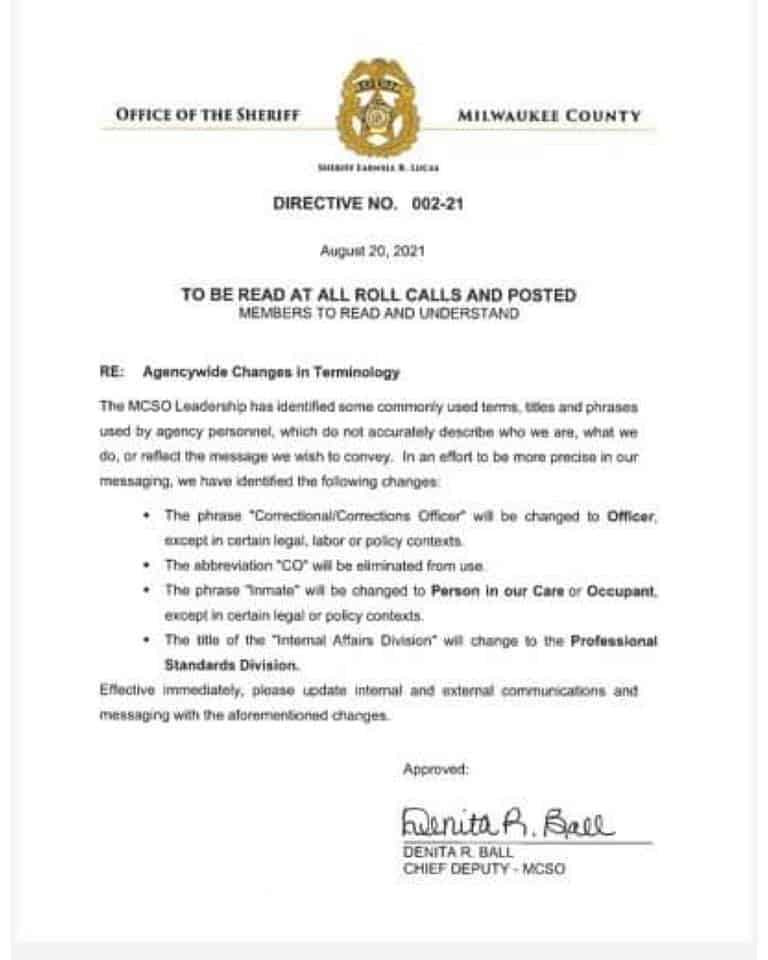 There used to be a time where the goal of jail and prison was to protect society and extract punishment for wrongdoing. Now there is a trend, at least in Democratic jurisdictions, to change the language to frame jail in a way that humanizes inmates and focuses on their feelings and building their self-esteem. What’s next? Will District Attorney John Chisholm change the term “criminal complaint” to “occupant complaint” or “legally challenged person complaint”? How about “misunderstood person complaint”?

The Dane County Sheriff recently announced that inmates in that jail would be labeled “residents.”

Who are some of the current “occupants” of the Milwaukee County Jail? Here’s a few random occupants:

The directive lists other language changes too:

The phrase “Correctional/Corrections Officer” will be changed to Officer, except in certain legal, labor or policy contexts.

The abbreviation “CO” will be eliminated from use.

The title of the “Internal Affairs Division” will change to the Professional Standards Division.

“The MCSO Leadership has identified some commonly used terms, titles and phrases used by agency personnel, which do not accurately describe who we are, what we do, or reflect the message we wish to convey.” The changes are “an effort to be more precise in our messaging.”

We reached out to Sheriff Earnell Lucas for comment and will add it into the story if it’s received.