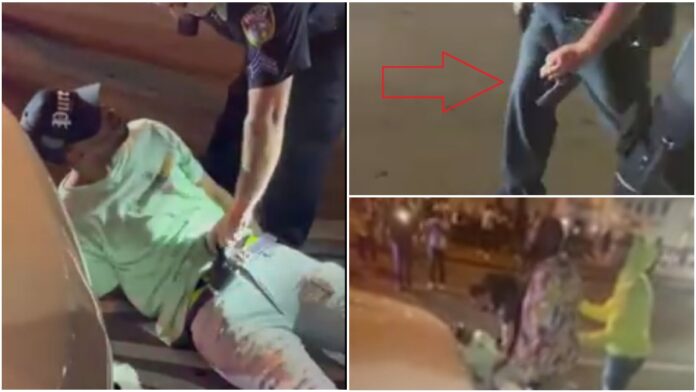 “There is simply no order,” a frustrated law enforcement source told Wisconsin Right Now. The source said officers have basically been told to take a hands-off approach due to fear that activists will riot.

“Several of the city leaders want us to police less. This chaos is the result of less policing. We definitely feel as though we have no power to take back control of the situations based on the hands off approach we have been told to use. It’s like we have to put our blinders on,” the source said.

“There were people running with guns everywhere,” a second law enforcement source told us. “And jumping up and down on squads.”

“You want a news story go to Water Street on a Friday or Saturday night,” a ride share driver told us. “Pure chaos. People going down there to walk around, hang out, smoking weed with police right there, a lot of police resources being wasted…there was a shooting tonight. I came in contact with some guys from New York City that were shook up and couldn’t believe it…Police will block off the main streets so reckless driving is then happening on side streets…it’s like a smaller club midtown and been like that for about a month now.”

We started hearing about the absolute chaos and violence on Water Street last summer. A police source told us to check it out after mid-intersection gunfire erupted in the street. It didn’t used to be that way. But a constant diet of anti-police rhetoric and destructive actions from city leaders have led to an exceptionally dangerous environment. The day after a law enforcement source predicted to us that someone was going to get seriously hurt as the lawlessness erupted anew this month a homicide on Water Street, which used to be a peaceful college bar zone, occurred and, on the heels of that, a shooting.

A 31-year-old man was shot and killed at Water and Knapp around 1:40 a.m. June 12. Four people were murdered over the weekend throughout the city and 13 wounded as crime explodes. Two men were shot early June 13 in the 500 block of North Water Street. The lawlessness has migrated from midtown, where there was a massive barrage of gunfire recently, to downtown.

This video shows a man being arrested at bar time downtown on June 12, 2021, with a gun in his waistband with an extended magazine.

As so-called city leaders focus on demanding less policing or sit in silence and some in the media fret about using people’s mug shots in stories or write headlines about free gun locks, downtown is spinning out of control with little push back. “Violence prevention advocates” don’t ever seem to mention the destruction of a key institution that is needed to keep order: MPD. Downtown business owners survived the pandemic, they’re getting ramped back up, and now they’re being victimized by this. WTMJ-TV described the scene as “seas of people.”

“The crowds are so big now it’s not safe for the cops or the rest of the crowd to go into such a large crowd in order to just make an arrest for a ticket,” a law enforcement source told Wisconsin Right Now.

You wouldn’t know it from the media, which gives sanitized, abridged, soulless accounts of shootings, often with little else. Shootings, reckless driving, people riding on cars, and, now a homicide, have turned Water Street into a free-for-all or scene from the movie Mad Max.

The second source thinks administrators want cops to act, but “there’s no officers. There’s not enough manpower. We’re defunded. They were shooting all night.” We previously reported that the city has been systematically decimating MPD, which is down 18% in sworn officers since the mid 1990s.

“Imagine being a bar owner, dealing with the oppressive rules for the last year, losing money, looking forward to opening up again and now having to watch this chaos,” the source said. “The idea of taking a hands off approach is based on a concern for possible disorder. A use of force situation would look bad on video and there is a concern that the activists will riot downtown.”

We are withholding the name of the sources in this story for their own protection due to the political climate.

“There are open and blatant violations and the violators know the officers will not do anything. The recent homicide was incredibly unfortunate but also almost predictable,” said one of our sources.

This source said that law enforcement has used a Broken Windows type strategy in the past that works, but they aren’t being allowed to take proper action now.

“When we used to give tickets to violators for minor offenses, the groups of people with no intention of going into the bar to spend money came down to Water Street less,” the source said.

“Actual bar customers, of all races and backgrounds, came down and had a good time. There are now thousands coming down just to be part of the street party until well past bar time. The people who actually went into the bars and paid for drinks used to be able to safely walk from bar-to-bar and the bar employees could feel safe while working.”