Crazy Fight at a Milwaukee George Webb Caught on Video 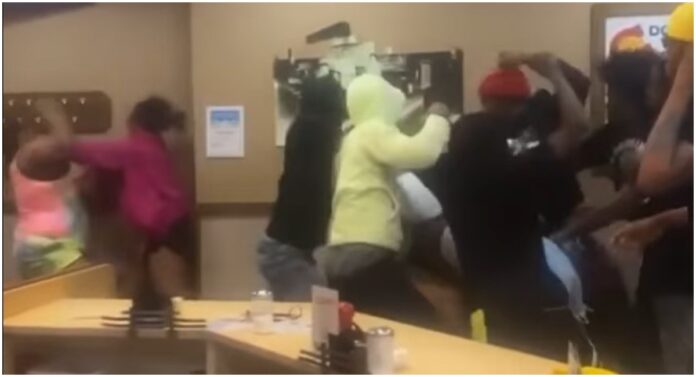 A local construction company owner captured a crazy George Webb fight in downtown Milwaukee on video. The brawl involved multiple men and women who started pummeling each other.

Dave Will recorded the video and posted it on his Facebook page. We reached out to him for an interview. “It was the night before I posted it,” he said. “I don’t know what prompted the fight. I’m just glad no one got seriously injured.” He noted, “Also I love George Webb’s chili.”

Will Was Ordering Food As the George Webb Fight Broke Out

According to Will, “I own a construction company & was ordering scramblers & chilis for my guys.” That’s when the fight broke out. He said the fight occurred at the George Webb’s restaurant on Old World 3rd Street in downtown Milwaukee.

Will wrote on June 7, 2021, “Next time you’re in downtown Milwaukee be sure to stop by George Webb Restaurants on Old World 3rd Street. I personally recommend the ham scrambler with a side of chili. George Webbs has great chili.”

He added as an aside, “If you know anyone who needs any work done please refer them to PAVI Solutions, LLC.”

We reached out to Milwaukee police for comment. They told us:

Milwaukee Police responded to a fight that occurred on June 5, 2021, at approximately 6:03 a.m., on the 800 block of N. Old World Third Street. Several individuals were fighting inside a restaurant. The individuals left prior to police arrival. No injuries or damage to property was reported. No arrests were made. Anyone with any information is asked to contact Milwaukee Police at (414) 935-7212 or Crime Stoppers at (414) 224-TIPS or P3 Tips App to remain anonymous.