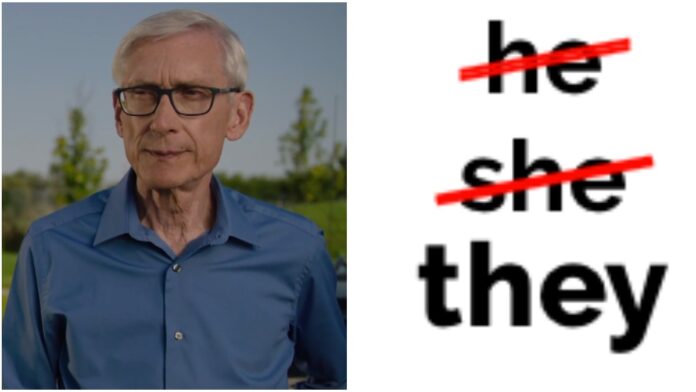 No pronouns for you!

Despite all of the other crises facing the state (violent crime in Milwaukee, for example), Evers is spending his time ordering state agencies to use “gender-neutral terms and pronouns” and to write any documents in a way that eliminates “the need for pronouns.”

“Gov. Evers signed Executive Order #121 and directed Evers Administration cabinet agencies to use gender-neutral language whenever practicable in external documents, including but not limited to: using gender-neutral terms and pronouns, drafting to eliminate the need for pronouns, omitting superfluous gendered words, and making any reference to gendered family relations,” the press release from Evers says.

Do as I Say, Not Do as I Do: Gov. Tony Evers’ Pronouns Hypocrisy 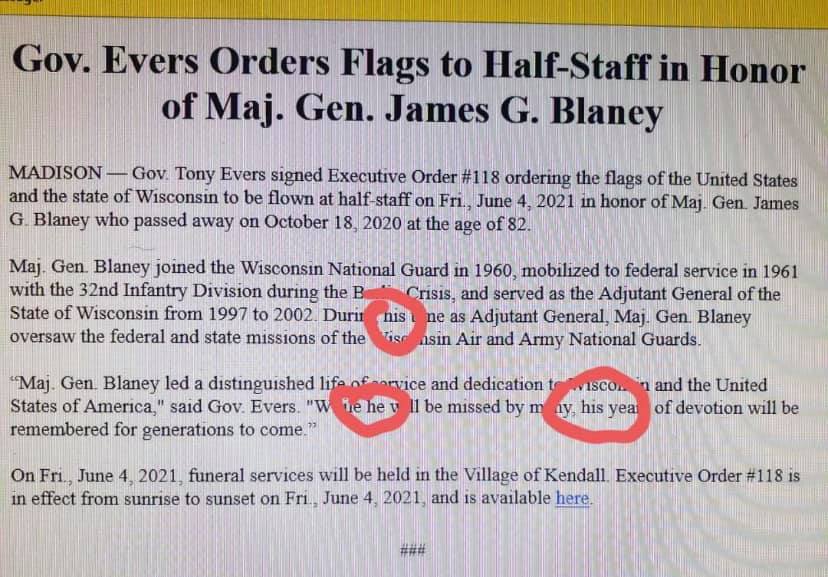 However, we caught Evers violating his own pronoun rule, admittedly before he issued the executive order. But his office hasn’t changed the references to put him in compliance with his own mandate. For example, his office referred to a war hero, Maj. Gen. James G. Blaney, with the words “he” and “his” in a recent press release. We’re guessing that would have been fine with Maj. Gen. Blaney, who “mobilized to federal service in 1961 with the 32nd Infantry Division during the Berlin Crisis, and served as the Adjutant General of the State of Wisconsin from 1997 to 2002.”

Evers’ new executive order is silent on which pronouns should be used to avoid gendered pronouns or avoid making “reference to gendered family relations.”

It occurred to us that the state Department of Corrections, a state agency, has separate prisons for women and men. What are they going to do in the new gender-less Tony Evers’ administration?

In addition, Evers on June 1 “signed Executive Order #120, ordering that the Rainbow Pride Flag be raised over the Wisconsin State Capitol during the month of June in celebration of Pride Month. The Rainbow Pride flag will fly over the East Wing of the State Capitol building beginning at noon on Tues., June 1, 2021, and ending at sunset on Wed., June 30, 2021.”

Furthermore, Evers “authorizes state buildings and any jurisdiction of the state of Wisconsin to fly the Rainbow Pride Flag during the month of June. ”

“The Rainbow Pride flag is a symbol of our state’s commitment to celebrating and supporting LGBTQ Wisconsinites and is emblematic of the history of the community and the hard fought battles to be seen and heard, and to live fully with dignity and respect,” said Gov. Evers. “It’s also a sign of our future, the progress we have yet to make, and the more inclusive, more just state we will build, together. I am glad today to extend this tradition statewide in encouraging communities and all of our state buildings to celebrate Pride and the diversity, resilience, and joy of LGBTQ individuals across our state.”

It’s the third time the Rainbow Pride flag has flown over the Wisconsin State Capitol.

“Gov. Evers ordered the flag to fly over the State Capitol building for the first time in Wisconsin state history in June of 2019,” the release says. “As was the case in the past, the Rainbow Pride flag will not disrupt other flags that regularly fly over the State Capitol building. The U.S. flag and Wisconsin state flag will continue flying on the East wing flagpole above the Rainbow Pride flag. The POW-MIA flag will continue flying on the North wing flagpole as it does every day.”

Evers also signed an executive order that “requires the Department of Health Services, Department of Corrections, and the Department of Children and Families to take appropriate steps to expressly disallow payment of state and federal funds allocated by their respective agencies for conversion therapy for minors. Numerous medical associations and professional organizations oppose the practice of conversion therapy and according to research conducted by the Family Acceptance Project, adolescence conversion efforts contribute to higher risks of depression and suicide for LGBTQ youth.”

“In addition to celebrating the resiliency and joy of the LGBTQ community, Pride also offers an opportunity for us to reflect on how the state and our communities can be better allies,” said Gov. Evers. “These executive orders today recognize the work we have to do as a state to protect, support, and celebrate all LGBTQ Wisconsinites, especially our kids, and ensure our state is a safe, inclusive, and just place where every person has the resources and support to thrive.”