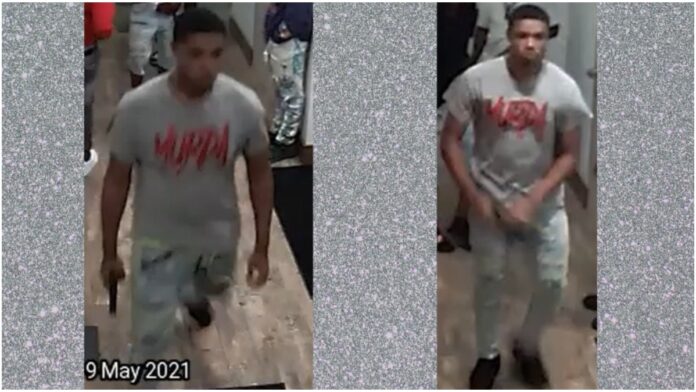 Wauwatosa police are seeking the public’s help in identifying a man in a “MURDA” shirt who they say was holding a handgun after shots were fired at the Homewood Suites.

On May 2, 2021, shortly after midnight, “an argument occurred at the Homewood Suites on W Burleigh St in Wauwatosa where shots were fired from a handgun. No injuries were reported,” police wrote in a news release.

The Wauwatosa Police Department is seeking the public’s assistance in identifying the subject in the above image. “The subject is described as a medium-complexion black male, with short dark hair, 5’08” to 6′ tall, 175-200 lbs., last seen wearing a light gray t-shirt with ‘MURDA’ in red lettering across the chest, stonewashed light jeans with several tears in them and black shoes. He is holding a black, semi-automatic handgun in his right hand,” police wrote.

“If you know this person or have any information regarding the shooting at the Homewood Suites, please contact the Wauwatosa Investigative Division at 414-471-8430. Those who wish to remain anonymous can call Wauwatosa Crime Stoppers at 414-771-TOSA (8672), text-a-tip to CRIMES (274637) – include TOSA plus your message, or download the “P3 Tips” app on your smart phone. More information: http://www.tosacrimestoppers.com/.”

This incident comes as we previously reported that shootings in Wauwatosa are on the rise this year, as well as other crimes, such as auto theft, which is skyrocketing.

You can see the recent crime stats for Wauwatosa police here.