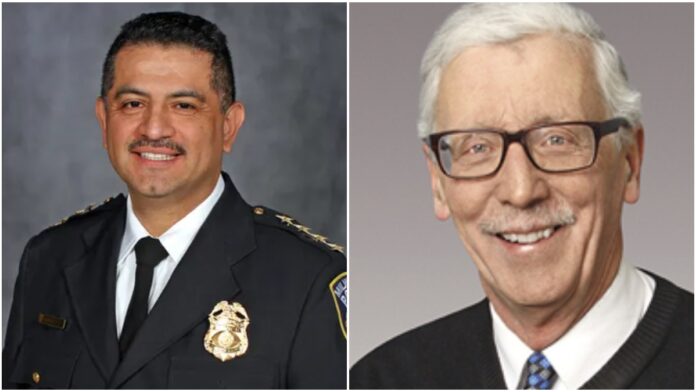 The “situation at City Hall, it’s dysfunctional these days. The Common Council has a bunch of people who only want to hear their own voices.” -Attorney Franklyn Gimbel

A Milwaukee County judge has ordered the City of Milwaukee to reinstate Alfonso Morales as Milwaukee police chief but stayed the order for 45 days to give the city time to reach a settlement with Morales.

That order came down on May 19, 2021, from Judge Christopher Foley after a motion hearing. Morales appeared at the hearing virtually with Attorney Raymond Dall’Osto and Attorney Brianna Meyer. The city appeared by Attorney Nathaniel Cade Jr.

“Matter before the Court today on a Motion to Enforce filed by petitioner. Court hears arguments. Court Orders Petitioner reinstated to the position of Chief, as stated on the record. Court STAYS the order for a period of 45 days, to allow for a possible settlement. Order to be submitted for signature, under the five (5) day rule,” the court records say.

Morales Reinstated: His Attorney Had Accused the City of Disarray & Discord

Morales had asked the judge to immediately reinstate him as Milwaukee’s police chief, saying the city is filled with disarray, discord, and inaction.

We spoke to Morales’s lawyer, Franklyn Gimbel, previously when Morales filed that motion. He told Wisconsin Right Now that Morales “wants to be chief with the authority of a chief and not be a puppet of the Fire and Police Commission.”

We have reached out to Gimbel for reaction to Morales’s reinstatement.

We obtained the full affidavit in which he is asking a judge to restore him to the job. You can read it here.

The affidavit asked the court to “order that Chief Morales return to work forthwith and that Respondends put him back into the position he was in prior to the FPC’s illegal action,” as well as pay him back salary and benefits and attorney’s fees since Aug. 6.

Gimbel said that Morales’s legal team had decided to take “some affirmative action” to deal with the “horrific treatment they visited on him (Morales).”

“We are asking him (the judge) to reinstate him (Morales),” said Gimbel, who denounced what he called complete dysfunction at City Hall. He blames the Common Council and Fire and Police Commission for not getting something done, with City Attorney Tearman Spencer acting as their agent.

Since Judge Foley reversed Morales’s Aug. 6 demotion on Dec. 18, without giving the city orders for what to do next (at least until May 19), Morales’s side has “been talking about one of two roads,” said Gimbel. “One is reinstatement and one is buying out his contract.” But no settlement offer has come, so the new court filing is seeking reinstatement. Gimbel said there’s been no “substantial and reasonable” progress made.

Gimbel said the fact Morales retired doesn’t stop the city from reinstating him as chief. “We talked to the folks at the pension office, and there are methods and means by which he can be reinstated,” said Gimbel.

Gimbel said the “situation at City Hall, it’s dysfunctional these days. The Common Council has a bunch of people who only want to hear their own voices.” City Attorney Tearman Spencer, who has faced harassment allegations, doesn’t have the confidence of anyone in city government, said Gimbel. He believes if former City Attorney Grant Langley was still in office (he was ousted a year ago by Spencer), the situation would be resolved.

“We’ve had conversations, but they have not had any real direction or authority,” said Gimbel. “Nobody has come to the table with what it takes to settle these things.”

Gimbel said Morales wants to serve as police chief but he doesn’t want a situation where he’s put in “to set him up to fire him again.”

He noted that Morales has broad departmental and community support. “There’s never been a chief in my 60 years as a lawyer who has had the support of the rank-and-file like he does,” he said.

Gimbel said that Nate Cade, the third-party attorney hired to deal with the matter, ddidn’t seem to be “rushing to get a deal done. I don’t know if he has control over his clients. We are at the point in this journey, where we need some action. It’s time to ring the bell to get this thing addressed and let a judge tell us what to do.”

The affidavit says that Morales’s lawyer contacted counsel for the City Attorney’s Office “to inquire about arrangements for Petitioner to promptly resume his duties as Chief of Police and to set a time for his return to work as Chief.”

It says Morales was told that “there could not be an immediate return and reinstatement of Petitioner Morales to work as Chief at the Police Department and that he should not show up for work at the Police Administration Building.” The city wanted time to determine whether they would have him return to work or reach a financial settlement.

A meeting was held at the end of December. On Jan. 17, Gimbel sent a letter to the city requesting a decision. He was told the city would “be in touch.”

No specific return to work date or alternative offer for settlement and buy-out came.

In mid-February, it was learned there was “considerable disarray and dysfunction with the Respondent FPC, as well as discord and disagreement between certain members of the FPC and the City atatorney’s Office.”

The FPC then retained private counsel to represent it going forward. That is Attorney Nate Cade. Cade said he might be able to establish a specific return to work date for Morales in March of 2021.

Cade was told by Gimbel on March 2 that “Chief Morales is ready and willing to return to the Chief’s job this month.”

Cade said he would be in touch and was waiting to hear from the pension office. On March 23, he said there were impediments to Morales returning to work as police chief based on what the city pension personnel advised.

Morales’s lawyers asked for clarification on why pension concerns would prevent Morales’s return.

On April 15, they met with ERS Director Jerry Allen. He explained the options. He said “there is no legal reason or impediment from a pension perspective that prevents” Morales from returning as chief.

There is past precedent; Robert Ziarnik retired from the Police Department and was subsequently appointed as chief some months later.

Gimbel said that the “discord, distrust and uneasy standoff that currently exists at City Hall between the City of Milwaukee, its FPC and the City Attorney’s office” is “no excuse or good reason” for continued “disobedience” of the Court’s order.