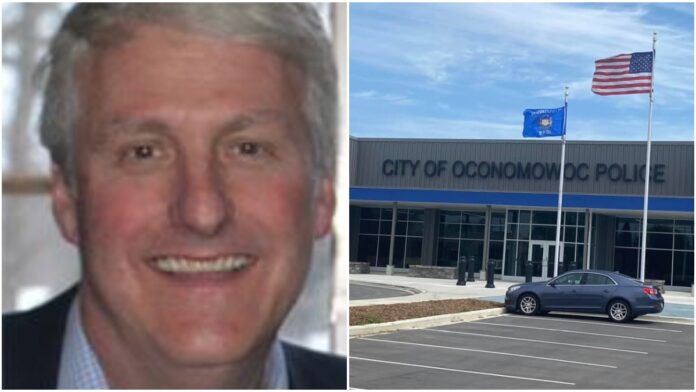 Oconomowoc Mayor Robert Magnus ordered the city’s police chief to take down the thin blue line flag outside the Police Department, and it’s got some officers incensed, a legislator and alderman tell Wisconsin Right Now.

Rep. Barb Dittrich, the Republican lawmaker who represents Oconomowoc, confirmed to Wisconsin Right Now that a police officer complained to her “that the mayor ordered the police chief to take the thin blue line flag down” because the mayor felt “that it was racist.”

“While I get along with the mayor, I’m disappointed that he made this decision except during police appreciation week,” Dittrich said. She said she asked the mayor about it, and he confirmed that he did order the thin blue line flag removed.

We reached out twice each to Magnus and Police Chief James Pfister, but neither responded.

We also spoke to Oconomowoc Ald. Lou Kowieski. He was a write-in candidate for mayor. “He (Magnus) did order it down,” Kowieski told WRN. He said he did not know whether the mayor had “referred to it as racist” though. “I believe it was up for police week,” he said. He also said the mayor ordered the police chief to take down the flag, and that it was then taken down.

“I support flying the blue line flag,” he said. “There needs to be a policy to appropriately display it and where and how.” For example, he doesn’t believe it should replace the American flag or fly above it, but perhaps it could be on a separate pole or flown beneath the American flag.

Asked why he supports flying the thin blue line flag, Kowieski said, “I support our police officers and overall our first responders. Whether it’s a blue line flag or red line flag, when you go to work and potentially aren’t coming back as a result of providing your service to the community, you should be recognized and supported appropriately.” He said he and other aldermen started a Facebook page called “Oconomowoc Supports the Blue.”

We drove past the Oconomowoc Police Department on May 18, and, sure enough, the flag is not flying there.

All of this occurred at the tail end of National Police Week, which ended May 15.

Magnus is serving a two-year term that runs from April 21, 2020 – April 19, 2022. He was labeled a political newcomer when he sought office. He emphasized his business background and many years living in the community.

This comes on the heels of the controversy over the UW-Madison police chief banning the thin blue line symbol.

What does the flag mean? According to the San Diego Union-Tribune, to law enforcement, the thin blue line means “police are the force that stands between law and order and chaos, the force that safeguards society against disorder.” Thin Blue Line USA explains, “The black space above the blue line represents society, order and peace, while the black below, crime, anarchy, and chaos. The Thin Blue Line running between them, ‘law enforcement,’ keeps crime from descending into society.”

The flag has caused controversies throughout the U.S. as some have argued it’s a response to the Black Lives Matter movement. The thin blue line first showed up as a law enforcement reference in the 1950s, however, when Los Angeles Police Chief Bill Parker used the term in a force dealing with corruption controversies. In 1854, a British regiment in the Crimean War was known as the Thin Red Line because of its red uniforms, when it “stood its ground against a Russian cavalry charge,” the Tribune reported.