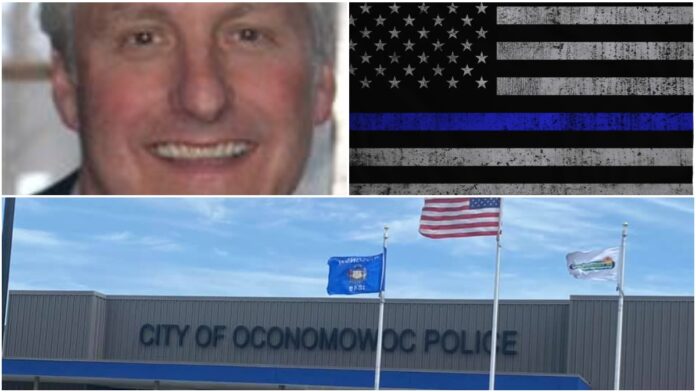 We’ve obtained emails that embattled Oconomowoc Mayor Robert Magnus wrote an upset constituent, promising the thin blue line flag will go “back up” and admitting taking it down “was wrong and done at the wrong time.”

The constituent, who provided the emails to Wisconsin Right Now, wrote Magnus on May 19, “Mayor Magnus, It is being reported that you took down the Thin Blue Line Flag- is there a reason for this? The brave officers of Oconomowoc risk their lives daily to serve and protect.”

Magnus responded, “I fully respect the flag for what it represents…it will be up again soon.”

The mayor caused a firestorm in Oconomowoc by ordering the police chief to take the flag down where it was flying during National Police Week outside the Oconomowoc Police Department. We previously quoted a state rep, Barb Dittrich, and alderman, Lou Kowieski, who were critical of his decision. We’ve reached out three times to Magnus for comment and twice to the police chief but haven’t heard back.

However, the upset constituent’s emails from the mayor give a window into his current stance on the flag, which, to law enforcement, represents police being the dividing line between chaos and order and, thus, protecting the community. The flag has caused controversy around the country as a focal point of criticism from Black Lives Matter.

“Yes and it was wrong and done at the wrong time. I take the ownership of that,” Magnus also wrote the constituent about removing the flag.

We wrote Magnus to inquire when exactly the flag will be going back up.

The mayor has been slammed on social media, and he was taken to task at a Common Council meeting by a citizen. We’ve also heard that many officers are unhappy with the decision to remove the flag.

The mayor was absolutely blistered by another citizen at the Common Council meeting this week over the topic.

At the May 18 Common Council meeting, the citizen called for the police officers to take a no-confidence vote in the mayor because of the flag’s removal. He gave his name as Chris Kowieski, an Oconomowoc resident. He is chief operating officer at Wisconsin State Fair Park.

“It’s my understanding that the mayor’s ordering the lowering of the thin blue line flag…” he said. He gave a history of National Police week.

“Let me tell you what the thin blue line flag means to me. I will use this analogy to humanize it to demonstrate the disrespect and idiocy that lowering the flag demonstrates,” he said as the mayor listened.

“If the flag were a picture, it would be pixelated; if you looked closer, you would see the faces of the individuals of law enforcement. Those individuals are members of out community. You probably know some.. you are probably friends of some. One of my friends was recently shot in the line of duty, and he lives in this community. They are fathers, mothers, brothers and sisters. They wake up every morning to work just like the rest of us, but they go to work every morning with a better chance than most of not going home. They do this for the betterment of our community and country. Without them, there is chaos and anarchy. They are the people you call when others come to harm you, and they keep us safe.”

He added: “To order the lowering of the flag at all is a slap in the face… to do it during the memorial week on which those who lost their lives protecting you is a despicable action that can only come from a weak leader who bends to a minority with questionable grievances. I demand that you raise the flag. I recommend that the city of Oconomowoc police force take a vote of no confidence in the mayor. I hope enough people find out about this reprehensible display of leadership and character by our mayor that you not only lose the next election but are humiliated by the results. You have exposed yourself as a weak-kneed Marxist liberal in a community that has no use for it.” The mayor didn’t respond but called up the next speaker.