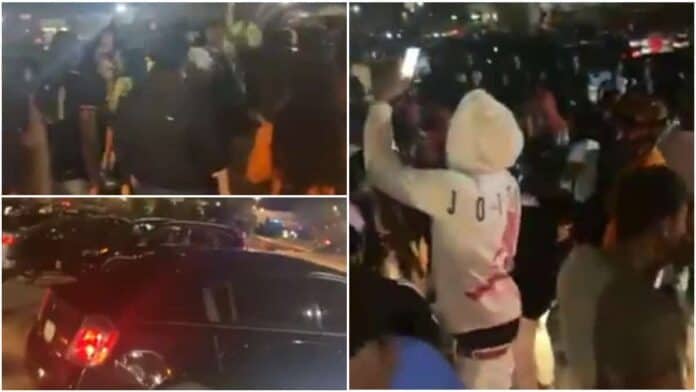 We asked Tom Barrett’s spokesman why the city hadn’t taken action against “Club Midtown” before the chaos at the Midtown shopping center culminated in gunfire that left two men wounded. Videos show total disregard for COVID-19 guidelines in the parking lot before gunfire erupted, not to mention the public safety and quality of life neighborhood concerns.

Check out these videos from Club Midtown over the weekend. It was a shoulder-to-shoulder crowd with cars packing the parking lot and impromptu twerking demonstrations. People on social media said people were carrying firearms openly.

Even though the Common Council president, Cavalier Johnson, implied in a press conference that this was the first Club Midtown gathering since last year, a police source told us it has been going on for a “month or two.”

“No resources,” he said, adding that they are outnumber by the many kids in “stolen cars with stole guns who aren’t afraid to shoot at cops.”

The police source added: “This is what a starved department from hiring looks like.” He said the city could budget for “code red,” meaning flooding cops downtown and in troubled areas on Friday and Saturday nights but won’t.
Here’s what the area looks like by day. It used to be a Lowe’s home improvement store.

“I was told by a senior police department official yesterday that the department is looking into possible nuisance actions against the mall,” said Barrett’s spokesman Jeff Fleming. We also asked him why the city’s Health Department hadn’t acted as aggressively toward Club Midtown before the gunfire as it did toward the pro-Trump rally at Serb Hall over the summer.

“The distinction is that Serb Hall is a, was a licensed, commercial business with an approved health safety plan,” Fleming told Wisconsin Right Now. “My understanding is there is not a business associated with ‘Club Midtown,’ and the Milwaukee Health Department has never enforced public safety orders against individuals.”

The incident came against the backdrop of a District Attorney who is refusing to charge 60% of criminal cases, including felonies and is not charging some serious gun cases brought over by MPD, as we previously reported. It comes as members of the Common Council call for defunding police and as the city has reduced the number of sworn officers on the streets by 18% over the years.

In a news conference, Acting Milwaukee Police Chief Jeffrey Norman said “300 shots were fired in that particular area” on Sunday evening, May 2, 2021. “We only have two adult Milwaukee individuals that were harmed in that situation but it could be a lot worse. Right now we have no one in custody.” Norman, who has been on the force for more than two decades, said, “I have never seen something like this before, in this context. There was a number of people at this area who were involved. How many weapons were fired, we still have an ongoing investigation. This is unacceptable.”

We asked Fleming why the Barrett and the city Health Department didn’t take action against Club Midtown before the shooting due to the COVID violations as well as the quality of life and safety issues. We contrasted it to the Serb Hall Trump rally. We asked, “Why has this been allowed to go on?”

Here’s Fleming’s response to us in full.

“The distinction is that Serb Hall is a was a licensed, commercial business with an approved health safety plan. The Health Department worked directly with the general manager in the days leading up to the Serb Hall rally, and he agreed with the precautions (seats, social distancing, masks), which permitted the event to go on even though it would not have been permitted under the rules in place in November and December. Also, for the record, the rally was not ‘shut down’ by the health department. The only action taken at the rally came from general manager Nick Alioto (the guy who took the mic, got jostled around, and died a couple of weeks later from natural causes – although he had an active COVID infection at the time of his death). The Health Department’s only step would have been issuing one or more citations in the days following the event. My understanding is there is not a business associated with ‘Club Midtown,’ and the Milwaukee Health Department has never enforced public safety orders against individuals. That said, I was told by a senior police department official yesterday that the department is looking into possible nuisance actions against the mall.”

The pro Trump rally at American Serb Hall ended in chaos over the summer after the City of Milwaukee Health Department decided to cite the venue $2,000 for COVID-19 restriction violations (one violation was because rallygoers didn’t remain seated), witnesses said a BLM supporter shoved a woman, a city health inspector was shoved by a person who called him a “commie,” and a representative of Serb Hall ended up on the ground after telling rallygoers that he didn’t want to lose the facility’s license.

Fleming said at that time that the Health Department wasn’t planning to shut the event down. “They were going to give violations. It was the manager who was attempting to shut it down, fearing for his license,” said Fleming.

Norman stressed that people need them to provide information to solve the shootings. “We are entering into warmer days, summer months, where we are seeing an uptick in violent crime…I am also concerned about the lack of activities for individuals to be involved in.” He said he was announcing a “call to action. Public safety is a team effort. This is not only up to MPD about how to make our city safe.”

Common Council President Cavalier Johnson said in the news conference, “I represent the aldermanic district where Midtown Center is… I was in deep thought mourning the loss of life in a mass shooting in Green Bay and then we had to turn our attention… to our own family, our own neighborhoods, because some individuals decided to congregate at a place that’s closed and out of business and fire several hundred shots around in the longest sustained gunfire I’ve ever heard living in this city including in some of the most depressed neighborhoods in Milwaukee.”

Johnson was asked how long Club Midtown gatherings have occurred, and he said there was one last year, but people moved barricades to prevent another gathering. “Evidently that response needs to be escalated.”

Midtown center is the “economic heartbeat of the northwest side of the city,” Johnson said. He said people could go to Mayfair instead but they probably wouldn’t feel safe there because there was a mass shooting there too. “There continues to be inaction on guns.”

Norman said there’s an ammunition shortage across the country so police are trying to figure out where the ammo is coming from.