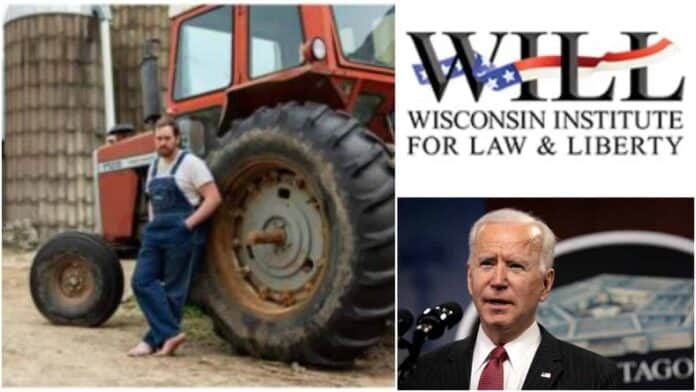 “Conditioning benefits from the federal government on the basis of race is unconstitutional.” – WILL President and General Counsel, Rick Esenberg

The Wisconsin Institute for Law & Liberty is suing the Biden administration for race discrimination in its farmer loan forgiveness program.

The plaintiffs are farmers from Wisconsin and other states. You can read the farmer loan forgiveness lawsuit here.

The lawsuit, filed in federal court, challenges what WILL calls “the unconstitutional race discrimination in the American Rescue Plan’s provision to offer loan forgiveness based on racial categories.”

WILL filed the farmer loan forgiveness lawsuit, Thursday, in the Eastern District of Wisconsin on behalf of plaintiffs from Wisconsin, Minnesota, South Dakota, and Ohio. “Each plaintiff would be eligible for the federal loan forgiveness program but for their race,” a press release says.

WILL President and General Counsel, Rick Esenberg, said, “Conditioning benefits from the federal government on the basis of race is unconstitutional. WILL is committed to ensuring that the current threats to the bedrock principle of equality under the law, something that many generations have worked tirelessly to achieve, are challenged and fought.”

Adam Faust, a WILL client from Calumet County, Wisconsin, said, “There should absolutely be no federal dollars going anywhere just based on race. The economic impact from COVID-19 didn’t hurt any race more than another as far as agriculture goes.”

“There is a case for loan forgiveness for individuals,” said Christopher Baird, a WILL client from Crawford County, Wisconsin. “But we shouldn’t be looking at the color of someone’s skin and saying this person needs more help or less help based on the color of their skin. That’s just wrong.”

According to the press release, the American Rescue Plan Act of 2021 (ARPA), President Joe Biden’s signature COVID-19 relief legislation signed in March, “provides billions of dollars of debt relief to ‘socially disadvantaged’ farmers and ranchers. But the law’s definition of ‘socially disadvantaged’ includes explicit racial classifications: farmers and ranchers must be Black or African American, American Indian or Alaskan native, Hispanic or Latino, or Asian American or Pacific Islander. Other farmers—white farmers, for example—are ineligible.”

WILL alleges that “This is illegal and unconstitutional. The United States Constitution ‘forbids’ discrimination by the federal government ‘against any citizen because of his race.’ For the federal government to distribute ‘benefits on the basis of individual racial classifications,’ the government must prove that its discriminatory benefit is narrowly tailored and serves a compelling government interest. In this case, the United States Department of Agriculture (USDA) describe their generalized goal of ending ‘systemic racism.’ But such broad goals do not override the constitutional ban on race discrimination. In fact, the Supreme Court has ‘rejected the interest in remedying societal discrimination because it had no logical stopping point.'”

WILL is asking “the court to issue an injunction and a declaratory judgment that the racial classifications in the American Rescue Plan Act’s farmer loan forgiveness program are unconstitutional.”

WILL represents the following farmers: