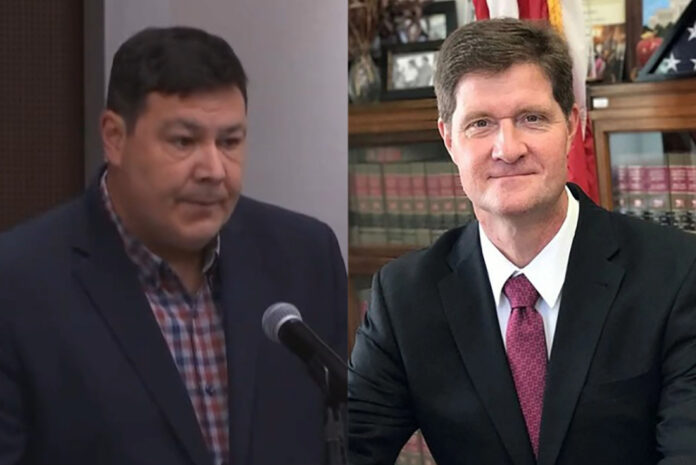 A murder victim’s son went after Milwaukee County District Attorney John Chisholm hard at Darrell Brooks’ sentencing, calling him a “coward” whose bail policies are partly responsible for Brooks being on the streets to commit the Waukesha parade attack.

“He (Chisholm) is a coward who hides from the accountability of his office’s negligence,” the victim’s son said during the Nov. 15, 2022, sentencing. “If he had a tiny single sliver of integrity he would resign. Not once has Mr. Chisholm said three simple words to these victims and families: ‘I am sorry.'”

You can watch the video here:

One man holds three people accountable for Brooks’ actions that day. Brooks. Dawn Woods (Brooks’ mother), who bailed Brooks’ out and gave him her SUV after he ran over his girlfriend. And John Chisholm (Milwaukee County DA) for his garbage bail reform. pic.twitter.com/P4mq8nLBny

The son laid into Brooks, calling him a “repulsive” narcissists, and saying that his name “brings anger and hatred into my heart.” Then he said that he holds two other people culpable for his mother’s murder: Brooks’ mother and Milwaukee County District Attorney John Chisholm.

He said that Woods enabled Brooks’ attack by bailing him out of jail after he ran another woman over with her Ford Escape and then allowed him to continue driving it.

“The other is John Chisholm, the Milwaukee County DA whose misguided and ill-conceived bail reform policies let a violent multi-convicted felon back into our community and on to our streets while already out on bail for a previous violent felony,” the man said.

“Mr. Chisholm disregarded his duty to keep the people of this community and state safe from repeat career offenders and allowed a career criminal to snuff out six innocent lives.”

Of Brooks, he said that he ” sat silently almost every day in this courtroom, bit my tongue and restrained myself from jumping over this divide…Now he gets to hear from me.”

“He is simply a repulsive man who has shown zero remorse for his actions and depraved indifference to life. His fake tears in court were never for those harmed but only for himself.”

Brooks was free on two pending felonies at the time of the parade attack, both Milwaukee County cases. Chisholm’s assistant handled the second one. Brooks was also free on bail in the earlier felony, which was handled by a prosecutor who works for Democratic Attorney General Josh Kaul, a fact the media have refused to report.