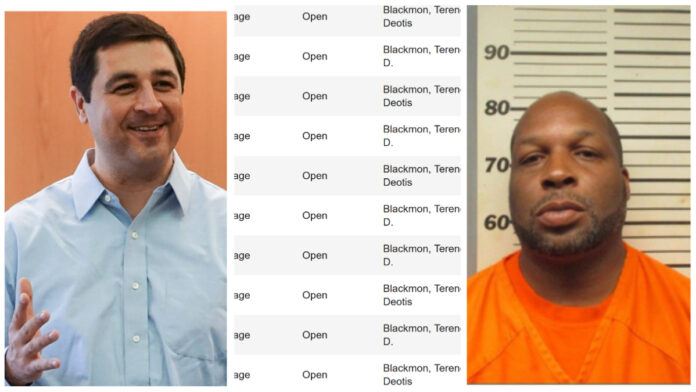 Josh Kaul touted a sexual assault charge against Terence Blackmon because it stemmed from a backlogged rape kit. But his office did not ask for increased bond for YEARS even as Blackmon reoffended SIXTY TIMES.

Terence Blackmon’s misbehavior while out on bail for rape is one of the worst and most egregious examples of an accused criminal flouting the law that we have ever seen.

For almost two years, Democratic Attorney General Josh Kaul’s office did not try to increase a signature bond for the accused rapist and alleged serial domestic abuser who has racked up 60 new criminal charges since Kaul’s prosecutor charged him with sexual assault, as the result of a backlogged rape kit, court records indicate.

On Aug. 10, 2022, Kaul’s prosecutor finally asked to amend bond. But for months and months, they did not as Blackmon committed crime after crime after crime while out on bail. Here are just some of his open cases. They are very serious. Some are for domestic violence battery and strangulation/suffocation; others for bail jumping. 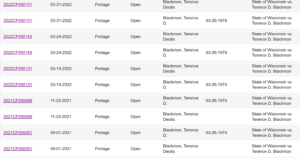 In July 2019, Kaul’s prosecutor asked for cash bond right after the long-languishing case, which is still open, was filed. The judge gave Blackmon a signature bond. That meant he could walk out the door by just signing a piece of paper.

After that point, Blackmon went on an astonishing crime spree, racking up dozens of new criminal charged and violations of pretrial supervision. The latter started in October 2020 and the former in January 2020. The case is still ongoing two years later.

That means Terence Blackmon has remained on the streets, in one of the most egregious failures to hold an offender accountable that we have ever seen – and that’s saying a lot. Go ahead; run Blackmon in CCAP, the court’s online website. The amount of open cases will blow your mind, and they came WHILE Kaul’s office continued to handle the pending rape case, for which Blackmon was released on the signature bond.

Even though he has racked up at least 18 violations of pretrial supervision and 10 new criminal cases with the collective 60 charges – most felonies – there is no indication in court records that Kaul’s office asked for higher bail to get Blackmon off the streets until August 2022 as he allegedly kept preying on the vulnerable.

Kaul touted the Blackmon charge when it was filed in 2019 because it was one of only a handful of charges to result from the testing of thousands of backlogged rape kits, almost all completed during the tenure of Republican AG Brad Schimel. Only 6 convictions have resulted from the backlogs. Blackmon’s case is one of 9 pending cases. He is accused of raping an acquaintance in her Stevens Point home.

Instead, he’s been released over and over and over and over again on low bail amounts for new charges on everything from strangulation to domestic abuse battery to bail jumping, many felonies. In fact, he’s very active on social media, where he repeatedly shares posts calling women “hoes” and that use racial slurs. He has multiple accounts.

We reached out to Kaul’s office for comment. However, his office never responds to our requests for comment.

What Kaul doesn’t tell people is how messed up the cases have become once they hit court. Furthermore, there were significant delays in processing the Blackmon case. According to the criminal complaint, a DNA analyst completed the rape kit analysis in April 2018 during Schimel’s tenure. There was a CODIS match to Blackmon. However, it wasn’t until May 2019, several months after Kaul became AG, that the rape kit DNA was compared to a DNA swab newly obtained from Blackmon. He wasn’t charged until July 2019.

You can read the criminal complaint in the case here: 7.10.19_Blackmon_Complaint. Prosecuting District Attorney Noel A. Lawrence with Kaul’s office has appeared in the case.

Here’s the timeline of the Blackmon case:

Terence Blackmon was charged with 2nd Degree Sexual Assault/Use of Force. The state, presented by Kaul’s office, asked for cash bond (no amount specified in court records; he was given a signature bond by the judge.)

For unclear reasons, documents were sealed in the case multiple times. From October 2020 through April 2022, there were 18 Justice Point violations by Blackmon, court records show (that’s pre-trial supervision conditions). In one case, court records note: “High Severity Violation Report.” There is no evidence in court records that Kaul’s office asked the judge to increase bond from the signature bond until August 2022. They could have requested a bail review hearing, or filed a bail jumping charge in the rape case, but there is no record of that happening.

Court records note at one point, “Court finds Sexual Assault Kit Investigation (SAKI) is not necessary to this case.” A jury trial was postponed multiple times, motions were filed, and Blackmon’s attorney withdrew. The jury trial is not scheduled now until February 2023.

Since that charge, Blackmon has faced the shocking number of new crimes. The new cases are being handled by the Portage County District Attorney’s office: