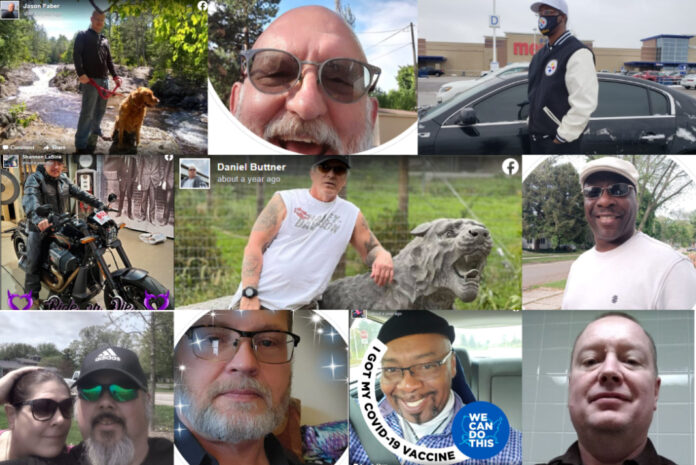 Many of the brutal killers and attempted murderers paroled during Gov. Tony Evers’ tenure are enjoying life and expressing glee about their freedom on Facebook, where they are friends with each other and giving each other public shout-outs.

A dozen or so of them appear to be connected, at least through social media, writing on each other’s walls but also sometimes visiting each other for cookouts. Many are in relationships.

For example, paroled killer Gerry Kramar posted a selfie of himself on Facebook in 2021, writing, “Doing good, enjoying life and friendships.”

What did Kramar do? He murdered Scott Alf, 15, of Beloit, in 1984, by shooting him twice in the back and once in the head at close range with a .22 caliber rifle. Sixteen at the time, Kramar was a school classmate of Alf, and they had a spat over lunch hour about food. Alf was lying down while shot. He had been riding a bicycle when attacked. Kramar was paroled in 2020.

Kramar’s comment thread immediately filled up with praise from other paroled killers and attempted killers. In addition, Kramar has had a cookout in Waupaca with a man named “Randy,” who appears to be convicted killer Randolph Whiting, who was paroled to that town after slashing the throat of a woman after a gang rape and leaving her to die in a manure pit. Kramar’s check-ins on Facebook include the Waukesha County Fair and Wisconsin Dells attractions.

Killer sniper Scott Jenkins wrote, “Hello Gerry! I’m glad that you’re doing well and enjoying life.” Jenkins is living in Milwaukee. He randomly murdered an elderly dog walker, Gladys Redlich, in Wauwatosa, hiding in the bushes with a scoped rifle, because he wanted to kill someone. Age 61, he was paroled in 2020 without his victim’s family learning about the parole hearing. On Facebook, he explains how he gets around town. He’s written about going to Mayfair, traveling downtown Milwaukee to Metro Market, shopping at Walmart, and going to the laundromat.

“Glad to hear it homie!” wrote Maurice George. George was involved in an armed robbery in which a man was shot. He and an accomplice considered the man a “lick,” but the victim ran after them. George, 43, was paroled in 2020 for the attempted homicide and lives in Milwaukee. He added that he is “loving life and freedom.”

Terrance Longsine, who was convicted, along with an accomplice, in the murder of an 80-year-old woman, shared a GIF of Simon Cowell giving two thumbs up. The 51 year old was paroled in 2019. He lives in Neenah. “Eighty-year-old Grace Brown was found stabbed to death on the living room floor of her retirement community cottage,” the court records say. “The contents of her wallet were strewn at her feet, furniture and a doormat were askew, and her car was missing. Found near Brown’s body were two notes: one vulgar and threatening.”

However, two years ago, when Longsine announced on Facebook that he was engaged, another person wrote on his comment thread:

“DIDN’T YOU MURDER AN 80 LADY? OR WAIT WHAT YOU GOING 2 SAY THE OTHER GUY DID IT? YOU JUST WATCHED AND DID NOTHING?? HOW ARE YOU EVEN FREE?? BECAUSE OF JUSTICE?? WHAT ABOUT THE JUSTICE FOR THE SENIOR CITIZEN AND HER FAMILY.”

Kramar is also Facebook buddies with Jon Wiser. Jon Wiser had done odd jobs for 86-year-old Amanda Westphal in her Juneau, Wisconsin home. In 1987, he crawled through a basement window and bludgeoned her to death with a wooden object, before raping her and dumping her body in the woods with a wheelbarrow. He was paroled in 2021 and lives in Juneau.

Dennis Noel also gave a thumb’s up to Kramar. He lives in Indianapolis. He murdered a tavern owner, was released from prison and then, along with three others, murdered a hotel custodian. He was paroled in 2019.

“What up brother,” wrote John Battiste, an attempted murderer. He ran over a woman with his car. She testified that he got out of his car, walked over to the victim, who was lying injured on the pavement and said, “I told you I’d kill you.” The victim suffered “fractures of two lumbar vertebrae, a double fracture of the pelvis, a broken right ankle, a broken rib and a pulmonary embolism. She underwent two surgeries, including an abortion, which was performed in part because of the serious pelvic injuries. She testified that she was ten to eleven weeks pregnant at the time of the incident.” He was paroled in 2019 and lives in Milwaukee.

Kramar also received a shout-out from Shar-ron Buie, who shot and killed a friend of his estranged wife in the hallway of her apartment building, shooting him 10 times with a rifle.

“Seriously though, brother it is so good seeing you look so wonderful, so happy, and so successful. Keep it going my brother and know that you are loved, cherished, and needed,” Buie wrote. He was paroled in 2020 and lives in Madison. He’s studied criminology since being freed.

Kramar also got a shout out from Shannon LaBine, who murdered a woman by shooting her in the chest and then in the head at close range as she lay moaning on the floor. LaBine has shared photos of cars on Facebook, writing with one, “New toy.” He was paroled in 2020.

He posted a picture of another couple getting married, prompting a shout-out from triple murderer Joseph Roeling, who shot his mother, stepfather, and 8-year-old stepsister in the head. “You deserve the happiness that you have found in each other randy. I’m very happy for you my friend and her as well,” he wrote. Roeling was paroled in 2021.

Also offering congratulations: Frederick Herrington, on parole for beating his 2 year old foster son to death for soiling his pants.

Paroled killer Scott Howard, who beat a woman in the head and then left her to die in an arson fire, also appears to be enjoying the good life. He has written shout outs on Roeling’s Facebook page.

Also commenting on Roeling’s page: Jason Faber, who was convicted of the attempted first-degree intentional homicide of a police officer who interrupted a burglary that he was committing. He was paroled in 2020. Faber lives in Cumberland today. “All the sights of blessed freedom and the future that’s on the horizon,” Faber wrote.

Daniel Buttner has given shout outs on Faber’s page. He murdered a mildly mentally ill Mauston resident who was found in a city park of blunt force trauma after playing dice in a tavern with Buttner. Buttner lives in Necedah.