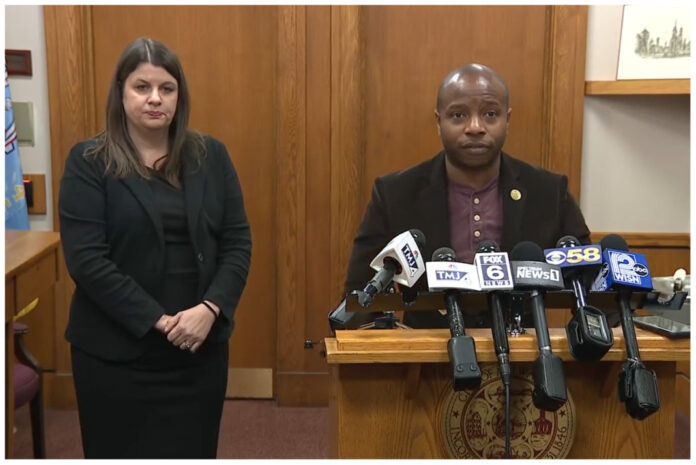 Kimberly Zapata, the deputy director of the Milwaukee Elections Commission, has been fired for seeking “fictitious military ballots” and sending them to Republican state Rep. Janel Brandtjen to highlight a potential flaw in the state’s election process.

That’s according to Milwaukee’s mayor, Cavalier Johnson, and the head of its election commission, Claire Woodall-Vogg. Although they admit she was trying to warn of a potential flaw in the election, Johnson had very harsh words for Zapata.

Zapata had been with the Election Commission for about seven years and was with the city for 10.

“The City of Milwaukee has removed the deputy director of our Elections Commission,” Johnson said. “I was stunned, absolutely stunned, to hear the very serious allegations against her. I was told just yesterday that she apparently sought fictitious military ballots from a state elections website and had those ballots directed to an elected state representative.”

Woodall-Vogg explained that Zapata “went on the public facing MyVote website.” Military voters are exempt from providing photo ID. “She was pointing out that you can go on to the public system, make up a person and request a ballot,” said Woodall-Vogg. “She sent it to a state legislative member to .. alert them to this vulnerability.”

This week, Brandtjen, Chair of the Assembly Committee on Campaigns and Elections, announced that she had “received authentic military ballots at her home address.”

Her press release noted: “Representative Brandtjen was surprised to find three military ballots sent to her home address from clerks in Menomonee Falls, South Milwaukee and Shorewood. The ballots were all addressed to ‘Holly’ with three different last names. None of these individuals reside, or have resided at her address, and the Representative did not request the ballots. After Rep. Brandtjen made inquiries, she realized these three ‘Hollys’ probably don’t exist. If they did, why would they send ballots to her house?”

Even though Zapata was trying to alert an elected lawmaker to a potential security issue in elections, Johnson said, “I will not accept. I will not tolerate and I certainly will not defend any misrepresentation by a city official involved in elections.”

He called Zapata’s actions an “egregious blatant matter of trust.”

Johnson said the situation is now in the hands of law enforcement.

“The employee in question had her access to the offices and computer systems deactivated. Her employment in the Election Commission was terminated,” Johnson said.

He noted: “She has been forthcoming of her actions.”