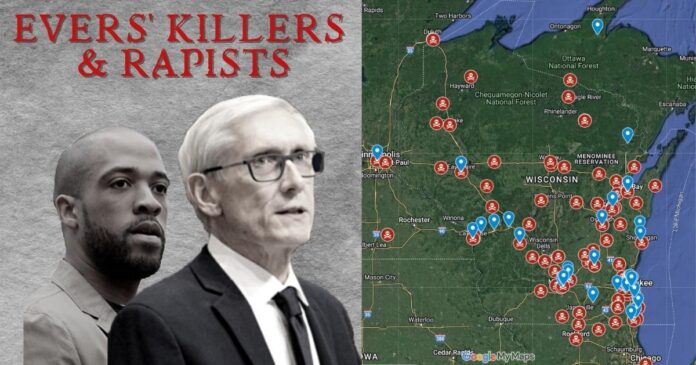 The map shows how Evers’ appointee’s parole spree has touched every corner of the state.

These paroles were discretionary.

The Evers parole map shows the location where the killers, attempted killers, and rapists have been released to, according to the Wisconsin Department of Corrections from January 2019 through the end of May 2022.

Zoom in to see the parolees’ placement throughout the state more clearly.

There are a few more on the map through October that we learned from through sources.

Not all of the killers and rapists are on the Evers parole map because the location of some are not known and/or they absconded, according to DOC.

To the heads of law enforcement agencies: If you were not notified of the release of one of these parolees, please email us at: [email protected]. State law requires the Parole Commission to notify police and sheriff’s departments in counties where the parolees will reside.

Red pins with crossbones represent released killers and attempted killers, blue pin represents rapists. Each pin expands to show the name, conviction information, race, age, date of the release and a link to the profiled story if we wrote on it.