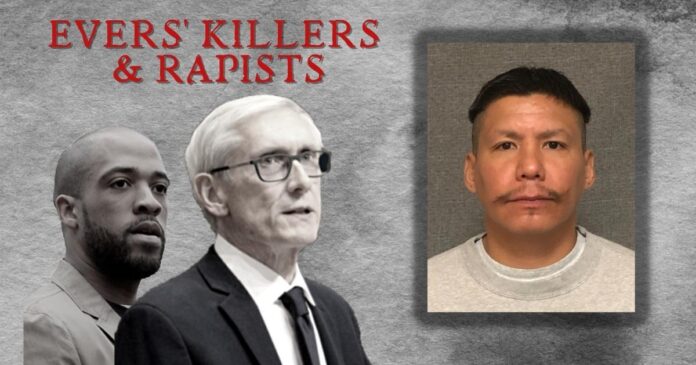 Robert Jacobson was one of them. His release was discretionary.

Robert Jacobson, now 41, was involved in a wild shootout with Forest County Sheriff’s deputies, and he was convicted of shooting at, and trying to kill, three of them.

Jacobson was paroled on October 10, 2022, according to the DOC database. Jacobson’s mandatory release date was 02/24/2025, meaning this was a discretionary parole. He now lives in Crandon, Wisconsin.

A Forest County law enforcement source advised us of the parole.

In 2000, Jacobson was convicted of three counts of first-degree attempted intentional homicide with a dangerous weapon for the 1999 incident.

This parole came just four days before Gov. Tony Evers appeared at a gubernatorial debate and tried to brush off paroles by indicating he asked his former parole board chair appointee to quit in June.

A co-actor at the scene told police “he was at home with William (another co-actor_ on the evening of August 25 when Jacobson arrived with guns. Alvin identified the two weapons found at the scene as the guns Jacobson brought. He stated the three of them drank for a couple of hours and Jacobson and William started shooting around midnight.”

Alvin said that while he was in his bedroom playing video games, the police arrived. “He then joined his brother and Jacobson in fleeing the home through a bedroom window. Alvin testified he was unarmed. Alvin further testified he spoke to Jacobson after the shooting, and Jacobson admitted he fired his weapon. Alvin stated Jacobson told him not to implicate Jacobson.”

Jonathon Czaplicki, “a twenty-two-year-old inmate who met Alvin in the Forest County jail, was later incarcerated in the same cell-block as Jacobson. Czaplicki testified Jacobson admitted that he was involved in the shootings and that he was carrying a double-barrel shotgun,” court records say.

What the attempted killer did:

We’ve obtained the criminal complaint, which you can read here: Jacobson Complaint

The complaint says that:

On Aug. 26, 1999, in the town of Lincoln in Forest County, Jacobson “did directly as a principle, and as a party to a crime” try to kill three Forest County Sheriff’s Deputies and a Crandon police sergeant. He was convicted of the first three offenses. The complaint says:

The officers were called to a shots fired call along Devil’s Lake Road. It originated from a home, and officers were told that Jacobson was involved along with another man, the latter of whom indicated “he would shoot at officers if he had to, and that someone was going to die.”

The second man, William Weso, had indicated he had just fired two shots at officers driving down the road, and gunshots were heard by two officers as they were driving. The group of officer’s responded to the home and announced their presence. Weso walked past the patio door carrying a gun. People inside were drinking alcohol.

At one point, three individuals climbed out a window, each carrying a gun. One of the individuals fired directly at a deputy. He heard the bullets pass through the brush.

At one point, court records say, “Three people had emerged from the window, talking and making their way toward” one of the deputies. He “could tell that all three people were holding guns and approaching his position.”

The complaint continued: When he returned fire, the other individuals started shooting. Officers ordered the defendants to drop their guns and raise their hands, but they heard gunshots and saw a muzzle flash coming from the back of the house toward one deputy’s location.

Two of the subjects began running toward the location of the deputies and shot in their direction. Bullets went through trees near them.

Weso and another man, Alvin C. Weso, were taken into custody. William had shells in his pocket. Alvin confirmed that William Weso and Robert Jacobson were in the house. He said that he and William left the residence through a bedroom window and that, later, Robert Jackson “had asked if he (Robert Jacobson) was the only one that shot.”