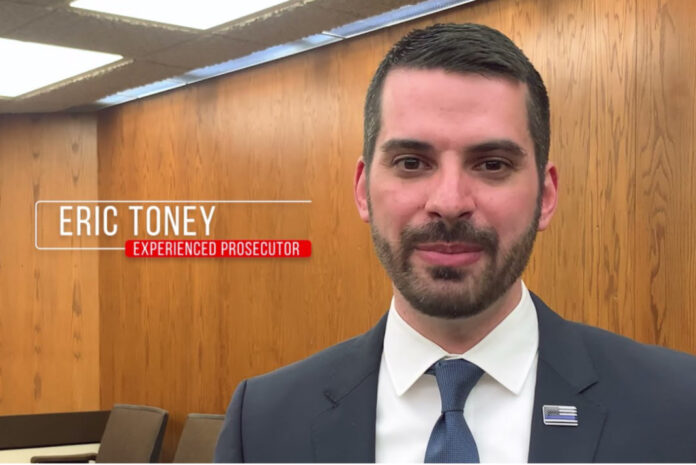 Wisconsin Right Now is endorsing Fond du Lac County District Attorney Eric Toney in the state Attorney General’s race because incumbent Josh Kaul has utterly failed on public safety, including on a critical promise he made in his first election to fix the crime lab. With violent crime skyrocketing in Wisconsin, the state can not afford another four years of Kaul, an Attorney General who is MIA on public safety but hyper-focused on partisanship.

In contrast, Toney has proven himself to be an ethical, extremely hard-working, public-safety-focused candidate and district attorney, who will remove partisanship from the “top cop’s” office by protecting the rule of law. At times, Toney has even drawn criticism from factions in his own party because he has so ethically adhered to the rule of law. This is incredibly refreshing. And it’s what Wisconsin needs.

Toney is very accessible and transparent. In contrast, Kaul has been secretive. For example, he has outrageously and disgracefully sat on an open records complaint seeking his fellow Democrat DA John Chisholm’s non-prosecutions for more than a year and a half with no explanation and is slow-walking open records requests on serious issues until the election.

The majority of Wisconsin sheriffs agree with us. Prominent crime victims do as well. Those who have worked most closely with Toney – and with Kaul – believe Toney is the best choice. Toney has bipartisan support from the law enforcement community.

In contrast, Kaul has been a partisan barb-throwing AG, absent on public safety but always willing to give cover to his fellow Democrats. He openly admits that he sees the rule of law as something he will ignore if it doesn’t match his own personal political beliefs. That is exceptionally dangerous.

The contrast could not be more stark. We urge people to vote for Toney. Toney, a Republican, is a candidate with true cross-over appeal. Kaul is a divider.

When the liberal Wisconsin State Journal endorsed Kaul this week (predictably), about all they could come up with was that Kaul was “calm” and emphasizes rape kit tracking. Noticeably they don’t mention the key ways that Kaul has failed to preserve the public safety mission of DOJ at a time of skyrocketing crime. There are so many failures that an endorsement of Kaul is not defensible.

The evidence is overwhelming. Kaul has failed to protect the community. He has been an inept manager and a very partisan AG. Toney would be the opposite.

Vote for Eric Toney on Nov. 8.