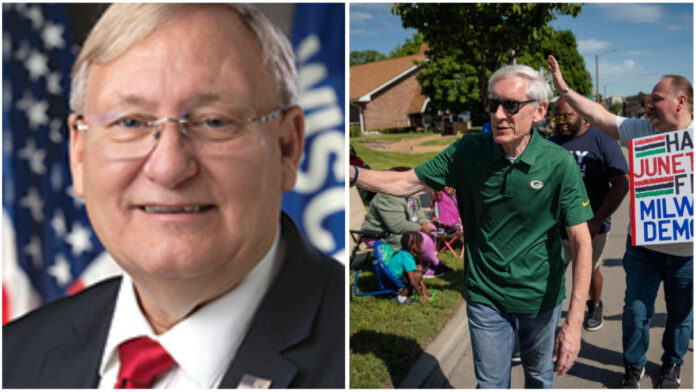 State Sen. Van Wanggaard, chairman on the Senate Committee on Judiciary and Public Safety, has written a letter to Gov. Tony Evers accusing his administration of “ignoring the constitutional rights” of Wisconsin crime victims in regard to parole hearings.

“Governor, you took an oath to uphold the Wisconsin Constitution – that includes Marsy’s Law,” he wrote. “You have an obligation to make sure your employees do the same. Please let me know in the next week what steps you will be taking to correct the Parole Commission’s ignoring of the Wisconsin’s Constitution.”

It comes the day after Evers commented to the Wisconsin State Journal that he believes the Parole system has worked and is working. The article says Evers is open to giving a voice to crime victims.

“Voters overwhelmingly approved Marsy’s Law to make sure crime victims were informed and had a voice in parole hearings,” said Wanggaard in a press release. “It’s clear as day. Victims have the constitutional right to attend hearings or have a voice. The Governor doesn’t get to be ‘open to’ it, and his appointees don’t get to decide whether victims have that right. It’s not just the law, it’s the Constitution!”

Several murder victims’ family promptly criticized Evers’ comments to the State Journal, saying the Evers’ administration failed to give them a voice in parole proceedings and now it’s too late for them to object because the killers are out of prison. They did not even know there was a parole hearing. They have sharply criticized the paroles.

This is a systemic issue. We have found multiple victims’ families who say they did not know about the paroles and/or parole hearings.

Van Wanggaard also cited new Evers’ appointee Christopher Blythe refusing to allow public comment at his first hearing running the Parole Commission. And he accused former Evers’ appointee John Tate of believing “it was up to him if victims’ could attend parole hearings.”

“This is blatant disregard for the Wisconsin Constitution and crime victims’ rights,” said
Wanggaard. “I worked for five years to make sure crime victims had a constitutional right to be heard and attend hearings – including at parole. Evers and his staff don’t get to ignore it. They must enforce it.”

Van Wanggaard was the lead Senate Author of Marsy’s Law, which ensures crime victims of certain rights in the criminal justice process.

In just the last week, wrote Wanggaard, “I have seen comments from you, your former Parole Commission Chairman, John Tate, and your acting Chairman, Christopher Blythe, that indicate that your administration is ignoring the constitutional rights of crime victims in regard to parole hearings.”

For clarity, he shared an excerpt of Article 1, Section 9m:

“Article I, Section 9m (2) – In order to preserve and protect victims’ rights to justice and due process throughout the criminal and juvenile justice process, victims shall be entitled to all of the following rights…
(2)(e) – Upon request, to attend all proceedings involving the case.
(2)(g) – Upon request, to reasonable and timely notification of proceedings.
(2)(i) – Upon request, to be heard in any proceeding during which a right of the victim is implicated, including release,…parole,…or pardon.” (emphasis added)

“As the legislative author of Marsy’s Law in Wisconsin, I can assure you that every word was debated and chosen with a specific purpose including the ones I have underlined above,” he wrote. “While your administration has stymied my efforts to obtain parole records thus far, I learned of victims’ rights being ignored in comments by you personally, and your former and current Parole Commission Chairs.”

He continued: “WisconsinRightNow.com, who apparently has received some records, has spoken with crime victims. A shocking number of victims are saying that they were not notified of a parole hearing or an early release from prison.”

Some of the issues derive from an ineffective victim enrollment system that multiple victims’ families told us they didn’t know existed. Others were or thought they/family members were enrolled in it, but stopped receiving notices or couldn’t access it for various reasons.