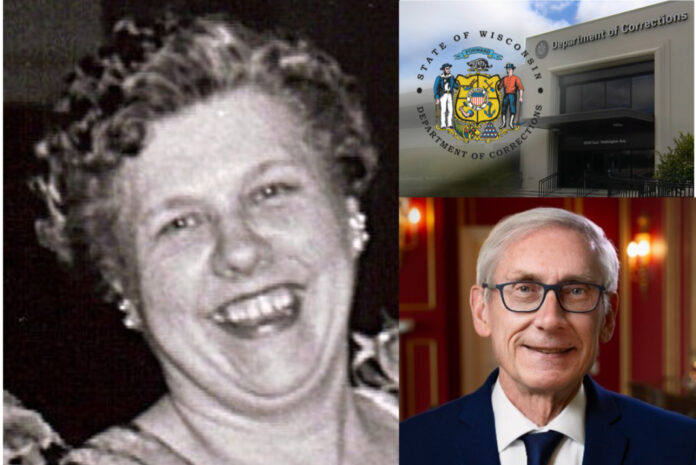 “I would bet if that were Evers’ mother lying on the street after being shot by Jenkins he would not have let him out of prison, but I guess my grandmother in his eyes is not that important,” – Mark Henke of Wauwatosa.

Two family members of Gladys Redlich, the elderly woman who was randomly shot to death by a killer sniper who hid in the bushes of a well-traveled Wauwatosa park, are “irate” that Gov. Tony Evers’ appointee released the murderer, Scott Jenkins, early on discretionary parole to Milwaukee, where he is under minimum supervision. They say they blame Evers “100%.”

Mark Henke, Redlich’s grandson, told Wisconsin Right Now that he is “irate – very irate” that Jenkins was released early. Henke and his wife, Cathi, said the family did not even know Jenkins was up for parole.

“By the time I heard about it, it was too late,” Mark said of the parole. “We feel totally helpless. Nobody knew what to do.”

The parole “really has me fuming,” Mark Henke says. “To me, it’s a life sentence. A first-degree murderer should never be released. He should never see the light of day. You did what you did. I could care less if he’s rehabilitated in any way, shape or form. When you take someone’s life, I’m sorry, but you should never be let out.”

The murder of Gladys Redlich, an active bowler and widow, was horrific. Jenkins, now 61, hid in the bushes with a sniper rifle because, he told police, he wanted to kill someone. He missed a jogger and shot a camper first. Then, he trained the sight on the little old lady, who was walking her schnauzer dog down the sidewalk in the Menomonee River Parkway, shot her in the chest, and then pretended to be a passerby trying to give her aid. Redlich, 76, died in the 1983 attack. It’s one of many cases of brutal killers and rapists paroled by Evers’ two-time appointee. The governor has not commented on the cases.

Mark said he believes Evers and Lt. Gov. Mandela Barnes are “letting killers back on the streets to try to save dollars.”

The Henkes told Wisconsin Right Now that they received a call this week from Elizabeth Lucas, the director of the Office of Victim Services for the state Department of Corrections. That’s a state agency under Evers’ direct authority run by a cabinet appointee of the governor’s. The Henkes said that Lucas apologized to them for the victim notification problems.

They’re terrified that they can’t find out exactly where Jenkins lives in the City of Milwaukee. They say that Lucas, whose office is in charge of victim notifications, would not tell them where exactly Jenkins lives. She also revealed that Jenkins is only on minimum supervision.

The Henkes say the family did not know about the parole hearing, even though a relative was notified of the parole after-the-fact in a letter when it was “too late” to stop it. Commission Chairman John Tate testified that the Parole Commission notifies victims of parole grants, largely using a notification database maintained by the DOC office.

Their story is part of a pattern. We have found multiple families who say they were not aware that the killers of their loved ones were even up for parole. In fact, last May, a wife killer’s parole was revoked after outcry from a victim’s family that did not all receive a notification.

Mark said he blames Evers “100%” for the parole. Evers reappointed Commission chairman John Tate, who had authority over the release, after he freed Jenkins, saying he was “pleased” to do so.

“You can bet when I come to vote, I will not vote for him,” Henke said of Evers. Mark and Cathi did say they want it noted that the family is divided on this question; some family members don’t blame Evers and believe there are other issues at play, such as prison overcrowding, they said.

Mark Henke told Wisconsin Right Now that his dad, Redlich’s son-in-law, was signed up for the victim notification system at one point and wrote the parole board repeatedly objecting to Jenkins’ release. But the dad died a couple of years ago. Lucas told them that his enrollment was deleted at that time without further outreach to the family. She told them another relative was in the system and that a notice was generated in the notification system online.

However, they believe that the relative is an elderly person who isn’t comfortable with the Internet. In short, it all added up to the state doing nothing proactively to make sure family members knew about the parole hearing, and the family not learning Jenkins was up for parole when they could have tried to stop it.

State law says a reasonable effort must be made to notify families.

“He was logged in and had an account for that website,” Henke says of his dad and the victim notification system. He said the family has his dad’s login credentials, but they no longer work.

The state Department of Corrections says Jenkins, now 61, was granted parole on March 17, 2020, and he lives in Milwaukee. On social media, Jenkins describes moving throughout that community, going to Mayfair Mall, Metro Market, and the laundromat. The parole was discretionary. Killers serving life sentences do not qualify for mandatory release.

Corrections releases killers’ cities but not their exact address, unless they are registered sex offenders, which Jenkins is not.

“I live in my grandmother’s house today,” Mark says, noting that, at the time of the murder, Jenkins “lived literally two blocks up the street. For all we know, he could be blocks away. I’m concerned he could be right next door to me, and what makes me think he is rehabilitated?”

Cathi Henke, Mark’s wife, noted that Lt. Gov. Mandela Barnes is part of the Evers’ administration too and criticized both Evers’ and Barnes’ soft-on-crime philosophy. Both men have called for emptying the prisons by 50%. Barnes said on video that he thinks reducing the prison population is “sexy.”

“I find it reprehensible that the word he (Barnes) used is ‘sexy,'” Cathi said. “It’s disgusting.” Of Evers and Barnes, she said: “They’re making our streets less safe, which is frightening.” She said Barnes’ comment was “sick.”

Mark explained that Gladys and her husband used to run a butcher shop in Milwaukee. They built their home in Wauwatosa in the early 1960s. It was supposed to be their retirement home, two blocks off the Menomonee River Parkway.

His grandfather passed away first. Mark had just left the Navy when he got the news that his grandmother was murdered.

She was 76 when she was shot to death, but she was a very active woman, he said. “She was still bowling with a 16-pound bowling ball,” he said. “She took walks every day. She took her dog literally to the parkway and walked her dog every day.”

The day of her death was a quiet Saturday morning at 8 a.m. in 1982. As usual, Gladys took her schnauzer dog for a walk. Jenkins, then 21, shot her in the back. The bullet exited her chest.

“I put the scope on several people, and then I shot the old lady,” Jenkins told police, according to a 1982 article in the Marshfield News-Herald.

Creepily, after murdering her, Jenkins jogged toward Gladys Redlich as she lay bleeding on the sidewalk and pretended to be a passer-by who came to help the dying victim he had just shot.

“She was in the wrong place at the wrong time,” says Mark. “By the next time I saw her, it was in a casket.”

They were told she was shot and killed. The killer, Jenkins, who later told police he wanted to kill someone, had first taken shots at a camper off an overpass (narrowly missing a child inside) and missed a jogger.

He sat in the bushes in the parkway with a rifle fitted with a scope, and he trained it on Gladys Redlich. The sniper shot the elderly woman, killing her. Her dog was found standing at her side.

Cathi said Gladys and her husband took in many foster children over the years. They were a family of eight. Gladys was “warm and caring; she loved her family.” She had a standing Sunday dinner for her kids and grandkids on Sundays.

They believe that Jenkins targeted Gladys because he had missed the younger jogger, and she was a “nice, slow-moving target, an old lady with a dog.”

“He was hiding in the bushes.”

Cathi said she “doesn’t feel safe.” She said the death was a “terrible loss to the family” and Jenkins “doesn’t show any remorse. He’s out and can live his life now, but the victim doesn’t return when he gets out. Grandma is still gone.”

The crime’s randomness is chilling. “The part that bothers me is he didn’t have any knowledge of the person,” Cathi said. “He didn’t have any quarrel with her. He randomly chose a victim. What makes you think he wouldn’t again?”

Mark wrote an email to the Parole Commission. At first, he received an automated response. He demanded to know whether the board communicates with the immediate family to let victims know killers may be released. He declared himself “very disappointed” with Tony Evers and asked, “how are we to know this piece of garbage was released? For all we know, he could live by us. Is there supposed to be any communication with the immediate family?”

He eventually received the call from Lucas.

Cathi said she believes Evers and Barnes are responsible because their administration “appointed a person who wants to help clean out the prisons to help save taxpayer money. That’s not in the best interest of the communities and residents of the State of Wisconsin.”

Cathi believes the Milwaukee media are “suppressing” the information about the parole. “The community needs to know who is walking the streets,” she said, adding that the parole was “done and swept under the rug.”

Jenkins is one of the paroled killers Wisconsin Right Now has profiled. He is one of a string of killers and rapists released in discretionary paroles by Evers two-time appointee. Evers reappointed chairman John Tate, who has since quit after Jenkins was freed. We also found a series of other victims’ families who were not notified of the paroles and/or parole hearings.

“Once I read that article (in Wisconsin Right Now), I felt a little more motivated to figure out what’s going on,” said Cathi. “To make people aware. I am not happy.”