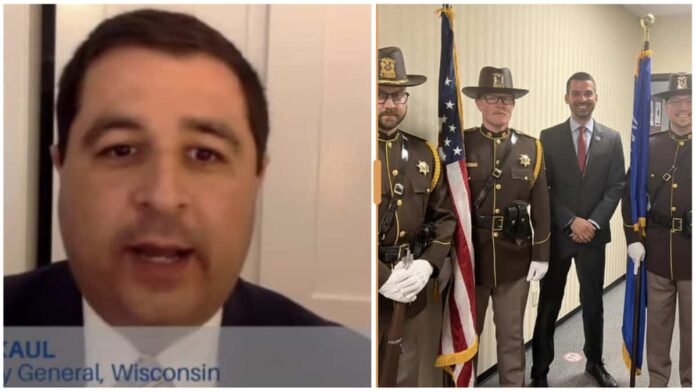 It’s very unusual that law enforcement and DAs have so firmly turned their back on the man who holds the position considered by many to be the state’s “top cop.”

Democratic Attorney General Josh Kaul has only been able to get 5 of the state’s 71 Wisconsin district attorneys to support his campaign, laughably calling it a bipartisan “coalition.”

His Republican opponent, Fond du Lac County District Attorney Eric Toney, the president of the Wisconsin District Attorneys Association, has the support of 30 district attorneys, 28 who are sitting DAs and two who are retired.

Kaul’s bizarre attempt to turn a measly 5 DAs into a “coalition” is reminiscent of the wording used by Democratic U.S. Senate candidate Mandela Barnes, who initially announced a grand total of 9 law enforcement endorsements before 2 fell off the list (one said he didn’t actually endorse him).

But it’s especially shocking that law enforcement and DAs have so firmly turned their back on the man who holds the position considered by many to be the state’s “top cop.”

“I’m honored and excited to endorse Eric Toney for attorney general,” Racine County DA Patricia Hanson said. “He’s a proven, tough-on-crime prosecutor who’ll work with local law enforcement to clean up the mess Josh Kaul has made at the Department of Justice.  Crime in Wisconsin is surging, and we do not have time for on-the-job training.  He’s the only candidate who has managed a team of prosecutors and utilized the resources of the DOJ to keep our communities safe. Eric Toney will make an excellent ‘top cop’ for Wisconsin.”

See the rest of Toney’s law enforcement endorsements here. We’d link to the rest of Kaul’s, but he doesn’t have any.