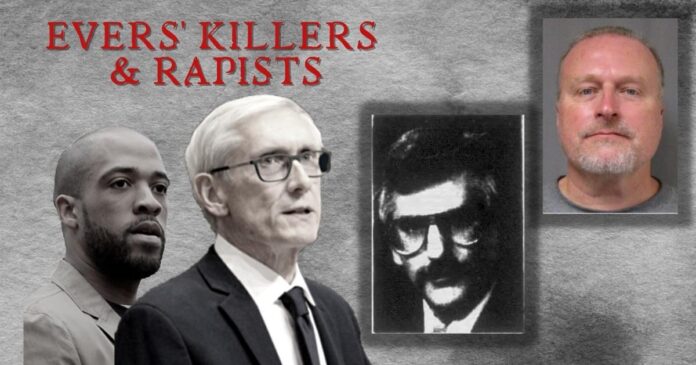 Eric Nelson was one of them. His release was discretionary.

In a slaying that rocked the Kenosha County community, a beloved foster dad named Joseph Vite was ambushed and executed by his foster son and the son’s high school classmate.

The foster son was obsessed with Dungeons and Dragons, but the slaying was senseless, and the jury rejected that defense. Prosecutors argued the killers, Daniel Dower and Eric Nelson, just wanted Vite’s car and money.

“They set up an ambush in the darkened Vite house,” a 1985 article in the Kenosha News reported. The victim’s wife, Mary, discovered her husband’s body.

According to the Kenosha News, during the trial, the prosecutor said both defendants “waited in the darkened home for Vite to return home from work. When he entered the front hallway, Dower allegedly fired a .22 caliber rifle twice from the living room, striking Vite once in the elbow.” According to the prosecutor, “Eric Nelson fired the fatal shot into the head of Joseph Vite.”

In 2019, when Nelson was up for parole, the victim’s family, the Democratic DA, Sheriff, and County Executive, and many citizens fervently opposed his release. More than 3,000 people signed a petition to stop Nelson from getting out.

Democratic DA Michael Graveley agreed that Nelson should not be released. In 2019, according to the Kenosha News, Gravely said: “This is an individual we need to be protected from now as we did in 1985. I don’t think there’s any credible way to say a heinous act such as this is one that we can say, even with the passage of time, would not pose an unreasonable risk to the public. I am opposed to the release of Eric Nelson.”

It didn’t work. Tony Evers’ appointee to the Parole Commission released Nelson anyway the following year. Evers reappointed John Tate the year after that, saying he was “pleased to do so.” 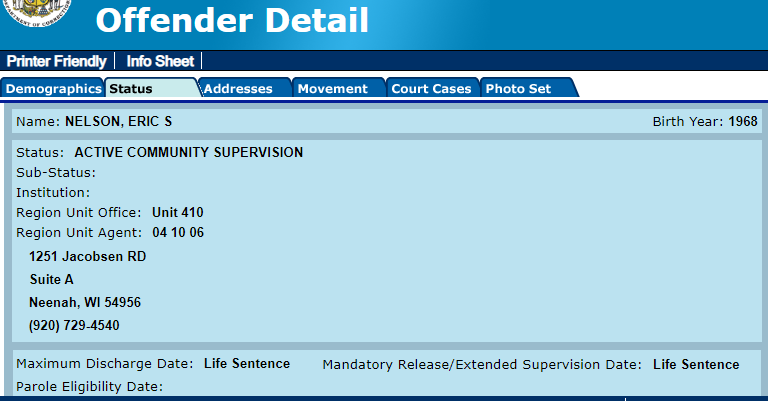 Who was Joseph Vite?

His brother Charles says Joseph was 41 years old when he was murdered. He was hard-working, and over the years, he fostered about eight foster children.

“He was family-oriented and always there to lend a hand to anybody,” says Charles.

Dower had been Vite’s foster child for about six years. Nelson was a friend of Dower’s who did not know Vite.

“He (Dower) was a kid that was at all our family functions. He was a part of the family; he played with my daughters,” says Charles, adding of his brother and his wife, “They wanted to help people out. He was doing very well.”

The murder of Joseph Vite was committed by his foster son, Daniel Dower, and a classmate, Eric Nelson. Both were 16 at the time.

Nelson testified that Dower killed Vite with a “sinister laugh, like in science fiction.”

Nelson told the court he had been recruited by Dower.

The pair wanted to steal Vite’s money, car and weapons, according to the Kenosha News, which said Joseph lived in Bristol.

A 2019 Kenosha News article described Joseph Vite as the “oldest of six siblings in a large Italian-American family and a well-respected businessman who served the community as an American Family Insurance agent.”

The judge, Bruce Schroeder (who was later the Kyle Rittenhouse judge), described the murder as an “assassination.” 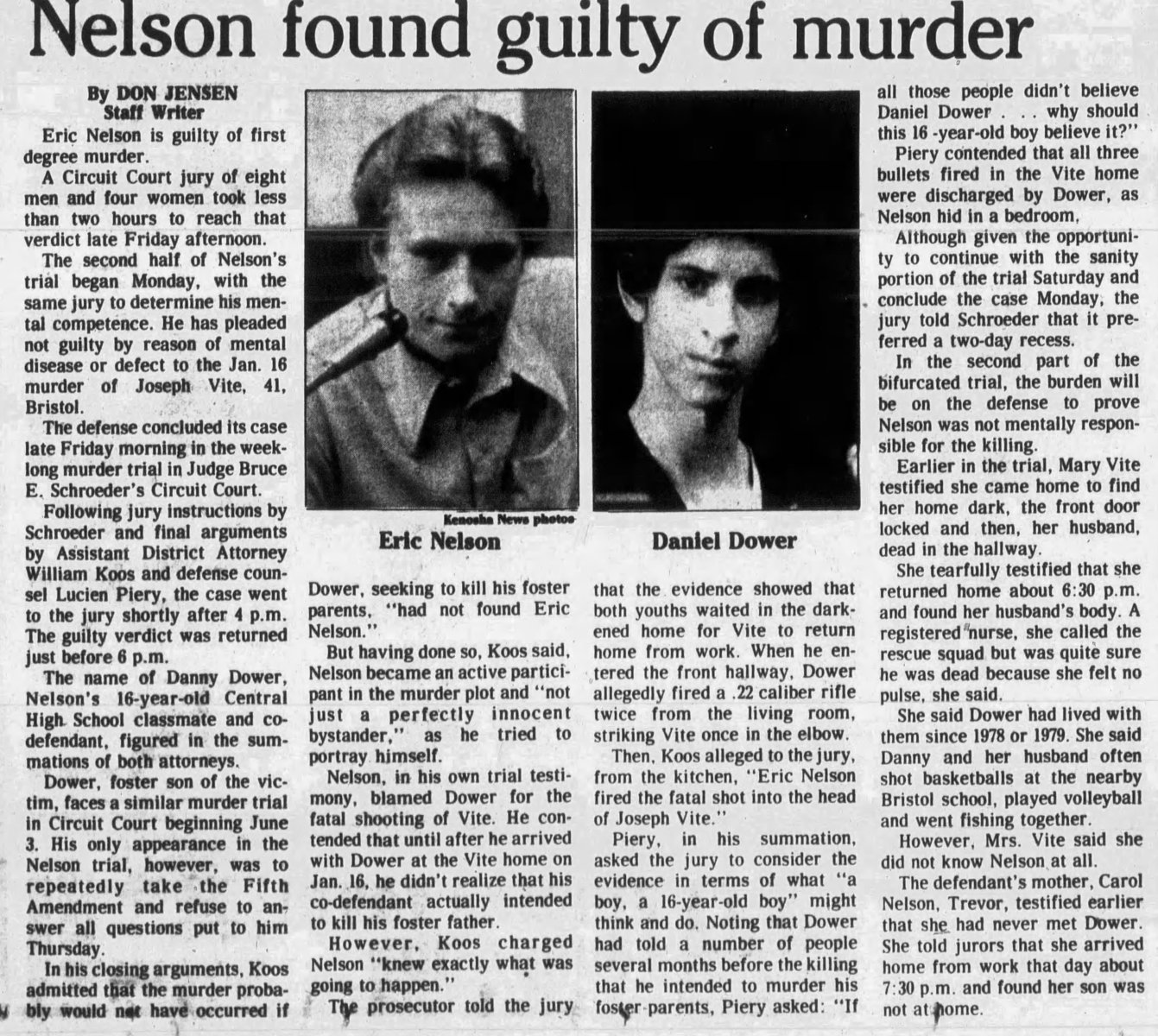 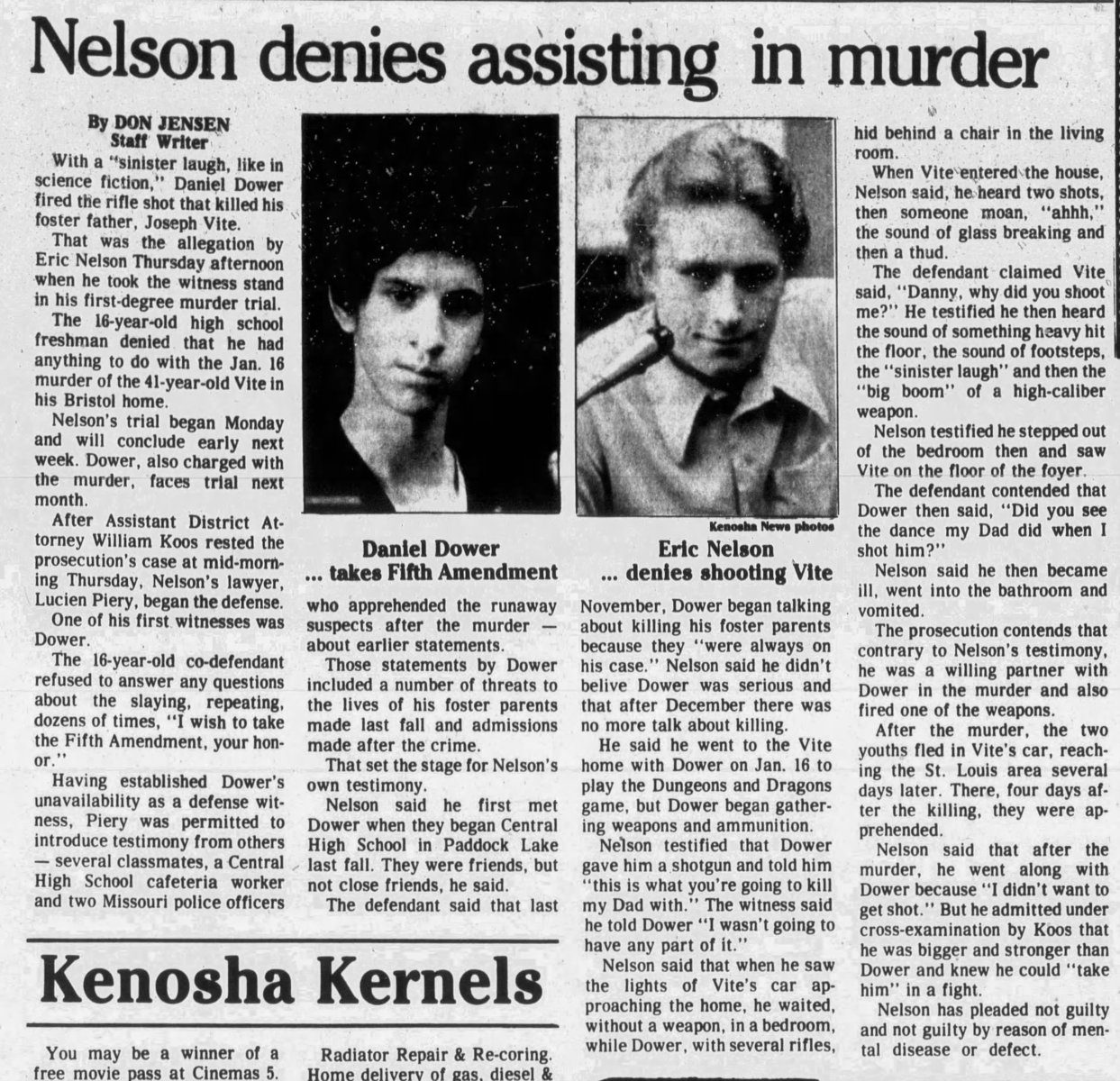