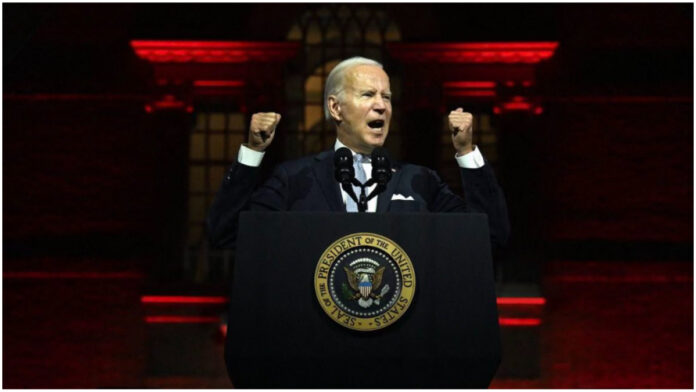 President Joe Biden chose a dramatic red background for his speech trashing “MAGA Republicans” on Thursday, Sept. 1, 2022, but it didn’t create the effect he intended.

In fact, the Biden speech red background reminded a lot of people on Twitter of the gates of hell or a certain German dictator. Others noted that Biden’s fury didn’t exactly add up to unity. And some people pointed out that Biden was directing his anger at many fellow Americans.

Joe Biden arguably delivered the most divisive speech in the history of the American presidency.

Angry man smears half of the people of the country he is supposed to lead & promised to unite pic.twitter.com/Bfa84JBamM

“There’s no question that the Republican Party today is dominated by Donald Trump and the MAGA Republicans,” Biden said in the speech at Independence Hall. The Hall was also lit up by blue lights, but when the camera was focused on Biden, all you could see was red.

This image speaks for itself pic.twitter.com/giZ6hi1OM4

“Much of what’s happening in our country today is not normal,” said Biden.

Wisconsin GOP gubernatorial candidate Tim Michels tweeted, “President Biden’s bitter campaign speech tonight spoke to his base and his allies in the mainstream media who televised his 30 minute campaign commercial for free. I’m sure they loved it. He listed grievances of the past, but ask yourself why was the speech given now?”

Petition to make this Biden’s picture on Wikipedia pic.twitter.com/3o4SU23wsj

Kimberly Guilfoyle tweeted, “In November, MAGA Republicans will lead us to the biggest red wave in the history of our country & we will win the battle for the soul of our nation!”

The White House is trying to lean into the hilariously farcical “Dark BRANDON” vibe right now and all it’s doing is proving the authoritarian instincts of the hard left Biden has chosen to represent. Look at KJP’s clothes lately. White black and red. Very “reich”. pic.twitter.com/WvLGn6pwa0

“Biden is the most condescending president of my lifetime,” Nikki Haley tweeted. “He’s done nothing to unite the nation. Nothing to bring healing. Nothing to alleviate the pain millions of Americans feel everyday. He’s been a divider in chief and come November he must hear from all of us.”

No way this background (scary red lighting) this tone (angry, negative, snarling) this purpose (attacking one group of Americans) adds up to a win. pic.twitter.com/Cra4jkPgYB

Ari Fleischer tweeted, “Biden is the most divisive, over the top, rhetorically vile, bumbling, inarticulate president in history.”

"You want to go with a nice, uplifting background color?"

Tom Cotton wrote, “After much soul searching, President Biden has decided the greatest threat to American values are his political opponents.”

Oh yea we’re the violent ones, sit down Joeseph pic.twitter.com/S7E703qLwD