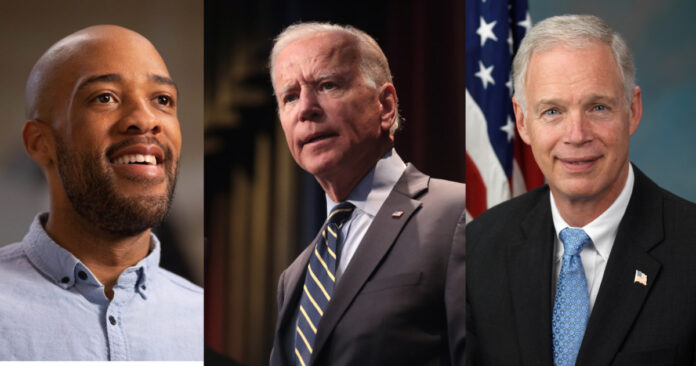 “I’m not surprised by the lack of thoughtful reaction that our friends on the left have to criticism of a presidential decree spending $ 300 billion. No one – on the left or right – should want to have a President to have that power. The statutory justification is laughable,” – Rick Esenberg, president of the Wisconsin Institute of Law and Liberty

Lt. Gov. Mandela Barnes is in full support of President Biden’s plan to cancel up to $20,000 in student debt, even as battleground Democrats across the nation are critical of the plan. In fact, he wishes it was expanded.

The Mandela Barnes campaign recently stated that Biden’s plan will “help Wisconsinites” – two-thirds of whom do not have college degrees.

Barnes’ support for Biden draws a sharp contrast with the views of Republican Sen. Ron Johnson, who opposes the plan. “70% of the $300 billion inflationary spending will go to people in the top 60% of earners. Democrats have become the party of the elite,” Johnson said.

It also earned the liberal Barnes a rebuke from the state Republican Party.

“Actions speak louder than words,” the state GOP said. “It’s clear that Barnes is in full support of Biden’s plan to cancel student debt and further hike inflation. This is unfair to the students who had already paid off their college debt and the hardworking taxpayers of Wisconsin who are stuck with this burden.”

Continued Esenberg, “t does have to do with class. Those ‘deplorables’ without a college degree get nothing because, in the eyes of our friends, they deserve nothing. They’ve got their God and their guns. But if you are unable to understand why we don’t want billions to be spent by executive decree (imagine what Trump would do with that), don’t whine about threats to democracy.”

He added: “And if you can’t understand that blue collar people might have the same problems that you and your friends have, don’t clamor about a failure to understand ‘the other.’ To do that, you can’t build and burn down the straw men that you imagine your opponents to be. Not only is that unhelpful and unilluminating. It’s boring. Learn a new song.”

A majority of Americans think inflation will rise if President Joe Biden goes through with the program, according to a new poll.

The CNBC/Momentive survey found that 59% of those surveyed said they are concerned forgiving the debt will make inflation worse.

More than 40 million Americans could see their student loan debt reduced or eliminated under the plan President Biden announced Wednesday. However, the plan has sparked furious criticism for forcing people, including blue-collar workers who did not go to college, to pay for the debt of others. In addition, people who responsibly paid off their own student loans will have to pay, through tax dollars, for people who have not.

Biden is erasing $10,000 in federal student loan debt for those with incomes below $125,000 a year, or households that earn less than $250,000. He’s canceling an additional $10,000 for those who received federal Pell Grants to attend college.

Biden also extended a pause on federal student loan payments for what he said was the “final time.” The pause is now set to run through the end of 2022 and payments to restart in January, 2023.

What did Barnes say? According to the Milwaukee Journal Sentinel,

Barnes spokeswoman Maddy McDaniel added: “The Lt. Governor knows the (Biden) plan will help Wisconsinites but thinks it should have also included support for technical education. We need a middle class tax cut so people can keep more of what they earn regardless of if they go to college.”

Wisconsin Right Now reached out to the Mandela Barnes campaign with further questions, but they failed to respond.

He called the plan “grossly unfair to families who didn’t send their kids to college or managed to pay off their student debt. 70% of the $300 billion inflationary spending will go to people in the top 60% of earners. Democrats have become the party of the elite.”