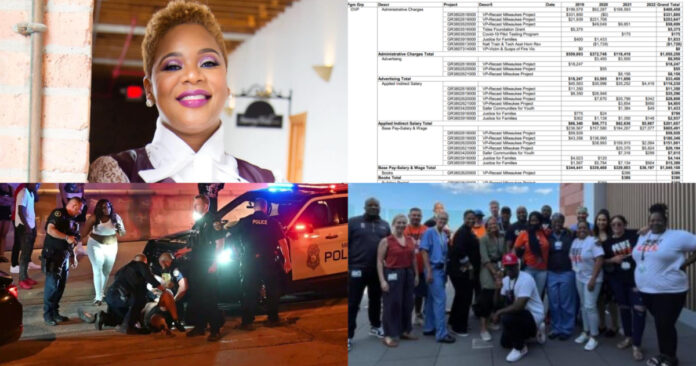 WRN filed an open records request last February to examine the Milwaukee Office of Violence Prevention’s detailed expenditures for 2019, 2020, and 2021. Our request was filled in August, 3 days after the announcement that Ashanti Hamilton, who has a child abuse history, will be the new head of OVP.

The Milwaukee Office of Violence Prevention – which is heavily pushed by Democrats Tony Evers and Josh Kaul – blew over $6 million in the past three years on consultants, administration, auto allowances for staff, travel, and other activities without an obvious link to immediately stopping crime, Wisconsin Right Now can reveal.

The office gave Legal Action of Wisconsin Inc. more than $261,000 for activities including “civil legal services.” That agency provides civil lawyers to low-income people, but it’s unclear how that helps stop violent crime.

OVP gave the UW-System Board of Regents more than $231,000. Some of that money was for a RECAST program that tackles trauma in neighborhoods.

According to open records obtained by Wisconsin Right Now from the City of Milwaukee, from 2019-2021, the office spent almost all of its total budget on consulting and administration, including salaries and wages. The office has not demonstrated a proven ability to impact crime; however, it has enriched a lot of consultants who hold workshops, symposiums and seminars, some of them virtual.

The office gave more than $14,000 to a woman, Monique Liston, who is described as a “joyful militant” in her biography and who has written Facebook posts that say things like, “defund white philanthropy,” adding, “Don’t ask for reparations. I demand…I strongly support defunding police as a community safety and resilience measure.” She also wrote, “Whiteness and sustainability are antonyms. You can’t maintain whitness (sic) and create sustainable EQUITABLE futures.”

“Sustainable liberated futures for BIPOC folks does not include whiteness in leadership….Your organization’s DEI STRATEGY (Diversity, Equity, Inclusion) must take whiteness to task as a concept, practice, expectation and technology in the workplace,” Liston wrote.

The Milwaukee Office of Violence Prevention also gave money to Khalil Coleman, the BLM leader who is now in prison, convicted of a failed drug house robbery in Kentucky. And they gave Democratic state Rep. David Bowen $500 for a speaking engagement. Both Bowen and Coleman were present at the scene when two police officers were assaulted and had a gun discharged near them.

Another group, Uniting Garden Homes Inc., received almost a million dollars, for a variety of activities, many of them Ceasefire and RECAST project events.

Overall, the office has spent:

In addition, other expenses included:

The grand total spent over those three years was $6,251,276. You can see the full document here:

The Milwaukee Office of Violence Prevention is now even more flush in cash, due to Tony Evers and Josh Kaul.

Evers, with Kaul at his side, announced last October that $8 million more “will go directly to the City of Milwaukee’s Office of Violence Prevention.”

“The sooner that those funds get used the better,” Attorney General Josh Kaul said.

That’s far more than Evers has given the Milwaukee Police Department, which is reeling from double-digit staffing decreases.

Democrats have used the Milwaukee Office of Violence Prevention to posture like they are doing something about crime because it doesn’t play with their “woke” base to support police or tougher sentencing laws, the real measures that could make an immediate difference on public safety.

This all comes at a time when Milwaukee is experiencing record numbers of homicides, auto thefts and other violent crimes, raising serious questions about the office’s effectiveness in combating crime.

It’s obviously good to have some community programming, and some of it is useful, but it’s coming at the same time the city has depleted the number of sworn officers on the street by at least 18%, leaving a force that isn’t even arresting people for misdemeanor warrants anymore.

You can see the OVP’s detailed vendor payment expenditures here: